The December FOMC rate decision is just around the corner and while this may be the final rate decision for the Fed in 2021, it’s also lining up to be one of the most eventful in years.

The bank has been pushing very loose monetary policy ever since the pandemic came into the equation, but the FOMC was already pretty loose and passive before that. After hiking seven times in 2017 and 2018, the Fed had to backtrack in 2019 to cut rates three times. They held out the hope that they’d soon be able to normalize policy and after those three 2019 rate cuts, stocks simply jumped up to another fresh all-time-high. But, when the pandemic came into the equation the bank needed to act and they did so by triggering a massive onslaught of stimulus.

In Jerome Powell’s own words, there was ‘no limit’ to what the Fed could do with the liquidity programs available to them. And those programs worked wonders as equities continued jumping to fresh all-time-highs, even as recently as last November.

But we’re at the stage of the show where we have to ask when the bank might start to turn the strategy in the other direction. There’ve been signs that this is due, with inflation raging throughout the year until last Friday’s print came in at a 39-year high of 6.8%. Of course, 39 years ago the United States was dealing with stagflation and a real quagmire of a monetary situation, but the FOMC has continually said that they think these inflation statistics are transitory and set to recede. So, for fear of derailing the recovery, the bank has avoided any tough actions to temper inflation, and tomorrow we find out just how motivated they are to address the rising prices that have started to create so much worry.

As looked at earlier this morning in the preview for U.S. equities, expectations are high. Rates markets are currently showing a median expectation of three hikes next year with a 61.5% probability of at least three hikes. There’s even a 31.8% probability of four hikes or more, which would be a reactive Fed hurriedly working to stem inflation at some point next year should it prove to be even less transitory than initially hoped.

The Fed first started talking up rate hikes before even announcing the start of tapering bond purchases. This was at the September FOMC rate decision, and it helped to kick start a run of USD-strength that remains in-play today.

The Q4 technical forecast for the US Dollar was set to bullish and that move started to run even before the start of the fourth quarter. That bullish breakout continued to run into late-November, at which point the Omicron variant showed up and created a bit of concern for economic trends.

But, as stocks brushed that fear off the US Dollar has remained range-bound at a really big spot on the chart, bound by two longer-term Fibonacci levels at 95.89 and 96.47, the latter of which was the final target in the Q4 technical forecast. That range is now three weeks old, and tomorrow’s FOMC rate decision is likely to drive this in one direction or the other.

A faster wind-down to asset purchases could help to push the long side, but realistically traders are probably going to want to see at least two rate hikes in 2022 via the dot plot matrix to get excited for topside trends. 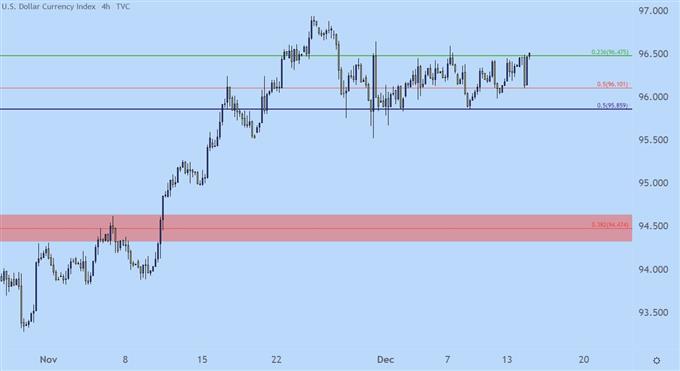 I’ve probably said or written this phrase over 100 times in this recent USD breakout but, the US Dollar will have a very difficult time continuing to move-higher without at least some bearish participation from the Euro.

The single currency makes up more than 57% of the composition of DXY so this makes sense. But, as warned a few weeks ago, EUR/USD was coming up on a massive support zone that has since stalled the decline.

The support is delineated by two longer-term Fibonacci levels, at 1.1187 and 1.1212 respectively. Since holding the low in late-November, a symmetrical triangle has formed, indicative of indecision; but as shown yesterday, this can also be perceived as a bear pennant when taking the prior bearish trend into account.

But – if the US Dollar is going to breakout, it’s going to need EUR/USD to breach the 1.1187 level that currently marks the bottom portion of this support zone. And to make matters even more interesting there’s an ECB rate decision on the docket for the morning after the Fed. 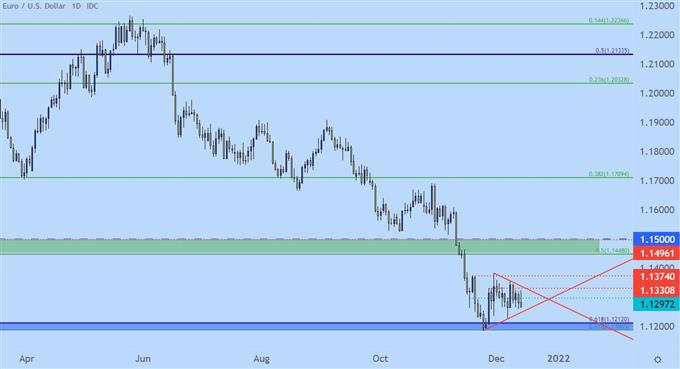 I’ve talked about this setup a couple of times over the past week, first on Thursday and then again over the weekend in the British Pound Technical Forecast.

GBP/USD is sitting atop a major support level which offers a bit of confluence from the bottom-side of a bull flag to go along with a Fibonacci level. The 38.2% retracement of the 2020-2021 major move rests at 1.3167, and that’s currently helping to mark the 2021 low in the pair.

At this point, with price holding support at the 38.2% retracement of that prior move along with the bull flag that has yet to be invalidated, there could be some bullish scope here. There’s also expectations for the Bank of England to hike next year, so there could be some fundamental drive, as well. But, at this point, the chart remains putrid for bullish setups, so this would need to see some topside price action to justify bullish strategies around tomorrow’s rate decision.

And there’s a rate decision out of the U.K. on Thursday morning, as well, to go along with the ECB rate decision. 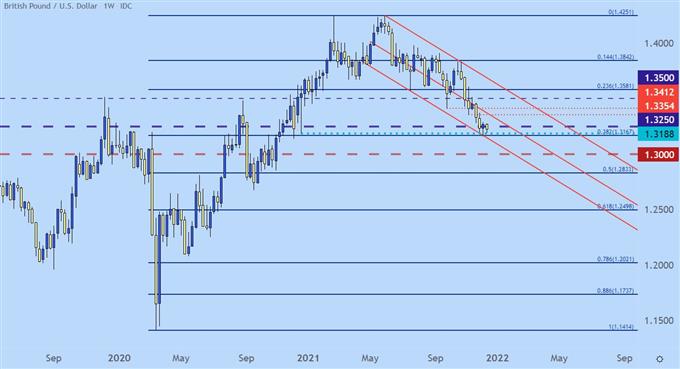 I’ve been following this one for some time, but last week offered a 38.2% pullback in a recent major move in USD/CAD, and the pair has already pushed back up to re-challenge the highs.

I had previously warned of resistance at 1.2850, which led into that drop ahead of the Bank of Canada rate decision last week.

But, now that prices are about 200 pips higher from last week’s support test, the door remains open for bullish breakout potential.

Canadian inflation is due tomorrow morning, ahead of the FOMC rate decision. 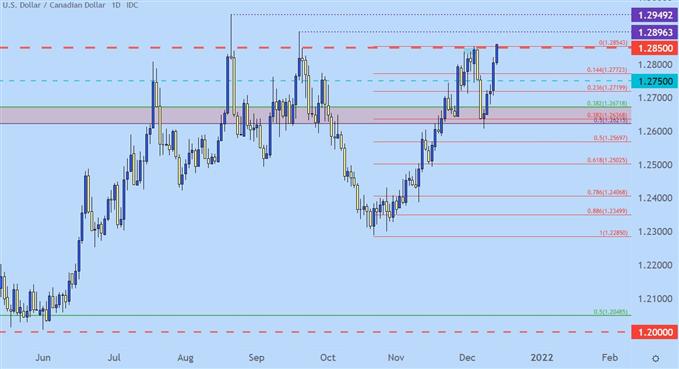