This morning’s Bank of Canada rate decision went largely as expected with no major changes to rates. The BoC does remain optimistic on growth and somewhat cautious on inflation, expecting CPI to remain elevated through the first half of 2022 and easing back towards the 2% target in the second-half of the year.

The immediate reaction was a quick jolt of CAD weakness but 30 minutes after the announcement, there’s yet to be significant run on that theme with prices remaining somewhat near their pre-release levels. But, as discussed yesterday, both CAD/JPY and USD/CAD are at big spots on the longer-term chart, and likely, will need a greater push to spark any fresh trends.

That spark may be nearby: Oil prices sit at a key spot of resistance following a very noticeable reversal from last week. I had highlighted an important zone of long-term support coming into play in Oil last week, and that zone has since helped to substantiate a +16% movement from last Thursday’s low.

At this point, Oil prices remain at the neckline of an inverse head and shoulders pattern, which can justify bullish projections with eyes on the next level of resistance around the 74 handle. This can drive some additional CAD strength should that resistance around 71.62-72.00 start to give way.

But there are other concerns around USD/CAD and CAD/JPY at the moment. The US Dollar is staring down a Friday inflation print in which CPI is expected to print at an annualized 6.7%. And this leads into a Fed meeting the next week where the FOMC is expected to make a more-hawkish pivot in response to that inflation and the ‘maximum employment’ that showed in last Friday’s NFP report.

In the Yen, U.S. rates have popped higher, with the 10 year back above 1.5%. As looked at around the Q4 open, higher rates can spell more Yen weakness, as the Japanese currency is a favorite for carry trades and with higher US rates, USD/JPY can become more attractive from that vantage point, with a similar theme in CAD/JPY, such as we’ve seen over the past few trading days.

I remain bearish CAD against the US Dollar, mainly in deference to the USD bullish trend. The US Dollar had become overbought from a number of vantage points but this recent injection of CAD strength allowed for a 38.2% pullback to that move.

Resistance remains at a key area, around the same 1.2850 level that I highlighted last week, just before the pullback started. And support has so far shown in a key zone that I pointed out then, spanning from around 1.2622-1.2671. That zone is also accompanied by the 38.2% Fibonacci retracement of the recent bullish move. 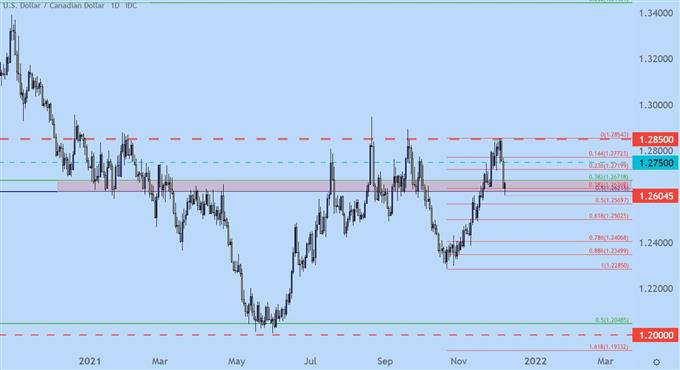 CAD/JPY, at this point, remains an item of interest for potential CAD-strength scenarios. The pair is in the process of testing a really big spot on the chart, as illustrated yesterday, and there’s a number of resistance mechanisms at play.

The 90 handle is a major psychological level and just a little higher on the chart is a Fibonacci level at 90.24. This zone had functioned as support in the middle of November, there’s also a case of support-turned-resistance taking place here.

So, this zone would need to be left behind first before CAD-strength scenarios can take over again, but given the push from yields and, in-turn, the Japanese Yen, that potential remains. The key for this theme to remain in order is a hold above prior resistance, taken from around the 89.27 level on the chart.

Of note, from shorter-time frames, divergent RSI is signaling the possibility of a deeper push, so that support may be in play sooner rather than later.

Fundamentally, continued strength in Oil combined with a continued recovery in US rates ahead of CPI on Friday and the Fed next Wednesday can produce an accommodative backdrop for bulls, provided that technical support holds up. 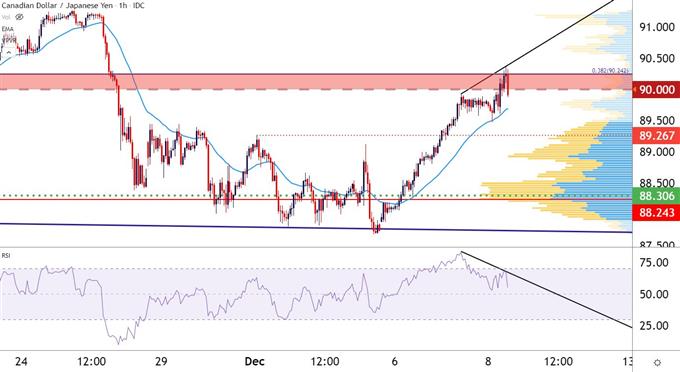