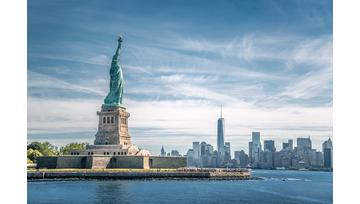 - This week produces a series of pertinent drivers, with the highlights being U.K. inflation tomorrow and Central Bank meetings out of Japan and Europe on Thursday.

- The calendar is exceedingly quiet for USD this week with no high-impact data announcements and no Fed-speak. As of Saturday, the Fed is in the ‘quiet period’ ahead of their next rate decision on July 25/26.

Ever since the Brexit referendum, there’s been the fear that the ‘sharp repricing’ in the value of the British Pound would lead to unsavory levels of inflation. We were warned of as much by BoE Governor Mark Carney before the referendum ever happened; that a decision by voters to leave the EU would drive the value of Sterling lower, which would lead to higher levels of inflation that, eventually, could force the Bank of England’s hand away from loose policy options.

In the wake of the referendum, the BoE was rather clear: the brute uncertainty produced by Brexit was not to be taken lightly, and within months of the vote the Bank of England had already launched a ‘bazooka’ of stimulus designed to stimulate the economy through the uncertainty of negotiations. This dovish posture from the BoE functioned like a wet blanket to GBP price action, as each move-higher in the currency was promptly sold as an uber-dovish BoE was nowhere near ready to relent from their accommodative stance. This eventually led to the ‘flash crash’ as a dearth of demand for the British Pound allowed the currency to drop hundreds of pips in a matter of moments. 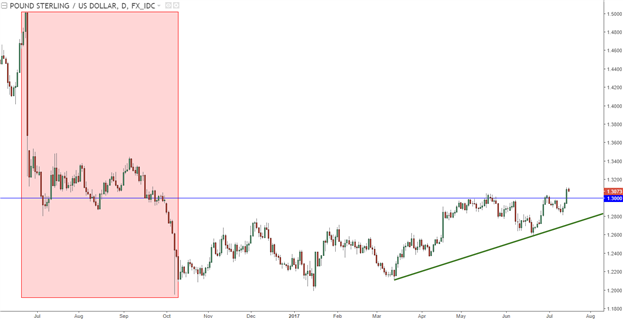 But as we came into the New Year, and as no dizzying recession had yet engulfed the U.K. economy; we started to see the initial signs of capitulation within the BoE. The Chief Economist for the bank, Mr. Andy Haldane, held an interesting speech around the beginning of the year in which he claimed that the economics profession had their ‘Michael Fish moment’ around the Financial Collapse and again around Brexit. This seemingly highlights that while Brexit did produce considerable uncertainty, the brutal slowdown that the BoE thought would happen simply hadn’t materialized. What had started to show up, and what continued to grow was inflation; and not necessarily the type of inflation that Central Banks had spent the past few years trying to muster with growth in wages.

That inflation continued to pick up until we saw a 2.9% print for the month of May. Then at the BoE rate decision just a couple of days later, we saw three MPC members vote for a rate hike, which would be the most votes for a rate hike at the bank since 2011. This gave the initial appearance that a shift was taking place within the BoE that could, eventually, lead to a rate hike, as inflation continues to drive-higher in response to the ‘sharp repricing’ in the value of the British Pound around the Brexit referendum.

This theme caught considerable attention towards the end of June when BoE Governor Mark Carney signaled that rate hikes may be ahead. Mr. Carney ceded that removal of monetary stimulus may be necessary and that the BoE may need to tighten monetary policy, and at this point the British Pound went into full breakout mode as the pair broke above the vaulted 1.3000 psychological level.

After putting in a 50% retracement of that move in the first two weeks of July, bulls returned to bid the pair-higher. Current resistance is showing around the 1.3100-handle as we walk into U.K. inflation figures tomorrow. Last month saw inflation come-in at 2.9% with Core Inflation printing at 2.6%. Should inflation come-in around that 3%-figure yet again, we will likely see bullish continuation in GBP as bulls factor in a higher-probability of tighter policy in the not-too-distant future.

GBP/USD four-hour: Bullish Breakout of Bull Flag after 50% retrace of prior trend 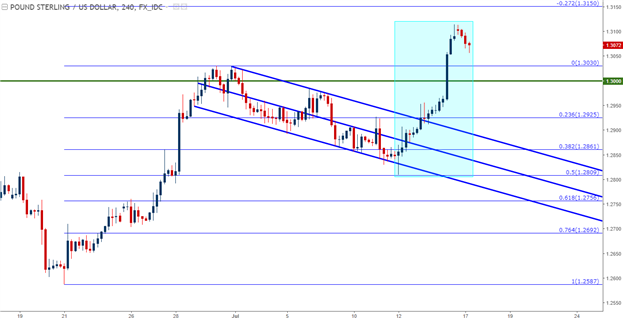 BoJ on Thursday – Where’s the Inflation?

A little later in the week we get a rate decision out of the Bank of Japan. As has become usual, no real moves are expected here as the driver will likely be in the details. And on those details, the primary matter of pertinence seems to be just how dovish the BoJ is given the continued lack of inflationary pressure in Japan despite the rather encouraging growth that’s started to show. Japan’s economy expanded at an annualized 1% in the first quarter as driven by exports and household spending; and business confidence hit a three-year high in June.

As we discussed in January and then again in May, the Bank of Japan is encouraged by the continued growth that’s shown of recent. But more concerning is the lack of accompanying inflation, and this has raised the question of whether or not the BoJ might cut their inflation forecasts for this year as price pressures continue to lag. In a speech last week, BoJ Governor Haruhiko Kuroda echoed his familiarly dovish calls, and this added another shot of weakness to the Japanese Yen. But his term is up in less than a year, and his ‘whatever it takes’ strategy to drive a return to 2% inflation has seemingly failed, at least so far, as inflation remains evasive in the Japanese economy.

The Japanese Yen is in an extremely interesting technical position as we near this Bank of Japan rate decision. After the bullish burst that began in mid-June drove the pair up to fresh four-month highs, digestion has started to show as USD/JPY has put-in a 38.2% retracement of those recent gains. 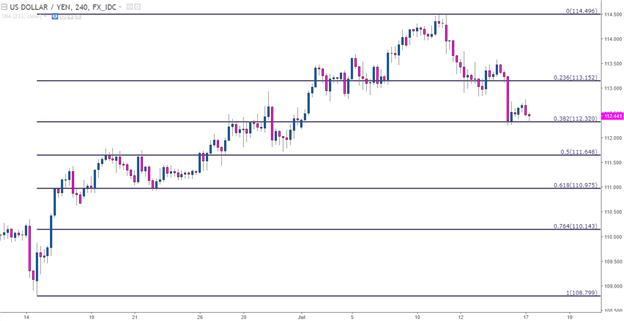 This has brought price action to a very interesting longer-term zone of support/resistance, as the area between 111.61-112.40 contains multiple Fibonacci retracements that have produced a plethora of inflections, on both sides of the move, over the past five-and-a-half months. 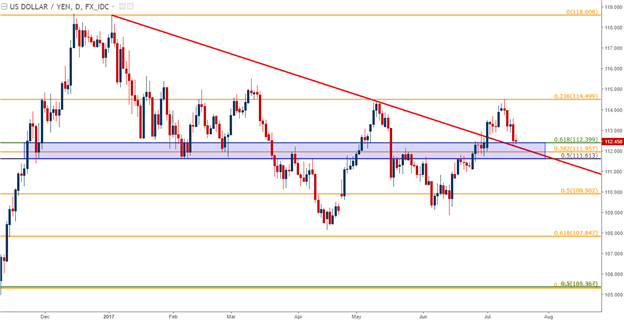 In what’s become somewhat of a continued saga, the story of Dollar weakness has continued for another week. Last week’s commentary from Fed Chair Janet Yellen had helped the Dollar to find a bit of support at prior ten-month lows; but another set of bad data prints on Friday helped prices eviscerate that support as prices in ‘DXY’ made a strong drive towards the 95-level.

This week is rather scant for U.S. drivers, as there are no high-impact U.S. data prints on the calendar, and as of Saturday – the Federal Reserve has entered the ‘quiet period’ ahead of their next rate decision on July 25th/26th. Given the importance of Central Bank meetings in Japan and Europe (both on Thursday), we will probably see the Dollar price in-line with larger macro themes throughout this week. As in, if the ECB can elicit any lasting weakness in the Euro, as they’ve apparently tried to do at the past two ECB meetings, then this could provide some temporary lift for the Greenback. 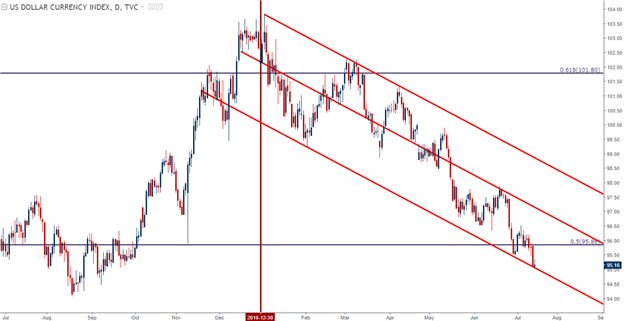