BOE: Economic Forecasting in a World ’Tipped Upside Down’ 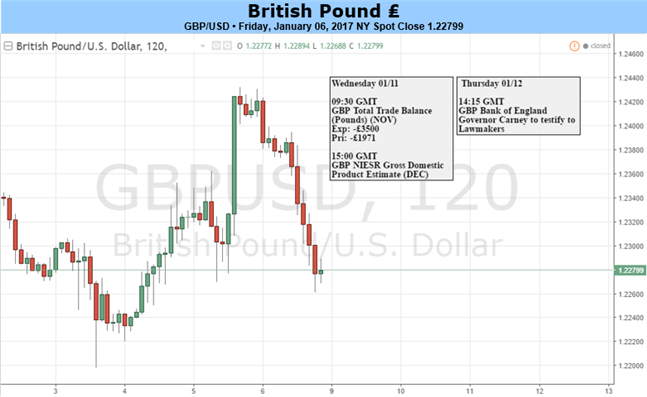 The Bank of England took a bold stance in front of last year’s Brexit referendum. Traditionally Central Banks stay politically-neutral, much as Janet Yellen did during this year’s acrimonious U.S. Presidential Election. But ahead of Brexit, BoE Governor Mark Carney came out aggressively against the prospect of a Brexit, saying that voters choosing to leave the European Union could create a quagmire of a situation for the BoE as a Brexit would likely entail slower growth, a weaker Sterling, creating higher levels of inflation and unemployment.

Shortly after Brexit actually happened, Mark Carney rushed to assure that the BoE would be there to support markets with ample liquidity and dovish policy. In August, the Bank of England announced a ‘bazooka’ of stimulus that could buy a significant chunk of the British Corporate Bond market, and this sent the Sterling far below support levels that had come into-play during Brexit. And then in early October when news of a potential ‘Hard Brexit’ began to become more prominent, the British Pound went in full-blowout mode accented by the ‘flash crash’ on October 6th.

All of this served to fulfill at least one part of Mr. Carney’s warning. The ‘sharp repricing’ in the British Pound most certainly took place around Brexit; but it was the Bank of England’s response just after the referendum that really seemed to aggravate matters. The BoE’s numerous pledges for dovish policy moves drove the Pound to fresh 30-year lows and this is something that we’re still dealing with (and will deal with for the foreseeable future) as inflationary pressures appear to be on the rise in response to the ‘sharp repricing’ that we’ve seen in the British Pound.

At November’s Super Thursday batch of announcements, the Bank of England spoke to this fact when they raised inflation expectations; coupled with the implication that we may be nearing the end of the BoE’s dovish policy drive. November saw the British Pound as one of the strongest currencies in the world, even stronger than a U.S. Dollar that was in the midst of historically-strong move after the U.S. Presidential Election. And with the books now closed on 2016, it appears as though the U.K. was one of the fastest growing developed economies for last year.

This is significantly divorced from the picture that the BoE painted when they rolled out their gargantuan bond buying program. And for many, this created an element of confusion that could make it difficult to rely on BoE forecasts in the future.

This week, the Bank of England’s Chief Economist, Mr. Andy Haldane issued a mea culpa around the bank’s forecasts and expectations around Brexit, saying ‘it’s a fair cop to say the profession is to some degree in crisis.’ Mr. Haldane said that the economics profession had their ‘Michael Fish’ moment around the 2008 collapse and again around Brexit, highlighting their inability to see ‘big moves’ ahead with their models. (Michael Fish is in reference to U.K. weather forecaster, Michael Fish, soundly dismissing the possibility of a hurricane in 1987 that ended up decimating the southern coast of England.)

Mr. Haldane said that data post-referendum has been surprisingly strong for the BoE. But perhaps the most noteworthy line from Mr. Haldane’s speech was the following: “I’m not someone who would say that all that’s been done in the past is terrible. It’s just that the models we had were rather narrow and fragile. The problem came when the world was tipped upside down and those models were ill-equipped to making sense of behaviors that were deeply irrational.’

So – not only were the Bank of England’s forecasts ‘wrong,’ but it was because the decision-making processes that were being employed were ‘ill-equipped.’ Perhaps a bigger question is whether or not the world is still ‘tipped upside down?’ Did the models stop working temporarily; or is this a tectonic type of shift that disallows the models that were employed during the 87 S&L crash or the 2000 Tech bust or the 2008 Housing Collapse to just, all of the sudden, stop working?

In the near-term, traders are going to want to exercise a bit more self-sufficiency when it comes to trying to forecast anything around the U.K. economy. We have to wait until February to get updated inflation forecasts from the Bank of England, and the prospect for continued gains in inflation are still very much present. It appears as though the BoE is near the end of their dovish policy drive, and given the increasingly-higher potential for even stronger rates of long-term inflation while the British Pound sits very near 30-year lows, and this could create considerable strength in the British Pound at some point in 2017.

Next week presents a single day with a batch of data points for the British Pound, and that’s on Wednesday when we get NIESR GDP, November trade balance figures and industrial production numbers. Any evidence of additional strength may serve to only make those prior forecasts from the BoE look ‘more wrong’ while bringing additional top-side to the British Pound.

The forecast for next week on the British Pound will be set to bullish.