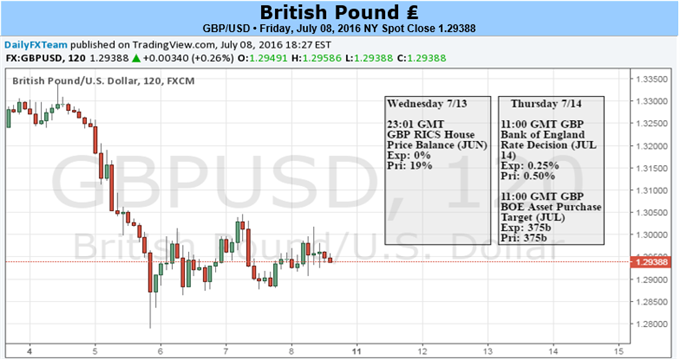 While Brexit Makes the Waves, Carney Drives the Pound

The British Pound continues to get smashed in the post-Brexit environment, with this week seeing yet another +30-year low print as price action drove below the psychological 1.3000 level against the US Dollar. Realistically, it’s impossible to tell how deep this trend may run given the brutal amount of uncertainty around Brexit. We discussed this in the Quarterly forecast for the British Pound; as even the questions around the UK’s divorce from the EU (how exactly this may take place) have their own questions (when will discussions even begin, who will lead these discussions, etc.).

The one matter that should be apparent at this point is that the Bank of England will not be caught sleeping behind the wheel. As a matter of fact, one can make that case that post-Brexit price action has been more impacted by the BOE responding to risks around Brexit rather than the brutal uncertainty around Brexit itself. In the first three trading days of last week, the Sterling found support and moved higher by over 400 pips to find resistance at the lows set around the Financial Collapse at 1.3500. At this point, it had appeared likely that we’d see the Pound continue to recover a bit more before making any deeper trend-side movements lower. But this is right around the time that Mr. Mark Carney called an impromptu press conference to assure markets that the Bank of England would keep a watchful eye over the situation, with a nod towards a potential rate cut coming at some point this summer.

This brought weakness right back into the British Pound as markets began to price-in a rate cut from the Bank of England. And this rate cut really wasn’t out of the blue; leading up to the Brexit referendum, we had multiple members of the Bank of England talk up the prospect of a rate cut even in the event of a ‘remain’ vote winning-out; proffering that the recent slowdown in U.K. data may not have been entirely related to Brexit. And should voters have elected to ‘remain,’ the Bank of England would likely be looking at instituting more dovish policy to offset the recent slowdown in growth an inflation numbers.

But, as you probably well know, the remain votes did not win-out and now the threat of the unknown around Brexit is coupled with the recent slowdown in U.K. data; and for the Bank of England this can produce a very uncomfortable position for setting policy moving forward. As Mark Carney had warned during the last Super Thursday batch of announcements, Brexit could entail slower growth, higher unemployment, higher inflation and a ‘sharp re-pricing’ in the value of the British Pound. This puts the BOE in the awkward position of having to choose to mold policy towards either stoking growth and employment at the behest of inflation and the value of the Sterling; or choosing to hike rates in the face of a dizzying set of risks to temper inflationary pressures at the cost of even more growth and even higher levels of unemployment.

While both of the above scenarios are bad, the early actions of the Bank allude to the direction that they’re likely looking to embark upon. Given that inflation remains subdued and the fact that real estate prices have moved lower, the down-side of rate cuts is a bit more mitigated than it was during that last Super Thursday, at least at this point. And it appears that the BOE has chosen their path for policy moving forward by transmitting to markets multiple times in the two weeks following Brexit that the bank is looking to cut rates this summer; the big question now is when they might begin to cut rates.

The next BOE meeting is Thursday, July 14th and while it would be a bit unusual for the Bank of England to cut rates at a meeting that does not include inflation forecasts, it’s rather obvious that we’re in exceptional circumstances. If the BOE and Mark Carney make a move next week, this shows that they’re even more worried about fallout around Brexit than they’ve appeared to be so far. We are still just two weeks from the Brexit referendum, so it’s unlikely that much of the data that the bank will be working with will indicate very much about the post-Brexit environment for the U.K. economy.

In August, the Bank of England will deliver forecasts and projections along with their rate decision and this could be a likely time to get a pulse from the bank for monetary policy moving forward. If the BOE doesn’t cut next week, we will likely see a cut at this meeting in August. And even if we do get a rate cut next week, should weakness persist, we may see a second rate cut to zero at this August meeting. There has even been increasing odds of negative rates showing up at the BOE’s rate decision in December. And while this may be a far distance from where we’re at today, the one thing that should be clear is that the BOE isn’t taking this lightly. In the near-term, this is a negative for the British Pound as it means that we likely haven’t seen the end of that ‘sharp re-pricing’ that Mr. Carney had warned us about two months ago, and the bank likely isn’t done making moves in an attempt to proactively off-set the risks emanating from Brexit.

The forecast on the British Pound will remain at bearish.