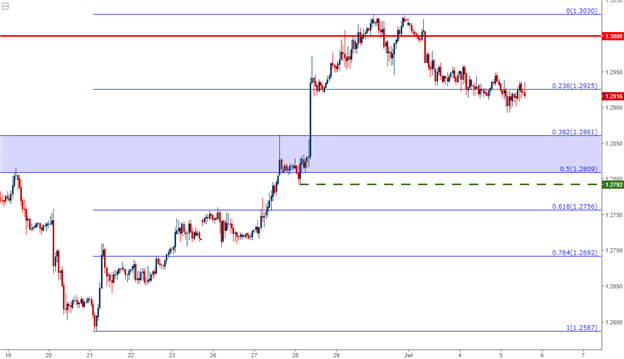 - GBP/USD rallied over the vaulted 1.3000 psychological figure, albeit temporarily, after Mark Carney warned of potential rate hikes, signaling a shift within the BoE as inflation continues to run-higher in the U.K.

Last week, we looked at what appeared to be the initial makings of bullish price action in GBP/USD. And if this comes at somewhat of a surprise, that is understandable, as the British Pound has been ruthlessly offered-lower since last year’s Brexit referendum. Around the referendum, the Bank of England took on an extremely dovish approach, worried that the unprecedented risks around the divorce from the EU by the U.K. would roil the British economy. This hasn’t happened yet, but what has taken place is rising inflation after the ‘sharp repricing’ in the British Pound after Brexit was followed by this extreme-dovish stance from the Bank of England.

In June, we saw the Bank of England vote 5-3 to hold rates flat, but the fact that three MPC members dissented in favor of a rate hike gave the idea that the BoE may be nearing capitulation on their post-Brexit dovish stance. This shift is a clear response to the 2.9% inflation print from May that was released just ahead of that rate decision, and then last week saw the head of the BoE, Mr. Mark Carney, make similar remarks, warning that rate hikes may be on the horizon for the U.K.

This has the makings of bullish continuation in the British Pound as the BoE appears to be in the early stages of a more-hawkish shift, and the technical picture echoes this potential for an extension of bullish price action after last week’s burst-higher drove prices above the 1.3000 psychological level. On the hourly chart below, we’ve applied a Fibonacci retracement in the effort of finding where support may show-up for bullish continuation strategies. The ~50 pip area that runs from the 50% retracement at 1.2809 to the 38.2% retracement at 1.2861 is particularly interesting for such an approach. Support in or around this region can open the door for topside entries with stops applied below the prior swing-low at 1.2792.