GBP Pops After BoE Votes 5-3: But Does This Move Have Staying Power?

- The British Pound is running-higher on the morning as the bank has voted 5-3 in favor of keeping rates flat, as Ms. Kristin Forbes was joined by Michael Saunders and Ian McCafferty in voting for a rate hike.

- After that quick pop-higher, sellers came-in to offer GBP/USD back below the key area of 1.2750, further highlighting this level as a key area to watch in assigning directional bias to GBP/USD strategies.

In a surprising turnout at this morning’s Bank of England rate decision, the bank voted 5-3 in favor of keeping rates flat. The surprising element is the fact that two additional members from the MPC dissented, as Michael Saunders and Ian McCafferty joined Kristin Forbes in voting for a rate hike at this morning’s meeting. This is likely at least somewhat attributed to the 2.9% inflation print that we saw earlier in the week, and in-turn the British Pound is gaining ground as traders begin to factor in higher rate expectations.

The bigger question is whether this trend has continuation power: Ms. Forbes, who cast the first post-Brexit vote for a rate hike at the bank’s meeting in March, is leaving the Monetary Policy Committee at the end of this month. So, one of those three votes will no longer be voting. And the Bank of England has been extremely dovish in the wake of Brexit under the presumption that longer-term risks needed to be met with a passive stance towards inflation; and this was echoed by BoE Governor Mark Carney as recently as last month at ‘Super Thursday’.

This passive stance has been rather clear from the BoE since even before the Brexit referendum. Ahead of the referendum, Mark Carney warned that Brexit would entail a ‘sharp repricing’ in the value of the British Pound, and that could lead to higher levels of inflation. As U.K. voters elected to split from the EU, the value of GBP dropped dramatically; but it was the ensuing campaign from the BoE in the months after the referendum that really drove the currency-lower, and of recent, we’ve started to see the corresponding move in higher prices.

This theme of GBP-weakness on a persistently dovish BoE lasted until Theresa May announced early general elections in mid-April of this year; at which point the Pound popped-higher as traders unwound short positions. Strength remained in GBP/USD until polls began to indicate that Tories may not have the easy walk in the park towards gaining a super majority that many had thought when Ms. May initially made that announcement; and after last week’s election, Cable dropped back-down below the 1.2750 psychological level. 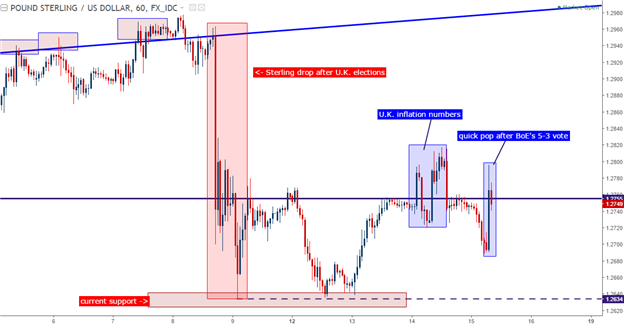 On the daily chart below, we can get a better idea of near-term support and resistance dynamics currently taking place in Cable. We saw three tests of support around 1.2634 after last week’s U.K. elections, and, from the daily chart, we can see how sellers have been responding to prices above 1.2750, just as we’ve seen this morning as sellers have used this quick pop to sell GBP. 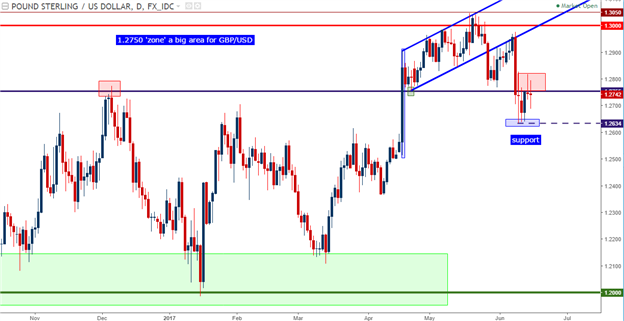 Does This Move Have Staying Power?

From where we’re at right now, probably not. The Bank of England has been extremely dovish in the wake of Brexit, and while we are seeing an apparent shift emerge, the fact that one of the more vociferous forces looking for higher rates, Ms. Kristin Forbes, is leaving the MPC at the end of the month means that the bank could easily be more dovish at their next rate decision.

On the data front: While inflation continues running-higher, along with much of the rest of the world, wage growth remains weak. So while prices are going higher, consumers aren’t receiving commiserate pay bumps to offset those higher prices, and this was somewhat of the driver for the BoE’s previously ultra-dovish stance. And now that we have even more uncertainty around the Brexit referendum given last week’s election, there are even more reasons for the bank to take a passive approach towards inflationary forces in the near-term.

But as always – let price lead the way. The fact that sellers are and have been responding to resistance at these lower levels may be telling; because if this were a legitimate trend change as the BoE shifts from towards a ‘less dovish’ stance, then buyers would likely not have abated from the move so quickly allowing price action to fall back-below 1.2750.

On the chart below, we’ve identified two areas to watch in order for traders to assign a directional bias corresponding with price action. The quick swing-high at 1.2829 can help to set a demarcation level with which bullish approaches could be warranted. Conversely, another test of support at 1.2634 can open the door for breakout-style entries, or momentum-based strategies once price action breeches support. 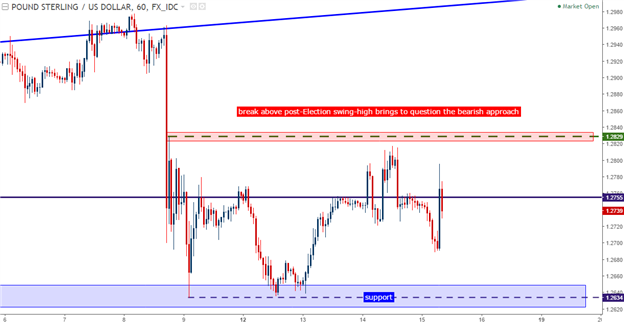