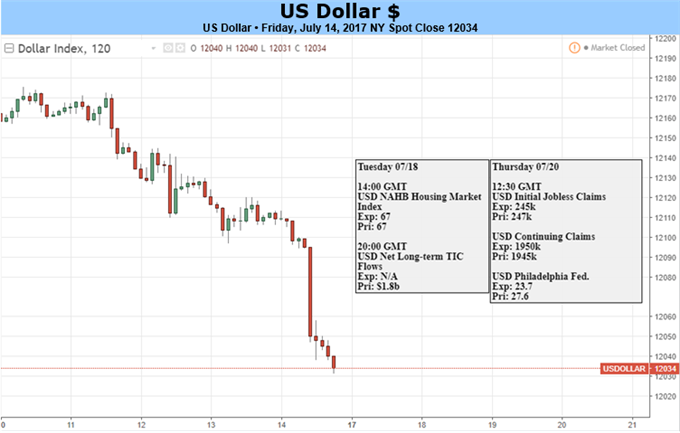 This was a big week for the Greenback as the two biggest items on the calendar were USD-related. As has become the norm of recent, a relatively hawkish Federal Reserve was unable to inspire any lasting strength in the currency while U.S. data continued to disappoint. Markets’ attention has been focused squarely on economic prints out of the U.S. economy of late, and as we discussed two weeks ago, this has done Dollar bulls very few favors as data continues to print below expectations.

On Wednesday and Thursday, Fed Chair Janet Yellen testified in front of Congress as part of the bank’s twice-annual Humphrey-Hawkins testimony. Matters appeared to kick-off even before Chair Yellen’s opening statement was read at 10:00 AM on Wednesday, as the Monetary Policy Report to Congress that was released at 8:30 AM seemed to catch trader’s attention as the final paragraph of the report reiterated the ‘Fed Put’ that has helped to keep equity prices elevated. The ‘Fed Put’ is the idea that the Federal Reserve will loosen monetary policy in response to equity market declines, very similar to the ‘Greenspan put’ from 1987 in response to the S&L crash, or the ‘Bernanke put’ in response to the 2007-2008 Financial Collapse. The final paragraph in Wednesday’s report essentially said that the Fed could quickly go back to QE if necessary; effectively nullifying the fear that the bank has divorced their monetary policy stance from near-term equity market performance.

The response in U.S. equities was robust, as bids drove prices back towards fresh all-time highs in both the Dow and the S&P 500. The move in the U.S. Dollar, however, was rather weak as we had a simple test of ten-month lows without any significant continuation to speak of. That, however, started to show-up on Friday morning when we got even more disappointing U.S. data. Inflation came-in flat versus an expected .2% gain, and retail sales fell by .2% against the expectation for a .1% gain. This inspired another wave of selling in the Dollar as prices, again, broke down to fresh lows.

This appears to be a significant pain point for the Greenback at the moment. As we discussed two weeks ago, U.S. data has disappointed for much of 2017, and that’s created questions behind just how aggressively the Fed might be able to hike. As we walked into the year, expectations were flying-higher as the Dollar drove up to fresh 14-year highs, but since then – those higher expectations have only led to bigger disappointment as actual economic performance has simply been unable to keep pace. Meanwhile, growth and inflation has started to show with more consistency in Europe and the U.K., and this has led to even more deductive weakness in the Greenback as traders shift rate hike bets in the Euro and British Pound.

Next week brings no high-impact data out of the United States, and on Saturday the Federal Reserve enters the ‘quiet period’ before their next rate decision on July 26th. The bigger market-wide events are rate decisions out of Europe and Japan along with an updated inflation print out of the U.K.; and this will likely be where the bulk of market participants’ attention remains. From what we’ve seen of recent – both the ECB and the BoJ have made efforts to talk-down their currencies and, if they’re effective next week, this could bring a modicum of strength to the U.S. Dollar that would essentially amount to a retracement of the ‘bigger picture’ bearish trend.

The forecast for USD will be set to neutral for the week ahead.