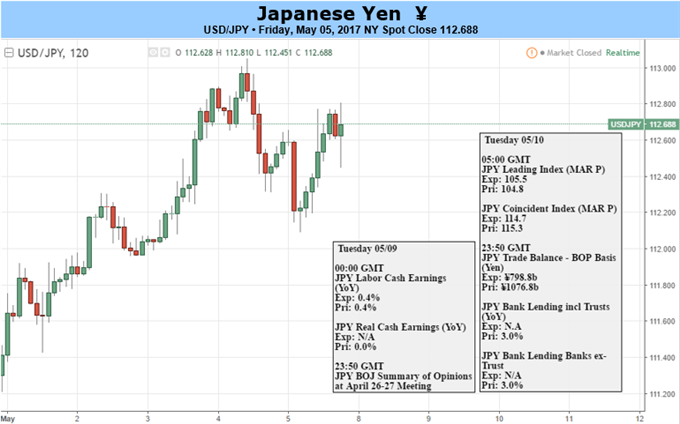 BoJ Optimistic but Inflation Still Subdued: Taper Not Yet a Topic of Concern

Yen weakness was a pervasive theme across FX markets this week, as the currency dropped every day against the Euro and four out of five days against both the British Pound and the U.S. Dollar. Kicking off the week and driving that Yen weakness was the release of the Bank of Japan meeting minutes from their March rate decision that was originally held on March 15-16. The minutes indicated that the bank still feels optimistic about the Japanese economy eventually meeting their 2% inflation target; but continued Quantitative Easing will be a necessary component of the bank’s strategy if they are to hit that goal. This furthered the impact of last week’s rate decision as it allayed an even-more dovish BoJ that’s in absolutely no hurry to taper or even to begin discussing tapering QE-purchases or nudging their target for 10-year JGB’s higher.

At that more recent rate decision in April, the BoJ modified some of their key forecasts; raising GDP growth forecasts slightly (to 1.6% v/s prior 1.5% for 2017-2018 fiscal year) while also nudging down their expectation for Core CPI (to 1.4% v/s prior 1.5%). The fact that they’re continuing to nudge CPI expectations-lower highlights that while Japanese Central Bankers are positive and optimistic about recent up-ticks in the Japanese economy, inflation is still lagging and there is little expediency for the BoJ to leave their stimulus efforts behind.

In a wide-ranging CNBC interview on Friday, BoJ Governor, Haruhiko Kuroda spoke on a number of topics, including economic expectations. Governor Kuroda full expects both wage and price gains to begin to accelerate, with the output gap continuing to shrink until it eventually goes positive; and the labor market would continue to tighten until wages rise to attain the 2% inflation target ‘around’ fiscal year, 2018.

There is a discernable pattern in the above three events, and if this all sounds familiar, it is. In January, we asked how much confidence does the Bank of Japan have in the Trump Trade… and our analysis then is still applicable today: While the BoJ is likely encouraged by some of the recent economic improvements in the Japanese economy, the perilous path that the Bank took in the year prior has likely kept the BoJ in a risk-averse mode in which the bank won’t move off from their stimulus program until they’re fairly certain that 2% inflation is around-the-corner. Governor Kuroda’s term ends in the first half of 2018, and it’s very unlikely that the BoJ is looking at 2% inflation before then.

Next week brings no high-impact Japanese economic announcements. Geo-political risk can be a concern to the continuation of Yen-weakness, as a pick-up in risk aversion around French elections or U.S. politics could create temporary unwind of carry trades using the Yen as a funding currency. But outside of those risks or a larger overall market correction, the Japanese Yen could continue to weaken as the BoJ is one of the more dovish of the major Central Banks at the moment.

For next week the forecast for the Japanese Yen will be held as bearish.