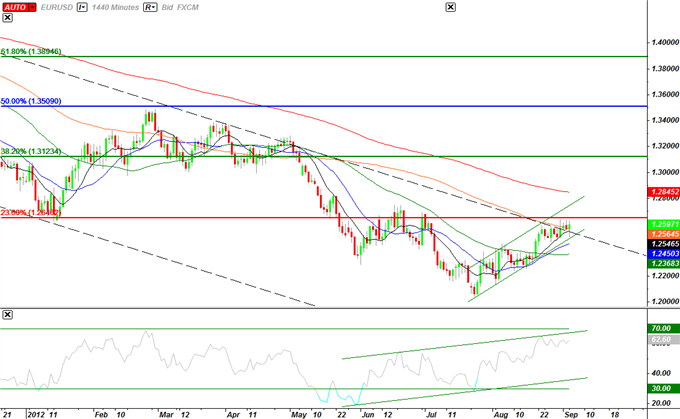 Although the European Central Bank is widely expected to keep the benchmark interest rate at 1.00%, President Mario Draghi may push through additional non-standard measures as the debt crisis continues to drag on the real economy. Indeed, there’s reports that the European Central Bank will introduce a sterilized, unlimited bond purchasing program to stem the heightening risk for contagion, but we may see the Governing Council refrain from capping bond yields as they look to target short-term maturities. However, the rate decision may fail to shore up investor confidence as there appears to be a growing rift within the ECB, and we may see President Mario Draghi attempt to buy more time as the non-standard comes under increased scrutiny.

Beyond the fundamentals, speculation surrounding the asset-purchase program may have a larger impact on the EURUSD as ECB President Mari Draghi pledges to take the appropriate steps to save the monetary union, but we will also be closely watching the central bank’s fundamental assessment as the region faces a deepening recession. Indeed, the central bank may show a greater willingness to carry out its easing cycle throughout the remainder of the year amid the slowdown in production paired with the ongoing weakness in the labor market, but the recent pickup in price growth may spark a less-dovish statement as the ECB maintains its one and only mandate to ensure price stability.

Although we’re seeing the EURUSD threaten the downward trend carried over from 2011, the pair continues to find resistance around the 23.6% Fibonacci retracement from the 2009 high to the 2010 low around 1.2640-50, and the pair may struggle to maintain to maintain the ascending channel from June should the ECB rate decision disappoint. However, if we see the Governing Council rollout a ‘bazooka’ to tackle the debt crisis, the move may fuel a relief rally in the EURUSD, and we may see the upward trending channel continue to take shape should the pair break and close above the 23.6% Fib.

Trading the ECB rate decision may not be as clear cut as some of our previous trades amid all the speculation surrounding the meeting, but the market reaction may set the stage for a long Euro trade should the central bank layout its asset purchase program in further detail. Therefore, if President Draghi announces an open-ended plan to bring down borrowing costs across the periphery countries, we will need to see a green, five-minute candle following the announcement to generate a buy entry on two-lots of EURUSD. Once these conditions are fulfilled, we will set the initial stop at the nearby swing low or a reasonable distance from the entry, and this risk will establish our first target. The second objective will be based on discretion, and we will move the stop on the second lot to breakeven one the first trade hits its mark in order to preserve our profits.

However, criticisms surrounding the non-standard measure paired with the ongoing rift within the central bank may make it increasingly difficult for President Mari Draghi to push through an unlimited bond-buying program, and the committee may refrain from releasing any additional details regarding the non-standard measure as it waits for Germany’s high court to rule on the European Stability Mechanism. As a result, if the ECB meeting fails to prop up market sentiment, we will implement the same strategy for a short euro-dollar trade as the long position laid out above, just in the opposite direction. 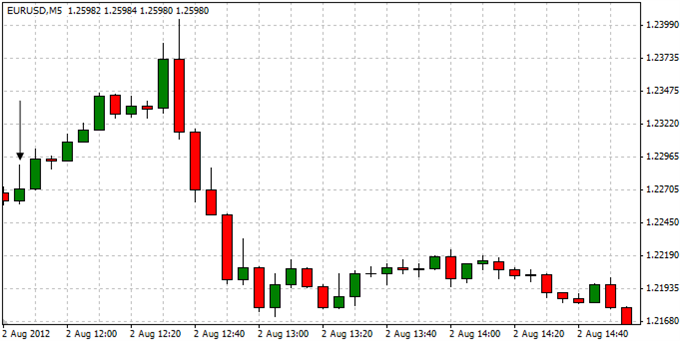 As expected, the European Central Bank kept the benchmark interest rate at 0.75% in August, but went onto say that the Governing Council may ‘undertake outright open market operations’ as the sovereign debt crisis continues to drag on the real economy. Although the ECB increased its pledge to shore up the region, the lack of an immediate response sparked a bearish reaction in the Euro, and we saw the single currency struggle to hold its ground throughout the North American trade as the pair ended the day at 1.2178.