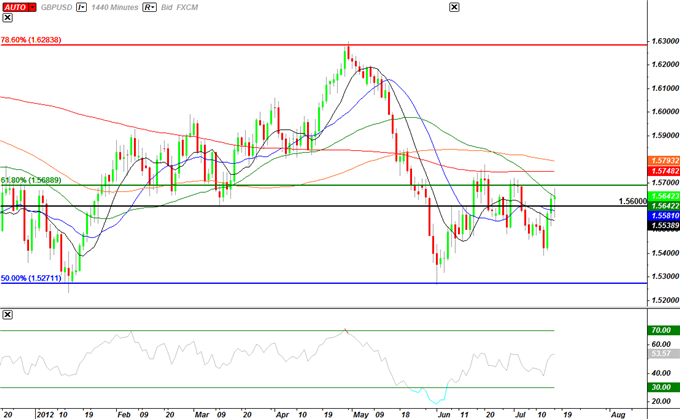 Although the Bank of England Minutes is expected to the majority voting for a GBP 50B expansion in quantitative easing, the policy statement may curb speculation for additional monetary support should the central bank endorse a wait-and-see approach for the remainder of the year. As the BoE and the U.K. Treasury take additional steps to shore up the ailing economy, the new initiative to boost private sector credit should help to encourage a stronger recovery, and we may see the BoE carry its current policy into 2013 as the central bank anticipates to see economic activity gradually gather pace in the coming months.

As the rebound in business outputs paired with the ongoing improvement in private sector consumption raises the outlook for growth, the BoE may strike a more neutral tone this time around, and the central bank may talk down speculation for more QE as policy makers look for a more robust recovery. However, we may see members of the MPC call for additional monetary stimulus as the economy remains in a technical recession, and the central bank may keep the door open to expand the balance sheet further as the committee sees a renewed risk of undershooting the 2% target for inflation.

As the GBPUSD struggles to climb back above the 61.8% Fibonacci retracement from the 2009 low to high around 1.5690-1.5700, the pair may continue to congest within the range-bound price action carried over from June, and hints for more QE may ultimately spark another test of the 50.0% Fib around 1.5270 as the fundamental outlook for the U.K. remains clouded with high uncertainty. However, if the BoE signals it will maintain its current policy over the medium-term, easing bets for more monetary support should prop up the sterling, and we may see the GBPUSD may spark another run at the 100-Day SMA (1.5793) as the central bank gradually moves away from its easing cycle.

Trading the given event risk is certainly not as clear cut as some of our previous trades, but a less dovish statement could pave the way for a long British Pound trade as it dampens the scope for additional asset purchase. Therefore, if the MPC talks down expectations for more QE, we will need to see a green, five-minute candle following the minutes to generate a buy entry on two-lots of GBPUSD. Once these conditions are fulfilled, we will set the initial stop at the nearby swing low or a reasonable distance from the entry, and this risk will establish our first target. The second objective will be based on discretion, and we will move the stop on the second lot to breakeven once the first trade hits its mark in an effort to lock-in our gains.

On the other hand, the ongoing slack within the real economy paired with the growing threat of undershooting the 2% target for inflation may bring about a very dovish statement as the central bank aims to encourage a stronger recovery. As a result, if the committee sees scope for more QE, we will implement the same strategy for a short pound-dollar trade as the long position laid above, just in reverse. 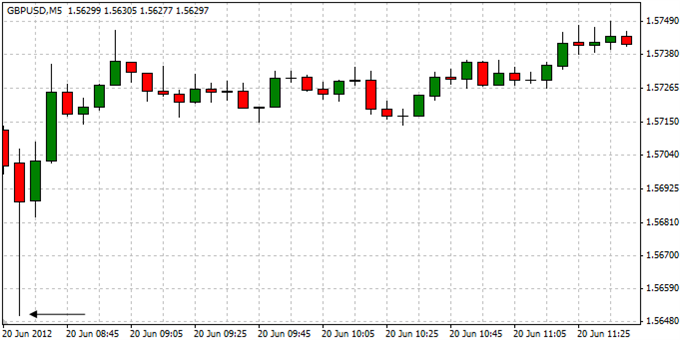 The Bank of England meeting minutes showed a 5-4 split within the MPC, with the majority voting in favor of the current policy, but the committee appears to be leaning towards additional monetary support amid the weakening outlook for growth and inflation. The GBPUSD pared the initial reaction to the statement, with the GBPUSD quickly climbing back above the 1.5700 figure, and the pound-dollar held relatively steady throughout the North American trade as the pair ended the day at 1.5714.