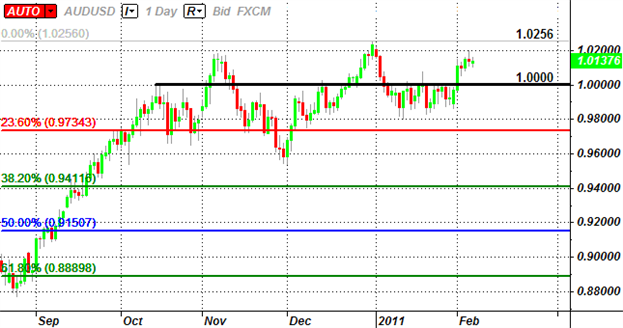 Australia’s labor market is widely expected to improve for the eleventh month in January, and the rise in employment could strengthen the near-term rally in the local currency as the economic recovery gathers pace. As the Reserve Bank of Australia raises its growth forecast and sees the economy expanding 4.25% this year, a marked expansion in payrolls could lead the central bank to tighten monetary policy further as it aims to balance the risks for growth and inflation.

Employment in Australia is forecasted to increase another 17.5K in December following the 2.3K expansion during the previous month, while the jobless rate is anticipated to hold steady at 5.0%, which is the lowest reading since January 2009. However, as the region copes with the worst flood since 1975, the natural disaster could disrupt the expansion in economic activity, and a dismal employment report could spark a reversal in the exchange rate as the recent rally in the AUD/USD fails to produce a test of 1.0200.

As the region continues to benefit from the rise in global trade, with retail spending increasing for the second consecutive month in December, businesses may lift their willingness to expand their labor force as the central bank holds a brightened outlook for the region. In turn, a marked advance in employment may lead the AUD/USD to extend the rally from the previous week, which could lead the pair to make another run at the 2010 high (1.0256).

However, as business confidence slips to a 19-month low in December, with firms facing rising energy costs, private sector employment could fail to meet market expectations and spark a selloff in the exchange rate. A dismal labor report could trigger a sharp reversal in the AUD/USD as it appears to be carving a near-term top in February, and the pair may fall back below parity as interest rate expectations falter.

Trading the given event risk favors a bullish outlook for the Australian dollar as market participants expect the rebound in employment to gather pace in December, and market reaction subsequent to the release could set the stage for a long aussie trade as growth prospects improve. Therefore, if the economy adds 17.5K jobs or more, we will need to see a green, five-minute candle following the data to generate a buy entry on two-lots of AUD/USD. Once these conditions are met, we will set the initial stop at the nearby swing low or a reasonable distance from the entry, and this risk will establish our first target. The second objective will be based on discretion, and we will move the stop on the second lot to breakeven once the first trade reaches its mark in an effort to lock-in our profits.

In contrast, businesses may scale back on employment as they cope with higher borrowing and energy costs, and a dismal labor report could spark a selloff in the exchange rate as the outlook for growth and inflation deteriorates. As a result, if payrolls increase less than 5.0K or unexpectedly contract from the previous month, we will implement the same setup for a short aussie-dollar trade as the long position mentioned above, just in reverse.

Potential Price Targets For The Event