US Dollar Consolidates Near Lowest Level in Two-Weeks

- Fed Shifts Focus to Jobs as Unemployment Stalls Above 8% – Bloomberg

- US Industrial Production Increases in Sign of Resilience – Bloomberg

- Five Things to Watch for in Bernanke Testimony – WSJ

- Pentagon Bulks Up Defenses in the Gulf – WSJ

Price action was relatively muted in the overnight session, again, as significant fundamental event risk near the start of the US cash equity session has kept traders at bay. However, we do note that the commodity currencies have perked up slightly, led by the Australian Dollar, as less dovish than expected statements from the Bank of Canada and the Reserve Bank of Australia have bolstered sentiment around high beta currencies and risk-correlated assets.

Trading ranges tightened up shortly after 07:00 EDT / 11:00 GMT, as traders repositioned themselves patiently ahead of Federal Reserve Chairman Ben Bernanke’s Semi-Annual Monetary Policy Report to Congress, which is expected to start at 10:00 EDT / 14:00 GMT today. There’s been some discussion afoot that perhaps Chairman Bernanke could give insight into the Fed’s monetary policy going forward. We think a letdown is brewing.

As per the Federal Reserve’s Minutes from the June 20 to 21 meeting, it is evident that policymakers are becoming more open to additional accommodative measures; this was obvious given the shifting rhetoric. However, it was at this meeting that the Federal Open Market Committee announced an extension of Operation Twist, the bond purchase-and-sale program initiated last September. At current time, the Federal Reserve plans to continue selling short-dated assets in favor of longer-term ones; hence, the ‘Twisting’ of its portfolio.

But by all indications, the Federal Reserve will not implement new measures before Operation Twist concludes at the end of the year, despite whatever rumors and hopes have been set forth in recent weeks. To wit: since QE1, the Fed has not run major bond purchase programs side-by-side, so there’s little reason to think that they will do so now; Chairman Bernanke has acknowledged that there have been diminishing marginal returns on QE, so it might not be appropriate to continue a failing policy; and any further efforts by the Fed essentially given free rein to fiscal authorities – the very Congress Chairman Bernanke is testifying in front of – to continue its feckless policies which raises the specter for further debt troubles.

Ahead of Chairman Bernanke’s testimony, the “QE-ON” indicators – Gold and the Japanese Yen, as alternatives to the US Dollar as safe havens – are trading lower, suggesting that no new measures or hints of easing are expected. The USDJPY is up 0.22 percent while Gold is down 0.42 percent. 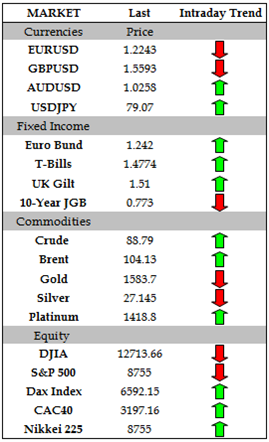 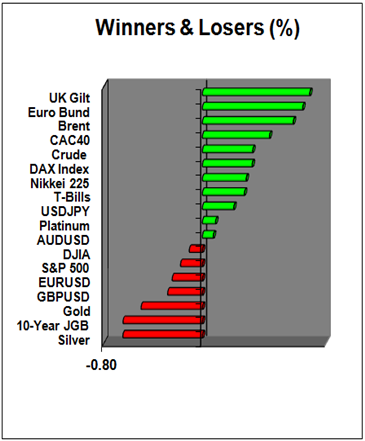 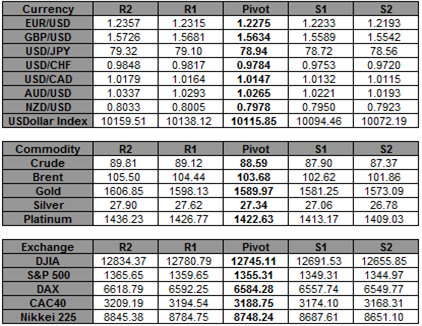