- Europe Steps Away from the Edge; Will FOMC Ease Anyway? – DailyFX

Market participants are lining up for more cheap credit from the Federal Reserve days before the Federal Open Market Committee announces its monetary policy on Wednesday. Despite mostly disappointing data from across the globe, led by a severely disappointing German ZEW Survey for June, investors have shaken off economic concerns in anticipation of an announcement of another major Fed easing package. The German ZEW Survey showed that German investor confidence plunged by the most since 1998 as the Euro-zone’s debt woes have trimmed economic growth prospects for the coming months. Regardless of the outcome of the debt crisis, the region is indeed headed for a steep recession.

Staying with Europe, the Spanish Treasury was selling shorter-term dated debt this morning, and the results were far from sanguine. €2.4 billion of 12-month bills were sold at an average rate of 5.074%, well-above the 2.985% rate paid on May 14. Similarly, the €639.3 million of 18-month debt sold at 5.107 percent, well-above the 3.302% yield paid in May. Despite these terrible figures – a clear sign that borrowing costs are rising sharply and that a bailout will be necessary soon if relief does not come – Spanish yields have improved across the spectrum: the 10-year note yield dropped by 10.4-basis points to 6.971%, while the 2-year note yield fell to 5.169%.

Largely speaking, the progress made by peripheral debt can be attributed to two hopes: first that the European Union will give leeway to Greece and work more closely for a mutually acceptable political path; and that the Federal Reserve will introduce another large quantitative easing package tomorrow. To dismiss such rumors about Greece’s bailout, it’s important to recognize and consider that Germany holds all of the bargaining chips in these bailout negotiations. In a speech yesterday, German Chancellor Angela Merkel said that there would be “no leeway” on Greece’s commitments, in sharp contrast to the hopeful comments made by an anonymous European Union official. As has been the case this entire crisis, what Germany says goes, and there’s little more to speculate on beyond that.

In regards to the Fed policy meeting tomorrow, Chairman Ben Bernanke will release the Fed’s revised economic projections as well as hold his quarterly press conference, in which the hopes for more quantitative easing in the very near-term should be dashed. Calls have been high for a QE3 package, especially among the Fed’s more dovish members such as Charles Evans (who last week stated that he would support any form of more accommodation), but it’s important to note that the Fed voting bloc has been a bit more conservative lately.

At his Congressional testimony a few weeks ago, Chairman Bernanke made it clear that the Fed would not fill the void created by the US’ irresponsible fiscal policy, and that the Fed could only do so much to achieve its dual mandate of price stability (with inflation near 2%) and maximum employment. Accordingly, we do not expect a full-blown QE3 package; but instead, we expect, at most, that the FOMC will announce an extension of Operation Twist. Similar to how markets reacted in September when Twist was announced, this could lead to a major US Dollar rally.

The commodity currencies are stronger on the day, with the Australian, Canadian, and New Zealand Dollars appreciating by 0.52 percent, 0.54 percent, and 0.59 percent against the US Dollar, respectively. The Euro has made a mid-morning surge against the US Dollar, with the EURUSD now up by 0.53 percent. The British Pound and Japanese Yen have underperformed, gaining 0.19 percent and 0.14 percent each. 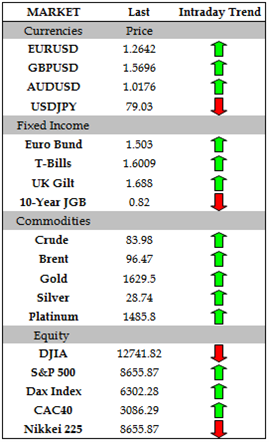 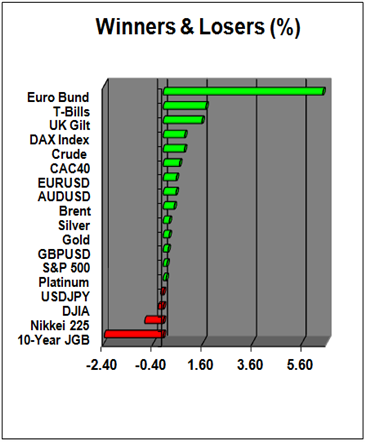 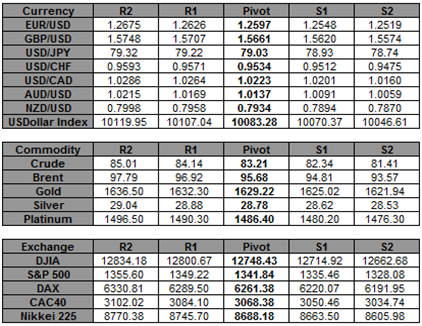