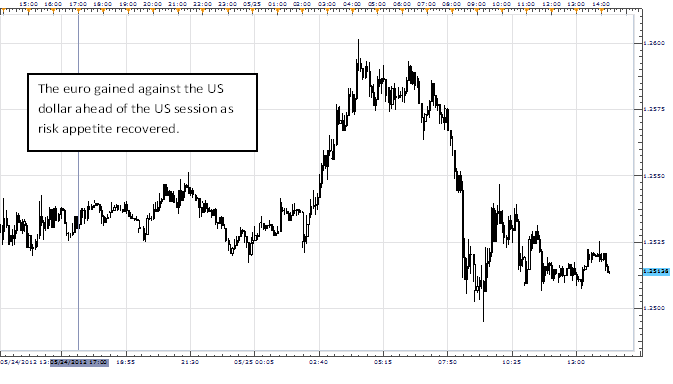 - Merkel May Be Persuaded On Euro Debt-Sharing Compromise – Bloomberg

- Bankia Set To Ask Spain For More Than $19 Billion – Reuters

The US Dollar (ticker: USDOLLAR) edged lower against its major counterparts as profit-taking sparked a corrective upswing in higher-yielding currencies and risk appetite recovery. This follows a week of risk-off trading amid concerns of a Greek exit from the euro zone and a flurry of weak manufacturing data from China and Europe. Nonetheless, the US Dollar remains well within its overall uptrend.

Europe’s debt crisis remains at the forefront of investors’ minds, as Wednesday’s EU Summit in Brussels failed to bring about any new developments. The summit ended with a deadlock on the issue on a collective debt pool as German Chancellor Angela Merkel refused to back joint euro-area bonds. Under fire from her euro zone partners, Merkel softened her stance in overnight talks, leaving open the possibility of a compromise on debt sharing.

Meanwhile, the top event in the Asian markets was the release of Japan’s report on consumer prices. Core inflation had continued to increase for the third straight month, rising 0.2 percent in April from a year ago. However, this remains a far cry from the Bank of Japan’s (BoJ) target inflation of 1 percent. Earlier this week, the Bank had refrained from adding further monetary stimulus though it reaffirmed its commitment to maintaining its accommodative monetary policy. As the nation continues to battle low inflation, we are likely to see building pressure on the BoJ to do more with its stimulus measures.

Looking ahead, we should expect a quiet weekend with some rhetoric from European leaders as they attempt to reassure markets after a bumpy week. With the U.S. market closed on Monday, we should see volatility return on Tuesday with a slew of economic data due out from Europe next week. In addition to Greek exit fears, the market will keeping a close watch on developments in the Spanish banking sector. With Bankia, Spain’s fourth largest bank, asking for a 19 billion euro bailout from the government, we could see rising speculation that Spain may be driven to seek international aid. This could lead to fresh uncertainty in the euro zone and prompt calls for further easing by the European Central Bank (ECB) in the coming weeks.