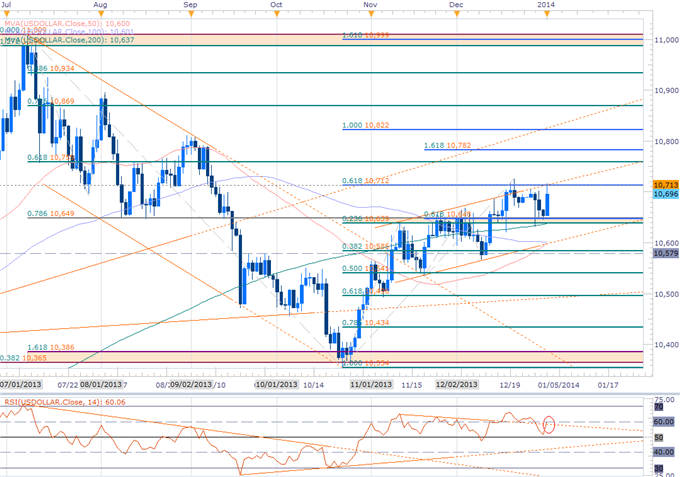 Notes: The technical outlook remains unchanged and the pullback seen into the close of December trade held at key support noted last month at 10,640/50. The near-term scalp-bias remains weighted to the topside while above this mark. Key resistance remains at the confluence of channel resistance and the 61.8% Fibonacci extension at 10,712 and a breach above this threshold puts subsequent topside resistance targets into view. A break below 10,640 puts us neutral with only a move sub-10,580 shifting our focus to the short-side as such a scenario would suggest a more substantial correction against the December highs. 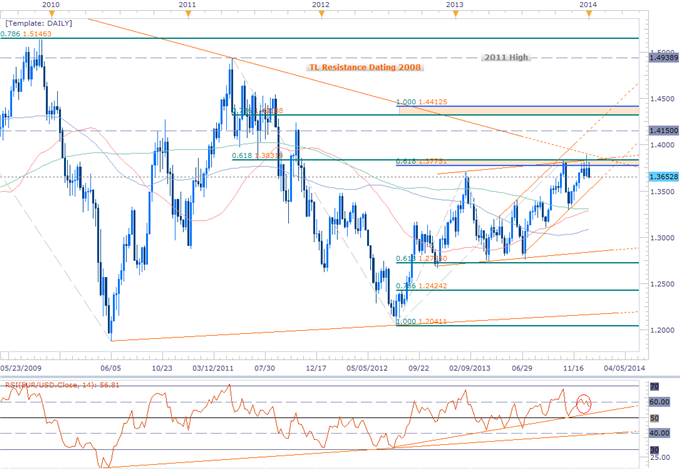 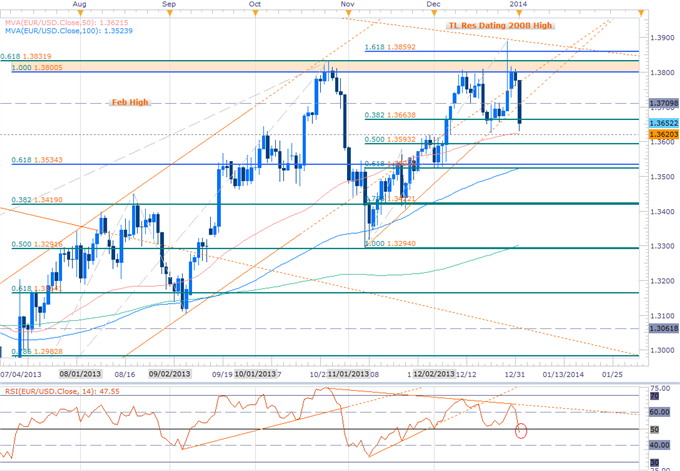 Notes: Since our last report, the EURUSD once again challenged the key 1.38-1.3830 resistance range and a breach on December 27th not only completed a 1.618% extension off the November lows, but also tagged a multi-year trendline resistance dating back to the 2008 high before pulling back sharply. On a close basis the pair has continued to respect the 1.38-handle and accordingly our bias remains unchanged from last month- bearish below this mark.

The support objectives have been amended to take into account the new high and our focus remains weighted to the downside while below 1.3830. Note that divergence has been identified in the momentum signature and a trigger break below 50 (close basis) offers further conviction on short side exposure. It is extremely important to keep in mind that we are just beginning to put in the monthly & yearly opening ranges and as such we will remain prudent on longer-term positioning with a breach above trendline resistance dating back to 2008 risking substantial losses for the greenback. 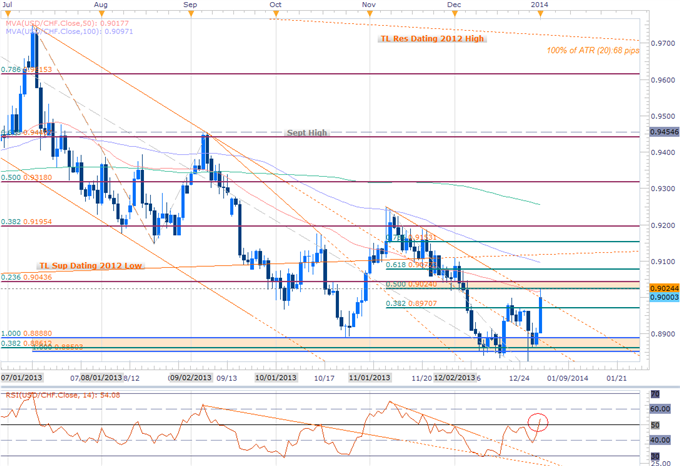 Notes: The swissy made another attempt at key support (more notably the 8850/60 range) and the subsequent rally has now achieved our initial topside objective at 9024/43. Similar to the EURUSD, the pullback & probe below key support in late December continued to respect the zone on a close basis and as such we remain constructive on the pair above 8850.

I’ve amended the topside targets to encompass the new low and as noted last week, “Bottom line: Looking to buy dips into key resistance at 9024/44 with a breach above this threshold targeting subsequent topside objectives. A break below key support at 8850 invalidates this setup with such a scenario risking further declines into support targets sub-8600.” 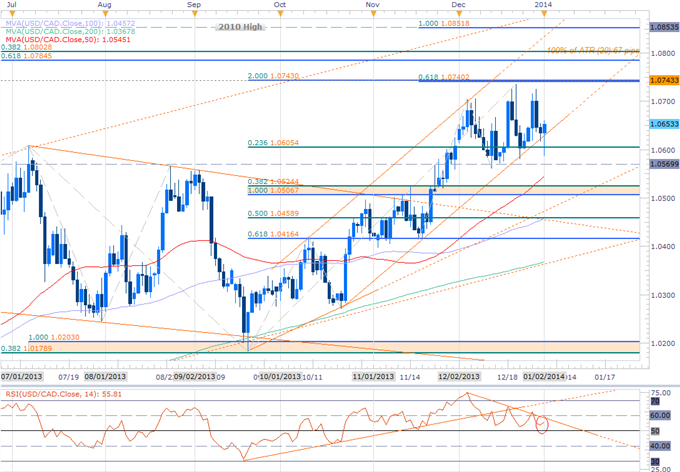 Notes: The outlook on the loonie is unchanged and remains weighted to the topside above the December lows. Note that some support targets have been amended to respect the new high made on the 20th.

“The pair has continued to trade within the confines of a broad ascending channel formation dating back to the 2012 low after breaking above a multi-year consolidation period dating back to the 2011 lows this year. It’s important to note that he USDCAD remains at the low end of the pair’s historical mean and a breach above 1.0889 next year could open up vast topside targets as we maintain an upside bias heading into 2014.

Bottom line: looking to buy dips with a break below support at 1.0570 risking a more meaningful correction lower. Only a close below 1.0460 would be a threat to our longer-term directional bias.” Notes: Last month we noted, “Our broader bearish outlook noted in the quarterly projections have achieved all three targets and while we may see a correction in late December / early January, the outlook remains heavy from both a technical and fundamentalstandpoint.” After tagging our initial support objective at $1179, the topside channel breach seen today now puts a possible correction into focus. The trigger for a continuation higher here is a break above $1233 alongside a 50-breach in daily RSI. Such a scenario further validates the near-term topside scalp bias as we look to play this correction.

“Key support rests at the yearly low which was represented by a Fibonacci confluence at $1179/80. Channel support also comes into focus in this region and may offer some support for prices in the near-term. A break below this mark offers further conviction on short exposure into subsequent support targets. Should the topside of the channel be compromised, look for a more meaningful recovery to offer more favorable short entries with only a breach above $1268/70 invalidating our broader outlook.”

Again, it is extremely important to remain prudent as we open up January / 2014 trade with the opening rages likely to offer further clarity on our medium/short-term directional biases. We’ll look to rely more heavily on price action as traders return back from holiday and volume picks up next week.

Follow these trade setups and more everyday with DailyFX on Demand.