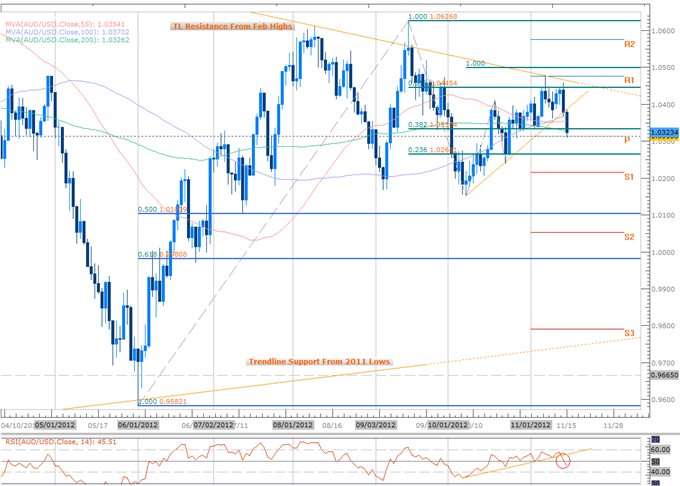 We have updated our scalp targets on our AUDUSD scalp setup taking into account recent price action in the decline off the monthly highs at 1.0480. Although our broader bias remains bearish, near-term technicals suggest we say see correction of some magnitude before heading lower.

We've continued to press the AUDUSD since the rejection at 1.0440 and as noted in Tuesday's report, we held the position into our initial objective at 1.0335 while noting that"a key break below our bottom limit at the 38.2% extension at 1.0335 risks substantial declines for the aussie with targets seen lower at the monthly pivot at 1.0313." The low of the day is currently 1.0308 (monthly pivot at 1.0312) and a near-term bullish scalp bias has been adopted into the close of trade in New York. It's important to keep in mind that the broader bias remains weighted to the downside with our topside limit now lowered to 1.0383. A close above the 1.04-handle invalidates further weakness such a scenario risking a rally back into the monthly highs. The near-term objective with a break of the lows now focuses on the 23.6% Retracement at 1.0265, and the S1 monthly pivot at 1.0215. 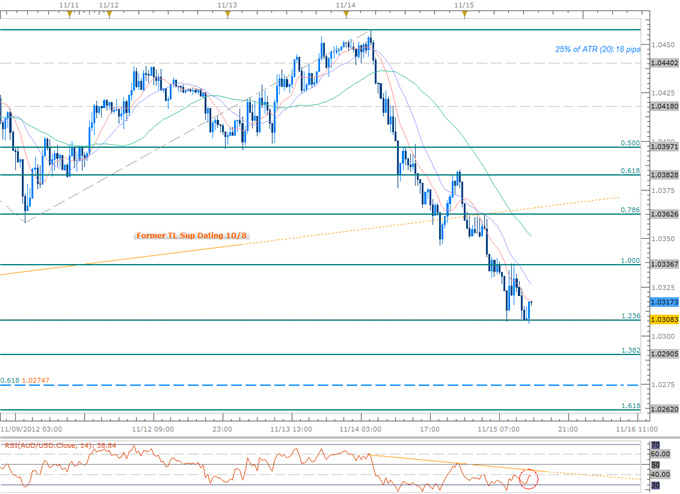 The 30min scalp chart shows the aussie encountering support at the 123.6% Fibonacci extension taken from the November 11th and14th peaks at 1.0308 in afternoon trade. RSI now looks poised for a test of trendline resistance with a breach above suggesting a near-term bounce may be underway. Topside resistance targets are eyed at the 100% at 1.0335 (confluence with 38.2% retracement on daily), 1.0363 and our topside limit at 61.8% extension at 1.0383. A breach above this mark invalidates our broader bearish bias with subsequent resistance targets seen at 1.04, 1.0418, and 61.8% retracement (daily) at 1.0445.

A break below the daily lows eyes the 138.2% extension at 1.0290. Note that the 61.8% retracement from the October 8th advance comes in at 1.0275 and may serve as a daily pivot with a close the key 161.8% extension at 1.0262 eyeing subsequent support targets. A daily average true of 68 pips and so yields profit targets of 18-20 pips per scalp depending on entry. Should ATRto pullback dramatically, adjust profit targets as needed to ensure more feasible scalps.

*We will remain flexible with our bias with a breach above the 1.04-figure eyeing subsequent resistance targets. It’s extremely important in these market conditions to give added consideration regarding the timing of intra-day scalps with the opening ranges on a session & hourly basis offering further clarity on intra-day biases. 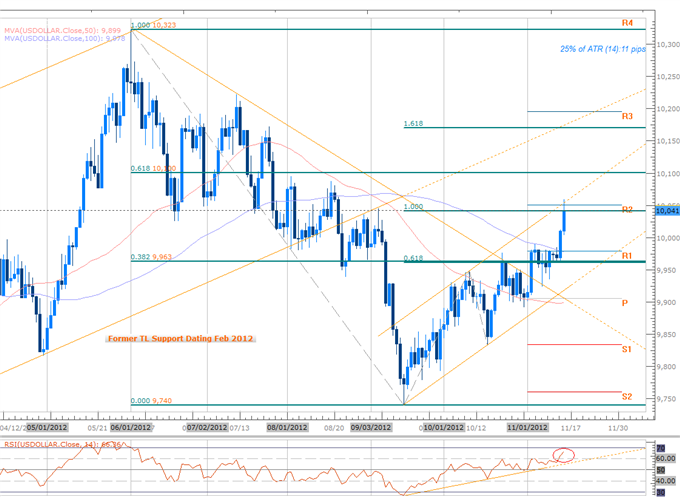 The Dow Jones FXCM Dollar Index (Ticker: USDOLLAR) tested critical resistance today at the near-confluence of the R2monthly pivot and channel resistance dating back to September. A close below the 100% Fibonacci extension taken from the September and October lows may prompt a near-term response with the greenback likely to ease into the close of the week. Note that RSI has now breached the 60-threshold for the first time since late June and marking its first directional break above the level since early May (which prompted a rally into the yearly highs at 10,323). Coupled with the decisive break above the confluence of the 100-day moving average and the R2 monthly pivot at 9980, the broader profile for the greenback continues to look constructive. Look for a pullback to offer favorable long entries with only a break below 9960 risking a steeper near-term correction. 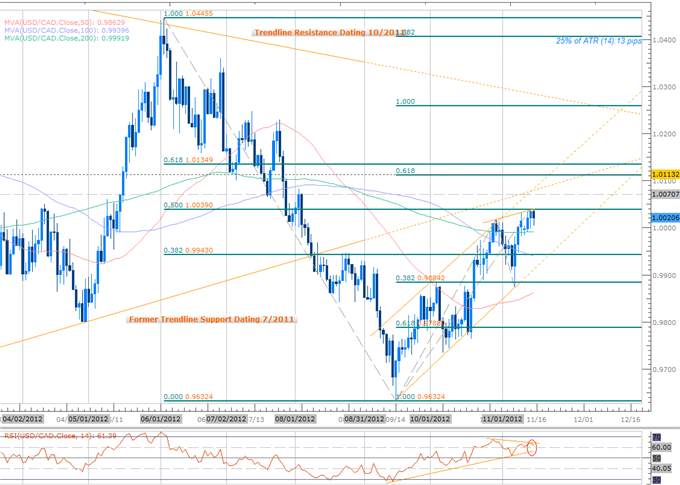 We have been closely watching the USDCAD as it struggles to breach key resistance at the 50% Fibonacci retracement taken from the June decline at 1.0040. RSI divergence has been identified on the daily suggesting that a near-term pullback may be just ahead. Look for initial support just below parity at the 200-day moving average at 9991 and the confluence of the 100-day moving average and the 38.2% retracement at 9940. Topside objective with a breach of the highs is the region between key 61.8% Fibonacci levels at 1.0115-1.0135. Only a break below the 38.2% retracement at 9884 invalidates our broader bullish bias.

View my StockTwits Chart Stream for Updates on these setups