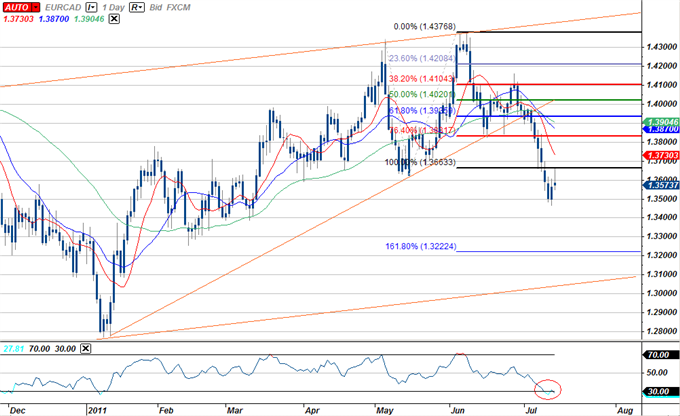 The EUR/CAD recently broke below the convergence of trendline support dating back to the start of the year and the 61.8% Fibonacci extension taken from the May 5th and June 8th crests at 1.3935. The subsequent move down has been swift, with today’s pullback offering traders short-term scalping opportunities. Today Fed Chairman Ben Bernanke pulled back expectations for QE3 when he cited that the central bank was not ready to engage in additional easing measures in his semi-annual policy statement before the Senate Banking Committee. The remarks come just one day after traders had seemingly started to price in additional easing measures after Bernanke told the House Financial Services committee that the Fed would act if the domestic economy continued to weaken. Subsequently rate hike expectations for the US’ largest trading partner rose as the Bank of Canada is likely to show increased willingness to normalize policy in the absence of stimulus measures. And with the ongoing uncertainty in Europe continuing to gather pace, accordingly, our bias on said scalp will be weighted to the downside. 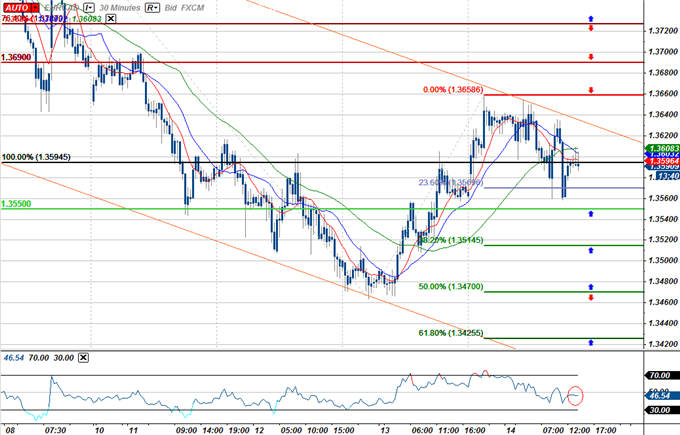 A 30min chart shows the pair continuing to trend lower within a well defined descending channel dating back to the June 28th high. Preferred short entry targets are eyed at the 100% long-term Fibonacci extension taken from the June 8th and 28th crests at 1.3595 followed by the upper bound trendline resistance currently at 1.3635 and the highs seen earlier today at 1.3655. Support profit targets are held below the 23.6% short-term Fib extension taken from the July 8th and today’s peaks at 1.3550, backed by the 38.2% extension at 1.3515 and 1.3470.

With an hourly average true range of 41.22 profit targets on said scalp should be between 28-33 pips depending on entry.Note that the scalp will not be active until a rebound off of resistance target 1 at 1.3550 or a break below support target 1 at 1.3550. Once the scalp is active the levels will remain in play until such time when either of the topside/bottom limit targets are compromised.

Although daily RSI sees the pair extending into oversold territory, we note that shorter term relative strength suggests risk to the pair remains to the downside. And while traditionally we would like to see the daily indicator support our bias, recent volatility leaves room for short-term moves to the downside. Taking that into consideration, we reckon a breech above the topside limit at 1.3655 negates the bearish bias on the trade with such a scenario eyeing topside break-targets at 1.3690, the 76.4% long-term Fib ext at 1.3725, and 1.3775. Likewise a break below the bottom limit at 1.3470 risks further losses for the euro with downside targets eyed at the 61.8% short-term Fib extension at 1.3427, followed by lower bound trendline support at 1.3390 and the 76.4% extension at 1.3370.

Event risk for the trade mounts tomorrow with Eurozone trade balance figures on tap. Consensus estimates call for the trade deficit to widen to -3.3B Euros, down from the previous print of -2.9B Euros. Traditionally the data has not been a major market mover and accordingly we rate it as low event risk. However with the situation in Europe continuing to top headlines, we thought it pertinent to note the print with the results for the European bank stress test also on tomorrow’s docket. May Canadian manufacturing shipments follow, with estimates calling for a read of -0.2% m/m, a slight improvement from the -1.3% m/m print a month earlier. A stronger read could further accelerate the EUR/CAD exchange rate to our targeted levels, with a weaker print presenting risk to our bearish bias.