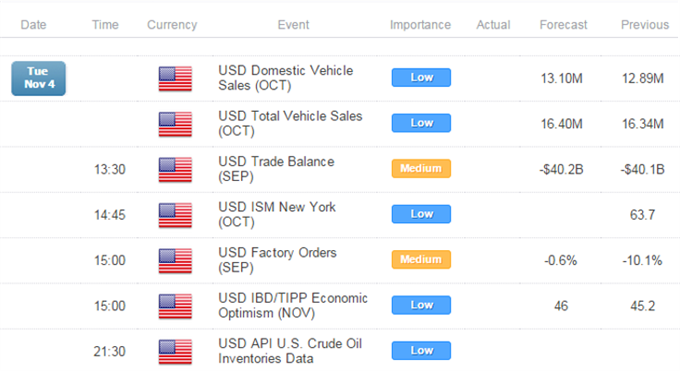 Crude oil has once again stolen the limelight in recent trade after it plunged by 3 percent to a fresh 2014 low. New reports of Saudi price cuts as well as a stronger greenback likely contributed to the drop. Looking ahead, lingering supply glut concerns threaten to offset positive demand side signals from strong US data, which in turn could keep pressure on WTI and Brent.

Similarly, gold and silver remain vulnerable to further declines on the back of continued gains for their pricing currency, the US Dollar. Upcoming Trade Balance and Factory Orders data may offer the reserve currency guidance over the session ahead. It would likely take a significant downside surprise to dampen the overwhelmingly positive sentiment towards the greenback.

Meanwhile, natural gas witnessed an astounding ascent on Monday with prices climbing by over 4 percent (their largest single day gain in several months). Newswires asserted that speculation over cooler US weather conditions contributed to the jump for the energy commodity.

Natural gas inventories were drawn down significantly after the harsh US winter in 2013/2014. The critical consideration going forward is whether incoming above-average storage injections will bolster expectations for ample US winter supplies. As the drawdown period inches closer a low level of inventories could be supportive for prices.

Crude has finally cleared the critical 80.00 floor after lingering signs of a downtrend (descending trendline, 20 SMA, ROC) warned of an imminent breakout. The close below the key barrier may set the commodity up for a descent on the 2012 low near 77.00.

An Evening Starhas emerged following copper’s retreat from trendline resistance. The key reversal pattern suggests some scope for further weakness. Yet traders should be wary of prematurely adopting short positions given the indication that an uptrend from the 20 SMA persists.

Palladium has posted a Piercing Line pattern which has received confirmation from a successive up-session. While a bullish signal, sellers still appear intent on capping the precious metals advance near the 38.2% Fib. near 800.9. Alongside signs of an emerging uptrend a more definitive close above the nearby barrier could open the next leg higher to 822.

Platinum has finally closed outside its1,242 to 1,289 range that had contained the precious metal over the past several weeks. Alongside signs of a short-term downtrend a bearish technical bias is preferred, placing the spotlight on the recent lows near 1,187. A climb back over 1,242 would act to confirm a bullish Hammer formation and warn of a base.