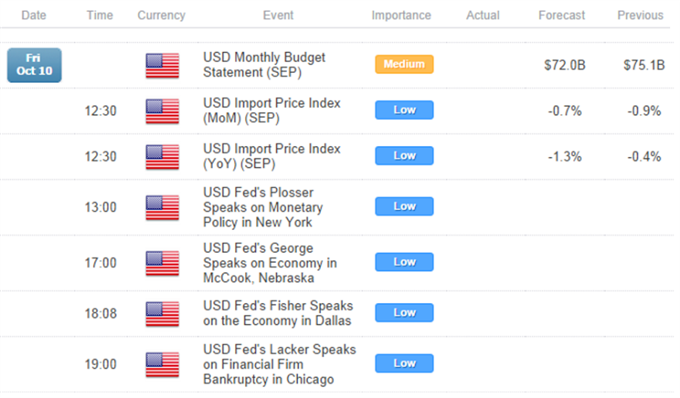 Crude oil benchmarks were slammed on Thursday with Brent plunging to a 27 month low, while its sibling WTI slid by more than 3 percent. A trio of factors continue to weigh on the energy commodities. These include lingering global supply glut concerns, fears of dampened demand from China and the Eurozone, as well as a stronger US Dollar.

A light US docket over the session may do little to inspire hopes of more robust growth from the commodity’s largest consumer. This in turn could leave WTI lacking bullish fundamental cues and continue to keep prices depressed. However, as noted in recent reports a corrective bounce should also not be precluded, given the speed and magnitude of recent declines.

Meanwhile, the precious metals have pared their recent gains at the hands of a strengthening greenback. Firmer Fed policy bets appear to have taken a backseat as broad-based risk aversion takes the reins for the reserve currency. Safe-haven demand for the USD tends to win out over the allure of gold unless the primary catalyst is geopolitical concerns. This suggests gold is in a precarious position as souring investor sentiment threatens to weigh on the yellow metal via the US Dollar side of the equation.

Crude easily cracked the target offered by the 2013 low in recent trade. Some small buying interest has been renewed at the 84.00 handle. Alongside the ongoing downtrend and absence of reversal signals a daily close below the nearby barrier would open a descent on the ’12 low at 77.00

Crude Oil: Awaiting Close Below 84.00 To Open Next Leg Lower

Gold is at a crossroads as it compresses under its descending trendline on the daily. The Rate of Change Indicator’s cross into positive territory signals some upside momentum. However, a Shooting Star offers a warning sign that bulls are not yet prepared to firm their grip on the yellow metal. This leaves a more constructive setup desired.

Silver’s recent rebound remains seen as corrective within the context of a broader downtrend on the daily (20 SMA and descending trendline). A more convincing close above former support-turned-resistance at 17.30 would be required to mark the potential for a more sustained recovery. Yet with downside momentum fading (reflected by the ROC) a consolidation may be a likely path for the precious metal.

Copper remains at a crossroads as it skims across the 3.00/1 floor after failing to post a more convincing daily close below the barrier. Amid the presence of a short-term downtrend a breakout could set the scene for a descent on the 2.96 barrier.

Palladium has failed to breach the 38.2% Fib. near 801. However, negative sentiment that has plagued the precious metal appears to be shifting as witnessed on measures like the Rate of Change indicator. This leaves it at a crossroads and awaiting clearer signals to offer a directional bias.

Platinum’s recovery has stumbled ahead of the 38.2% Fib. and 20 SMA. Alongside a Shooting Star formation the bears seem unprepared to relinquish their grip on prices. A close below the 1,263 floor would see the precious metal turn its sights on the recent lows near 1,186.