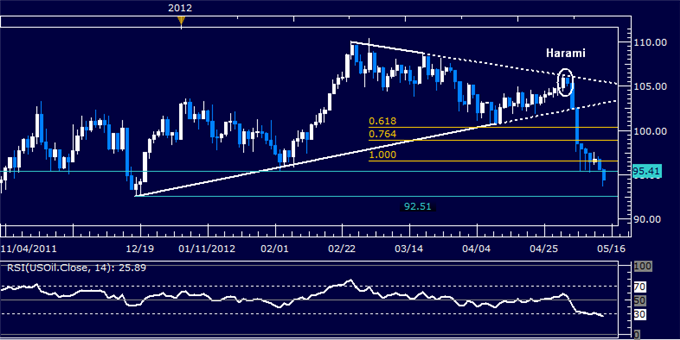 Lawmakers in Athens once again failed to come to terms on the structure of a ruling coalition at a meeting over the weekend. Markets are becoming increasingly concerned that a lingering impasse will push Athens to fall short of its obligations under the terms of the EU/IMF bailout, paving the way for Greece’s ejection from the Eurozone and possibly even the overall EU.This would be an unprecedented development with effectively unpredictable practical implications for financial markets, fueling a broadly defensive tone

S&P 500 stock index futures are pointing sharply lower ahead of the opening bell on Wall Street, arguing for more of the same as North America comes online. The US economic calendar is empty, putting the spotlight on a meeting of Eurozone Finance Ministers in Brussels. Traders on the lookout for any clues about a possible way forward beyond the Greek political stalemate.

Prices are testing through support at 1570.22, the 61.8% Fibonacci expansion level, with a break below that exposing the measured target implied by the Triangle pattern carved out since late March at 1548.21. For the time being, initial resistance is marked by the 50% Fib at 1591.15. 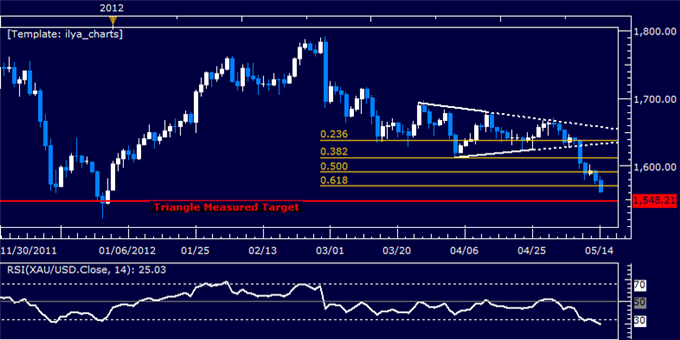 Prices are testing through support at 28.70 marked by a horizontal barrier as well as the bottom of a falling channel established since early March. A confirmed break on a daily closing basis exposes 27.06 as the next downside objective. Near-term resistance remains at 29.71 for the time being.

Prices took out rising trend line set from early October and are now testing though the 50% Fibonacci retracement at 3.606. A break below this boundary exposes the 61.8% level at 3.516. The trend line, now at 3.650, has been recast as near-term resistance. 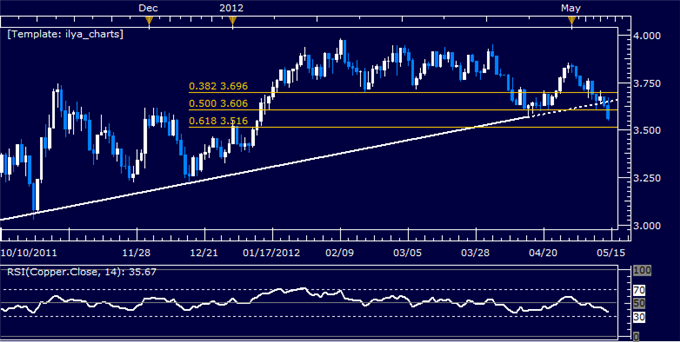