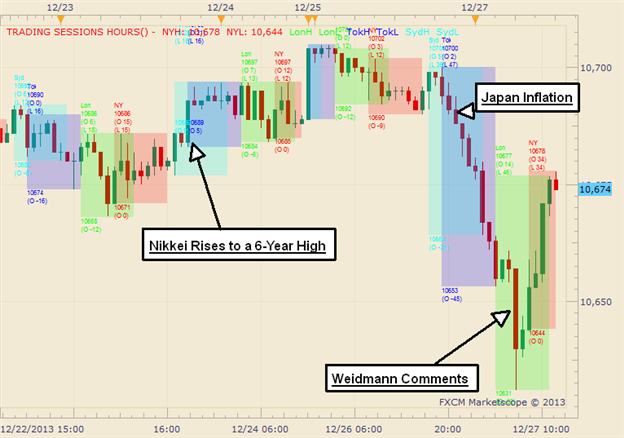 The Dow Jones FXCM Dollar Index rose slightly over the course of a quiet and short holiday week before taking a sudden dip to a weekly low at the start of Friday’s trading.

The greenback rallied against the Japanese Yen during the Tokyo session between Monday and Tuesday. The Nikkei equities index had risen to a new 6-year high, and USD/JPY has shown a strong positive correlation to the Japanese index over the past months.

Forex trading closed on Wednesday for Christmas, and the greenback index opened higher on Thursday despite a lack of significant news over the break.

Between Thursday and Friday, the Japanese Yen failed to react to slightly better than expected core inflation. Then, the Euro and Pound rallied significantly against the greenback in the London session, further intensifying the dollar selloff that began in the Tokyo session.

It is unclear exactly why the two European currencies rallied, and comments from ECB’s Weidmann that there is no license for monetary easing were a possible catalyst. However, the rally was soon unwound in the NY session, possibly as traders decided to ignore the comments from the well-known hawk. Alternatively, the move may have reflected regional haven flows, which led Currency Strategist Ilya Spivak to correctly predict the US Dollar would rebound as US markets came online.

The US Dollar Index looks ready at the time of this writing to close the week only slightly lower than where it began.