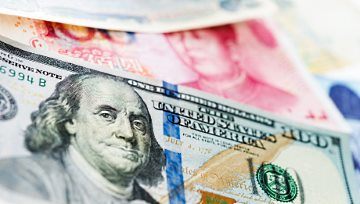 The Dow Jones Industrial Average enjoyed a series of bullish fundamental developments in the latter half of last week. An agreement to avoid another partial government shutdown was signed Thursday and positive trade war progress with China was heralded Friday. The President did his part to provide the market with optimism saying, “we are very close to a deal with China.” Subsequently, US indices enjoyed a slight rally to close the week higher.

Check out our interactive infographic A Brief Trade War History for insight on the current economic conflict and how future ones may develop.

Despite the apparent trade war progress, threats remain. As US equity traders know, optimistic comments from the President do not always translate to material agreements. If the same head fake occurs again this week, expect some trade war worries to pressure the index lower. 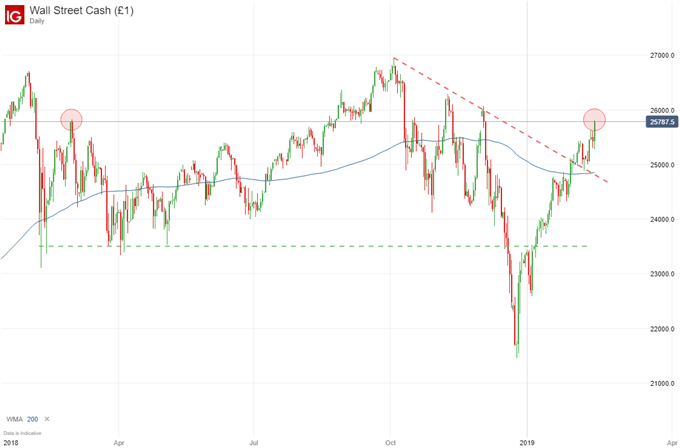 Other events for the Dow include Walmart earnings on Tuesday. The report could shed some light on the pitiful retail data released last week. Later in the week, FOMC minutes are due Wednesday. Fed minutes are always a hotly anticipated data release and the week ahead is no exception. As for their impact on equities, balance sheet commentary and a surprise increase in hawkishness (very unlikely) are two areas to lookout for.

Looking for a technical perspective on Equity? Check out the Weekly Equity Technical Forecast.

Last week I highlighted the precarious situation Germany and the German DAX found themselves in. On the precipice of a recession, GDP data came in as expected and thus a technical recession was narrowly avoided. With one risk in the rearview mirror the DAX now faces another, largely outside of its control. The United States’ Section 232 deadline is slated for February 17th and the Department of Commerce will present their findings on the national security threat of Eurozone autos. If the department finds them to be a legitimate threat, the US could impose auto tariffs on EU automobile exports.

Given the position of the DAX and Germany’s economy, such a move could prove deadly for the index. German automakers account for roughly 10-12% of the equity index. BMW, Volkswagen and Daimler AG are deeply integrated in the US market and generate significant revenue from the region. Thus, any escalation from the US would likely be met with retaliatory measures from Germany, effectively starting another round of tit-for-tat measures and another front in the US trade war. Follow me on Twitter @PeterHanksFX for commentary and updates on Section 232 progress and the impact on the DAX along with the Dow. 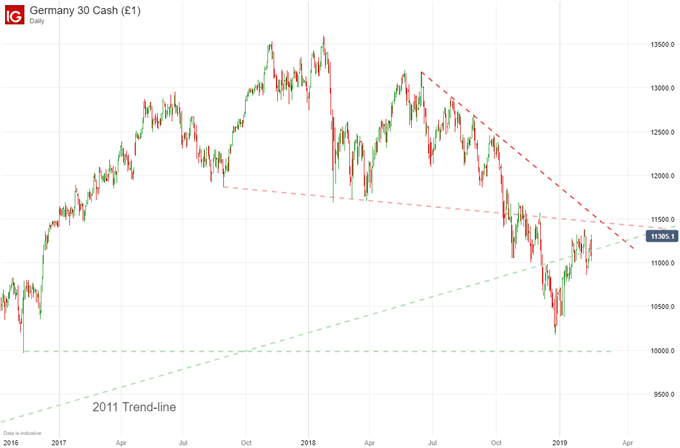