Crude oil may slide in the coming months as energy agencies continue to forecast a crude market swamped with supply at a time when demand has wavered. The International Energy Agency (IEA) reported their monthly prognosis of the oil market on Wednesday and the findings echoed concerns of recent reports from OPEC and the Energy Information Administration (EIA). While OPEC and the EIA lowered their most recent demand expectations, the IEA maintained the same figures from January at 1.4 million barrels per day. 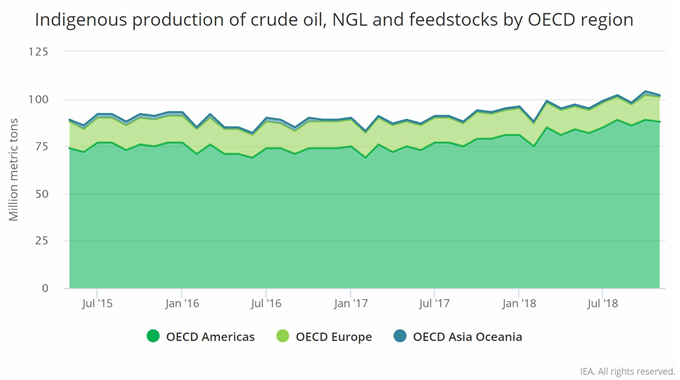 On the supply side, the agency highlighted the headline factors that may drive crude lower in the coming quarters. “The global oil market will struggle this year to absorb fast-growing crude supply from outside OPEC, even with the group’s production cuts and U.S. sanctions on Venezuela and Iran,” the agency said. Despite the already considerable increase in crude production outside of OPEC, the IEA again raised its forecasts for supply from non-OPEC members in the month ahead. The estimate increased to 1.8 million barrels per day in 2019, from 1.6 million barrels per day previously.

One key uncertainty in the crude oil market is Venezuela. The OPEC member faces a multitude of sanctions from the United States and political uncertainty as the current President faces mounting pressure from the public and other countries to step down. Should the issue be resolved quickly, crude production could return to levels seen in prior years and flood the market further. On the other hand, a prolonged struggle may sap even more production from the country and drain some of the excess supply in the market. Either way, the situation will be important to watch as the struggle unfolds. 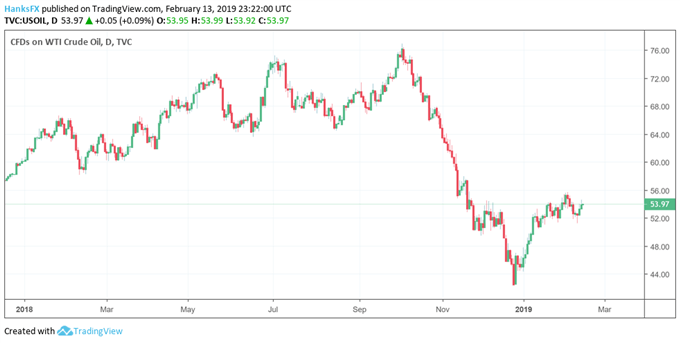 Despite the ominous report crude closed slightly higher than it opened Wednesday, marginally below $54.00. That said, Crude’s price remains considerably lower than its altitude in October when it traded north of $75.00. Recent concerns of waning global growth helped to drive the price lower on the demand side, and the supply glut offered by non-OPEC members may look to keep it pressured for the foreseeable future.