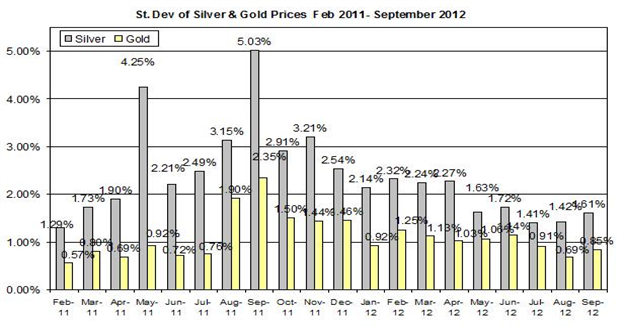 The prices gold and silver started off the week on positive note as both precious metals increased along with other commodities and stock prices. The unexpected rise in the U.S manufacturing PMI index to reach 51.5% may have contributed to the positive market sentiment. Further, Bernanke's speech in which he promised to keep short term rates low even if the economy will strengthen may have also contributed to the rise of bullion rates. Other items on today's agenda include: Reserve Bank of Australia – Cash Rate Statement, Great Britain 10 Year Bond Auction and Australian Trade Balance.

Bernanke gave a speech yesterday titled "Five Questions about the Federal Reserve and Monetary Policy". It's worth mentioning that he stated that the Fed will keep the rates low even if the economy were to recover:

"…we also extended our estimate of how long we expect to keep the short-term interest rate at exceptionally low levels to at least mid-2015. That doesn't mean that we expect the economy to be weak through 2015. Rather, our message was that, so long as price stability is preserved, we will take care not to raise rates prematurely. Specifically, we expect that a highly accommodative stance of monetary policy will remain appropriate for a considerable time after the economy strengthens".

Chairman of the Fed voiced again his concern over the "fiscal cliff" – in which the Congress will reduce spending and raise taxes – that should come into play at the beginning of year. I think this problem is another factor that could motivate the Fed to expand its monetary policy even further in the months to follow.

RBA Cash Rate Statement: the overnight money market rate of Australia's Reserve Bank remained unchanged at 3.5% - the lowest level since the end of 2009. If the RBA will decide to lower the rate again, this news may affect the Australian dollar that is strongly correlated with gold and silver prices;

Australian Trade Balance: The upcoming report will refer to August. In the previous report, the seasonally adjusted balance of goods and services expanded its deficit to $556 million in July. The export of non-monetary gold fell by $420 million (25%); if the gold exports will continue to fall in August, it might suggest a decrease in demand for non-monetary gold;

Today's publications of the RBA rate decision and Australian trade balance could affect the Aussie dollar, which is strongly linked with bullion rates. In Europe, Spain is still facing problems: The recent budget proposal helped rally the Euro but there are still perils Spain is facing. The country might need to bailout its commercial banks after German ministers stated that the bailout fund will only by applicable for new banking problems. Finally, if the Euro and AUD will continue to rally it could also pull up bullion.

For further reading: Gold And Silver | Outlook for October 1-5