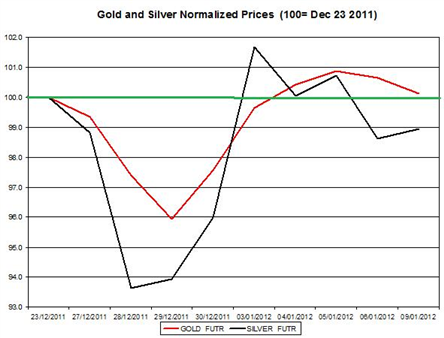 Gold and silver started the second week of 2012 with light changes as gold price moderately declined and silver price slightly rose. According to a recent Federal Reserve report, consumer credit is on the rise; this news might indicate that U.S. households are more willing to borrow funds and consequently might affect not only the stock markets but also commodities market. Today, China's trade balance report will be published.

China's Trade Balance: according to Reuters China's trade surplus will reach a four month high of $21.6 billion, but during 2011 China's surplus has shrunk to $160 billion; if this trend will continue it could indicate that China's economic growth is slowing down;

The Euro/USD changed direction and slightly rose on Monday by 0.38% to reach 1.2765; other forex exchange rates such as the Australian dollar also appreciated against the USD. If major currencies will continue to appreciate against the USD, it may also pressure up gold and silver. Currently, the Euro/USD is traded moderately up.

During January the U.S. 10-year Treasury yield rose by 0.09 percent point. This upward trend might indicate that the risk appetite in the markets has inclined. This rise in the U.S. LT yields may have also been stem from the recent Federal Reserve report showing consumer credit surged the most in a decade. Furthermore, as seen in the chart below, during December and January there were strong positive correlations among the daily percent changes of U.S. 10 year notes yield and gold and silver. If the LT U.S. treasury yield will further rise, it may also continue to pressure up gold and silver. 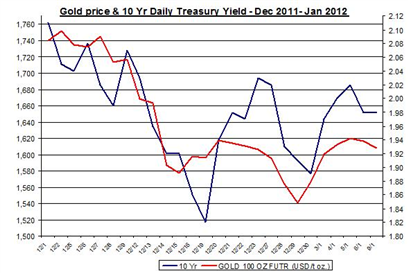 Gold and silver started off the week with light changes, but as the week will progress theforexand commodities markets will probably start to shift more sharply. This may be prompted by the upcoming ECB rate decision and the major U.S. reports to be published. Today, since there are few reports to be published, I speculategold and silverwill probably continue to zigzag around an upward trend as was the case in the past couple of weeks; theprecious metalswill be directed by the changes in theforex, U.S. treasuries and American stock markets as indicated above.