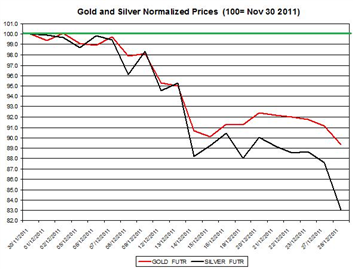 Gold and silver sharply declined yesterday along with the rest of market including oil, Euro, and major stock market indexes. The recent news from Europe including the recent rise in ECB's balance sheet to a record high €2.73 trillion, partly due to the recent lending to EU banks may have helped pull down the Euro. The concern that this expansion will result in a devaluation of the Euro may continue to affect the forex markets and consequently may also affect precious metals prices. Today, the Monetary Developments in the Euro Area report will be published, the U.S. Unemployment Claims report and U.S. Pending Home Sales report.

Gold sharply declined on Wednesday by 1.97% to $1,564.1; silver also plummeted and shed 5.24% off its price to reach $27.23. The chart below presents the development of gold and silver during December. During December gold decreased by 10.6% and silver by 17.0%. The last time gold and silver fell by such sharp rates was back in September 2011 when gold price declined by 11.4% and silver price by 28%.

U.S. Unemployment Claims:initial claims decreased by 4,000 to 364,000 claims for the week ending on December 17th; the number of insured unemployment sharply declined by 79k to 3.546 million during the week of December 10th;

The U.S. 10-year Treasury yield sharply fell on Wednesday to 1.93%; during December the 10 year treasury yield dropped by 0.15 percent point. This downward trend might indicate that the risk appetite in the markets has diminished. Furthermore, as seen in the chart below, during December there were strong positive correlations among the daily percent changes of U.S. 10 year notes yield and gold and silver. If the LT U.S. treasury yield will further drop, it may also continue to pressure down gold and silver. 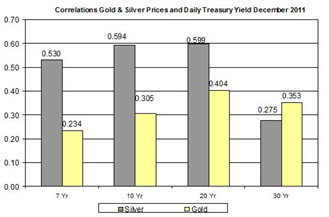 Gold and silver sharply fell yesterday and thus continued with their downward trend of the past several weeks. Yesterday's falls coincided with the sharp drop in the Euro and GB pound against the U.S dollar over the concerns of the stability of the EU. Not only did precious metals plummeted yesterday, but also other indexes and prices sharply fell including oil, and American stock market indexes. I speculate the downward trend of precious metals will continue throughout the rest of the week. The upcoming reports including U.S. pending home sales and U.S unemployment claims might also adversely affect gold and silver if these reports will present a further improvement in the U.S. economy.

Where are Gold and Silver Headed in 2012?

Get the recent gold and silver outlook report for free! Just sign up to TradingNRG's newsletter.