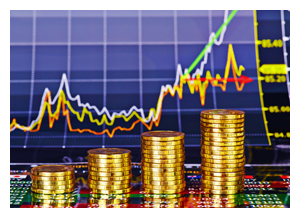 -After Friday’s major selloff, crucial to watch action in yields/equities.

-Sentiment on lower Chinese inflation could shift in the coming months.

Bank of Japan Monetary Policy Statements have remained a non-event as late to say the least. Nevertheless, with Yen pairs coiling for months and as we approach critical technical levels, one BoJ meeting over the next few months may prove to be that fundamental spark needed for further Yen weakness. As for catalysts for Yen strength, USDJPY and U.S. Treasury yield correlation remain strong and risk aversion vis-a-vis an equity market correction could support the Yen near term. Nevertheless, incoming data post-tax hike in Japan will prove key to whether the Bank of Japan will ease further. With current account falling through the floor and data softening moving into the sales tax hike, a further push by the BoJ looks likely. Nevertheless, the central bank may be waiting for concrete evidence of a softening economy on the back of the tax hike. Watch EURJPY in the context of German CPI data later in the week and AUDJPY in the context of Chinese CPI on Friday.

We’ve heard a lot from the Fed as of late and most of the developments have been priced in in regards to when the Fed sees rates rising. Although no surprises are expected, market participants will be noting any shifts on the FOMC in regards to how quickly policy must be normalized. It is important to note that voting members on the FOMC this year exclude known doves Bullard and Evans. Although the Fed’s lone bubble spotter (Jeremy Stein) is stepping down, more balanced additions such as Fischer, Brainard and Powell may hint at more hawkish sounding policy statements and minutes moving forward. The market has adjusted relatively well to the less dovish lean as of late, but the transition is likely to take place over the next year. This presents a risk of considerable more volatility when detailed statements are given.

As with the BoJ, playing the Bank of England rate decision remains a lost cause as of late. The central bank has not released an in depth policy statement with the rate decision in some time and this has usually led to GBP strength briefly before a quick retracement of those gains. It is notable that the ECB will not be taking place just after the BoE and this may lead to greater follow through on price action post-announcement. Watch for follow through on EURGBP as we will not have the ECB following the BoE Rate Decision.

Although China watchers have viewed declining official price levels as a good sign as it indicates the government has more room for stimulus endeavors, amid stresses in credit markets and domestic demand we may begin to see a shift in sentiment towards low CPI. If the decline in price levels continue, it may only be a matter of time before it is viewed in the context of serious stresses on domestic consumption and economic growth. Following disappointing PMI figures and a second corporate default last week, negative attention may return to the Australian Dollar as it pulls back from multi-month highs. Also note that price action in the Chinese Yuan is likely to move into the spotlight as leveraged positions remain at risk while a weaker FX rate spells trouble for costs of energy imports.

Although ECB’s Draghi last Thursday stated that he thinks inflation will pick up in April, seasonality studies may have a few words for him. The second quarter has been generally weak over the past five years and this may provide headwinds for the ECB. If the finalized German print comes in lower than the preliminary then we could see a renewed bout of short term EUR weakness before the trading week is out. Although ECB members have been dismissing QE, any hint of true deflation could force the central banks’ hand and quickly at that. 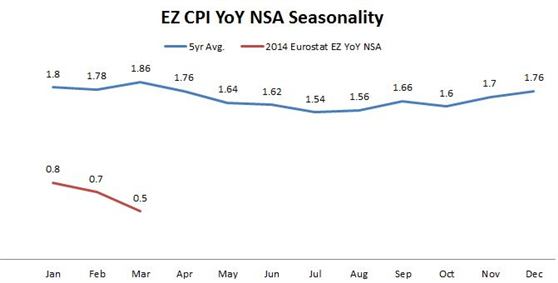 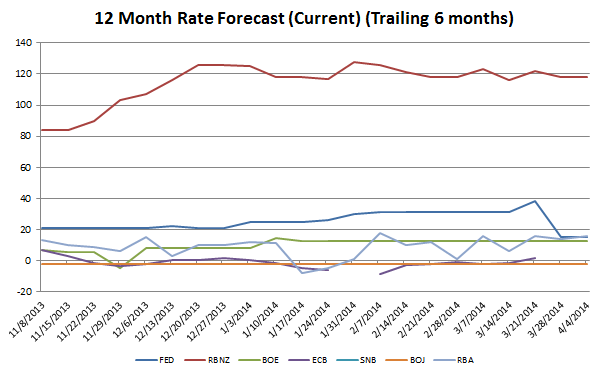