Most of this could be traced back to the Federal Reserve. The central bank didn’t just raise rates by 75 basis points, but Chair Jerome Powell basically in no uncertain terms said that the economy will have to go through some pain to get past the highest inflation in 40 years. And yet, markets continued to underprice how hawkish the central bank is expected to be in the coming years.

Meanwhile, Japan’s government had to step in and physically intervene to prop up the Japanese Yen. This followed another status-quo Bank of Japan interest rate decision, opening the door for a divergence to continue growing between it and the Fed. This was the first time the government had to intervene in 24 years!

The British Pound especially suffered against the US Dollar. GBP/USD fell about 3.6 percent on Friday, the worst single-day outcome since March 2020 and the 2016 Brexit Referendum. This brought Sterling’s exchange rate to its lowest since 1985. Gold prices also suffered as Treasury yields rallied across the board, dampening the anti-fiat yellow metal.

In the week ahead, all eyes turn to a slew of Fedspeak and the central bank’s preferred gauge of inflation. The latter, PCE core, is expected to rise to 4.7% y/y from 4.6% prior. Presidents from the Boston, Atlanta and Cleveland branches are on top. ECB President Christine Lagarde will also be speaking on Monday. Meanwhile, Russia is attempting to quickly stage votes on annexing captured regions in Ukraine. Italians also head to the polls to elect their 70th government. What else is in store for markets in the week ahead? 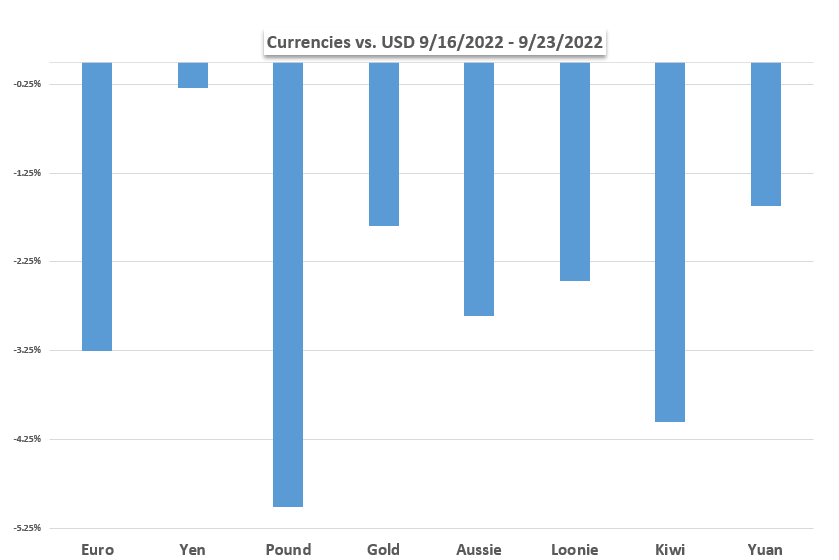 The update to the US Personal Consumption Expenditure (PCE) Price Index may keep the US Dollar afloat as the report is anticipated to show sticky inflation.

Growing recession fears and rising interest rates are likely to keep sentiment depressed, paving the way for the S&P 500, Nasdaq 100 and Dow to retain a negative bias in the near term.

Will the coming week bring much needed optimism for the Pound or will the slide to parity continue?

The Euro’s slide against the US dollar continues and unless data out next week surprises to the upside, EUR/USD will continue to make fresh two-decade lows.

Gold prices were little changed last week despite surging Treasury yields and a stronger US Dollar. The weekly outlook for bullion may depend on the stock market.

The post-Fed macro environment continues to be challenging for risk as Bitcoin slips back below $20,000.

The Australian Dollar movements remain dependent on US Dollar fluctuations as the Fed’s decision to hike by 75 basis points illustrates the impact of the world’s largest central bank.

The odds that the US Dollar gained the most since March 2020 last Friday, the odds of that happening were about 0.1%. With new 2002 highs in sight, where too for DXY next?

The S&P 500 led a tumble in global equities, but it has very noticeably not slipped its June swing low. The same is not true of the DAX 40, FTSE 100 and particularly the Hang Seng Index.

Gold has failed to extend its decline following a bearish breakout last week. Silver’s rally has stalled. Does this amount to a lag or a warning of trend reversal?

USD/CAD put in a massive breakout last week to run to fresh two year highs, negating a bear flag along the way. Can USD/CAD bulls continue to push?