For the most part, volatility continued to seep into global financial markets this past week. A burst of risk aversion on Friday evaporated a lot of optimism earlier in the week. A beacon of light was the Dow Jones, which climbed about 1.16%. Conversely, the tech-heavy Nasdaq 100 sank 3.17%. Shares of Tesla closed at their lowest since June 2021.

Another stronger-than-expected US inflation report unfolded for September. Both the headline and core rate surprised higher. This will not bode well for the Federal Reserve, which will likely have to step up its fight against raging CPI. Markets added about one more Fed hike to the outlook in 6 months. But, the longer-term path barely moved, hinting that a ‘pivot’ could still be in the cards.

Across the Atlantic, the UK’s FTSE 100 fell 2.36% as Prime Minister Liz Truss sacked Chancellor Kwasi Kwarteng. The government’s initial push for fiscal stimulus backfired as it placed the Tory’s policy prescriptions on a collision course with the Bank of England’s monetary tightening to fight inflation. The British Pound just barely squeezed out a rally against the US Dollar.

Looking at the Asia-Pacific region, Japan’s Nikkei 225 and Australia’s ASX 200 fell 0.45% and 0.68%, respectively. It seems that Japan, after intervening to stem a selloff in the Yen earlier in September, fell asleep at the steering wheel. USD/JPY crossed 147.65, closing above 148. That is the highest exchange rate since the early 1990s!

Be wary of the threat of intervention. Another push from Japan’s government could result in volatile price action. As for the economic docket, UK and Canadian, as well as Euro Zone CPI data are on tap. US earnings season also picks up pace. Companies like Goldman Sachs, Netflix and Tesla are reporting. What else is in store for markets in the week ahead? 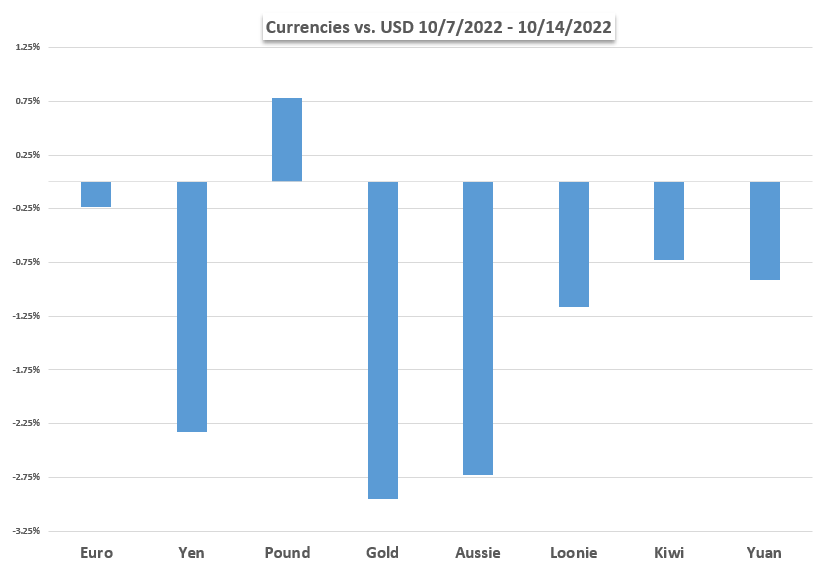 The U.S. dollar is likely to remain supported in the near term on bets that persistently high inflation in the U.S. economy will keep the Fed on a hawkish tightening course over the forecast horizon.

After Thursday’s slump and rally, US equity markets will be looking at a cluster of important Q3 earnings next week, including Tesla, Goldman Sachs, J&J, and Netflix.

Gold prices fell 3 percent last week. Another strong US inflation print means that the Federal Reserve will have to step up its fight against raging CPI. XAU/USD remains at risk.

PM Truss replaces Chancellor of the Exchequer Kwarteng with Jeremy Hunt. Will she follow him out the door?

Markets anticipate a slower rate of hikes between the Fed and Bank of Canada going into year end. Policy divergence highlights bullish continuation themes in USD/CAD

While the weekly USD candle showed indecision an extreme trend remains in-place and hasn't yet shown indication of breaking down.

Stocks had a volatile one last week and ended it just about where they started, in aggregate; coming week could be a big one for direction.

Gold has suffered big blows this year as USD strength continues to run. With XAU/USD testing support, do bears have what it takes to clear support at 1640?

The price of oil may attempt to retrace the decline from the monthly high ($93.64) as a bull-flag formation appears to be taking shape.

Sterling has set the monthly range below resistance and the battle lines are drawn for the rally off multi-decade lows. Levels that matter on the GBP/USD weekly chart.

USD/JPY is about to run into one of the most significant resistance levels it has seen in recent months. What are the signposts to watch and the key levels to watch?