Bitcoin prices surged more than 13% this week on the tail of a 11.6% rally last week with BTC/USD trading near 5-month highs. While the breakout does keep the broader outlook constructive, the immediate advance may be vulnerable in the days ahead as price approaches technical resistance just higher. These are the updated targets and invalidation levels that matter on the BTC/USD technical price charts. Review my latest Strategy Webinar for an in-depth breakdown of this Bitcoin setup and more. 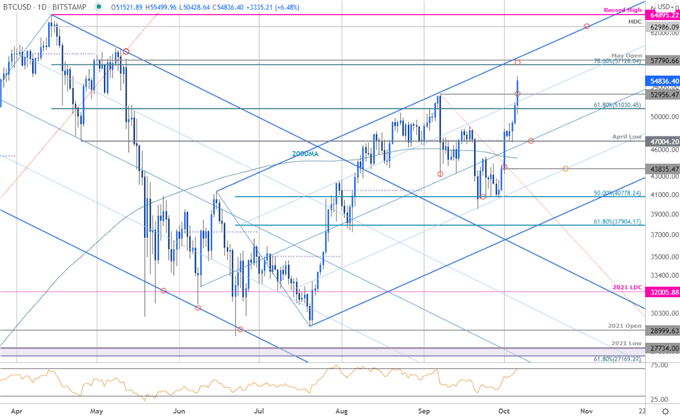 Technical Outlook: In my last Bitcoin Price Outlook we warned that the BTC/USD sell-off had responded to near-term downtrend support - “A new low has registered- we’re now on the lookout for downside exhaustion / low in price.” We got one! The lows at 39573 held into the close of September with a massive breakout into the October open rallying more than 40% off the recent low- that advance has now extended into four-month highs.

Initial resistance is eyed at the 78.6% Fibonacci retracement of the April decline / May open at 57128/790- a breach / daily close above is needed to keep the immediate rally viable with such a scenario exposing subsequent resistance objectives at the upper parallel / yearly high-day close at 62986 and the record highs at 64895. 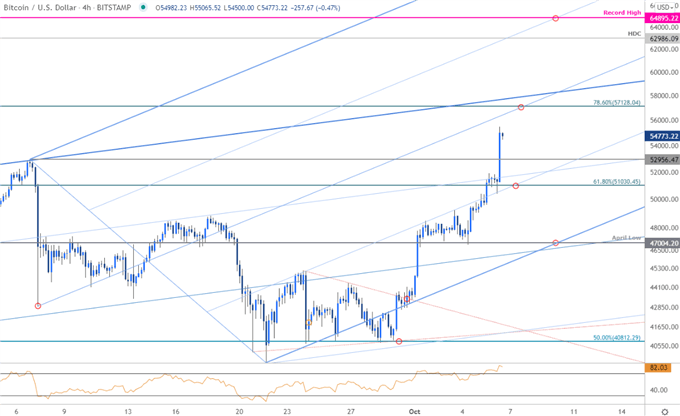 Notes: A closer look at Bitcoin price action shows BTC/USD trading within the confines of a proposed ascending pitchfork formation extending off the September lows. It’s not the cleanest setup but the slope has defined the inflections rather well on this advance. In any event, initial support now back at 51030 with near-term bullish invalidation now raised to the April lows at 47004.

Recommended by Michael Boutros
New to Crypto Trading? Download Our Bitcoin Trading Guide
Get My Guide

Bottom line: The Bitcoin breakout is now approaching initial resistance targets – risk for inflection just higher into the median-line. From a trading standpoint, look to reduce long-exposure / raise protective stops on a stretch towards 57128- losses should be limited to the lower parallel / 47004 on pullbacks IF price is heading higher with a topside breach exposing targets into the record highs.