What is Bitcoin? Understanding Bitcoin as a Cryptocurrency

Bitcoin is perhaps the best-known cryptocurrency. Originating in 2008, it was only around 2015 that it started to make headlines as a highly volatile tradable asset, as well as serving as a medium of exchange and, debatably, a store of value. In this article, we explore what Bitcoin is, including a brief history, how to trade it, and what affects the Bitcoin price.

For a more in-depth in introduction, download our free guide to Bitcoin.

Bitcoin is traded on a peer-to-peer basis using a distributed ledger called the Blockchain, and the Bitcoin exchange rate to the US Dollar and other major currencies is determined by supply and demand, as with other global exchange rates. The Bitcoin price can be subject to volatile swings, but many see Bitcoin as a store of value against government-backed fiat currencies.

How is Bitcoin mined?

Bitcoin is mined by the process of adding transaction records to the Blockchain, a ledger of digital information stored in a database. This is performed through the solving of complex mathematical problems with the assistance of specialist software. Miners are issued a certain number of Bitcoins in reward for solving problems, a number that goes down the more coins are mined.

Bitcoin forks are changes in the protocol of the Bitcoin network, introduced to add new features to a blockchain. In August 2017, Bitcoin Cash was formed, while in October of that year, Bitcoin Gold was created.

Bitcoin was created in 2008 by an anonymous individual under the pseudonym ‘Satoshi Nakamoto’. For many years, the BTC price hovered just above $200 a coin, but by December 2015 rose above $400 as its usage in payments, and its speculation over future utility, grew.

After unprecedented interest from institutional investors fueled speculation, the price rocketed to almost $20,000 in December 2017. By the following month the bubble burst, causing BTC to lose more than 75% of its value year-on-year by the end of 2018. However, there was a recovery in 2019 as awareness spread that reduced incentives for mining in the following year would hit supply. Then, demand grew as crypto hype returned following Facebook’s June announcement of its Libra cryptocurrency.

The below chart shows the extraordinary rise and fall of the Bitcoin price over recent years, with reasons for the extreme price movements revealed alongside. 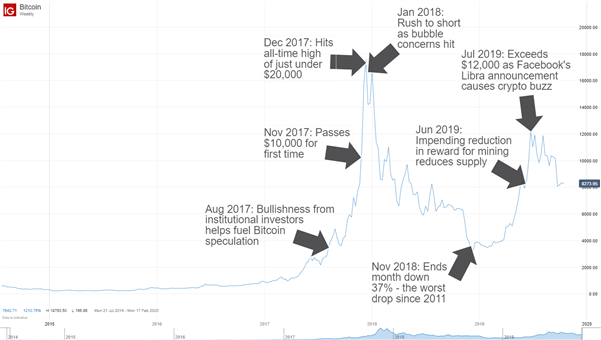 What affects the Bitcoin price?

The factors that affect the price of Bitcoin include speculation, political risk, regulatory moves and the governance of the cryptocurrency. Volatility is a key factor to bear in mind when contemplating the Bitcoin forecast today; the dramatic price fluctuation is a benchmark for the swings the cryptocurrency may experience in future and gives traders an idea of the risk levels involved in trading Bitcoin.

You can find the historical Bitcoin price on our chart and latest news and real time analysis on the Bitcoin exchange rate.

Is Bitcoin a Store of Value?

Bitcoin is often considered a store of value, due in part to its finite supply; the maximum number of Bitcoin that can exist is 21 million. Analysts observe that the cap makes it more desirable as there cannot be an influx in supply that pushes down prices, as a gold rush, for example, might do.

Also, while not widely accepted as currency, Bitcoin has enjoyed at least some utility as a medium of exchange in certain sectors such as travel and jewelry.

However, some Bitcoin detractors argue that the cryptocurrency has little intrinsic or practical value due to the fact that it’s not a physical asset, it doesn’t have widespread use as a medium of exchange and is worth merely what uninformed speculators are willing to pay.

How to trade Bitcoin

Bitcoin is actively traded against the world's major currencies across decentralized markets. Bitcoins are kept in so-called Bitcoin wallets, which depend on private keys and cryptography to secure its Bitcoins to a specific entity or user.

By comparison to government-backed global currencies, Bitcoin remains fairly complex for the typical user to acquire and use in regular transactions. Growing interest and significant global investments in Bitcoin wallet and Blockchain technology have nonetheless made buying and selling Bitcoin far more accessible to the average user. And indeed, growing acceptance by government entities have ameliorated the ambiguity of legal and regulatory status for Bitcoin and Bitcoin exchanges.

Keen on getting started trading Bitcoin? We offer a helpful guide to day trading Bitcoin and other cryptocurrencies, revealing top tips on navigating the price moves.

Keep up to date with our live Bitcoin chart and expert news and analysis, and don’t forget to download your free bitcoin trading guide to boost your essential knowledge. We also recommend exploring the comparison of Bitcoin vs gold to further your cryptocurrency trading insights.