- GBP/USD set a fresh 2017 high after yesterday’s FOMC announcement; but after that high printed around 1.3160, bears have taken over and driven prices-lower.

- The driver from this morning appears to be news of Sir David Ramsden being appointed as the new BoE Deputy Governor, replacing Charlotte Hogg after her resignation earlier in the year. Mr. Ramsden is considered to be dovish, and this could delay potential rate-hike scenarios at the BoE.

- An analyst pick was issued for Short GBP/USD yesterday, and after coming ~5 pips from getting stopped out, the trade has now moved in the money.

In our last article, we looked at GBP/USD after the pair had moved back to the 1.3000 level. While the potential for a prolonged and extended bullish run in the British Pound remains very attractive, essentially as a mean-reversion scenario after last year’s ‘sharp repricing’ around the Brexit referendum, the necessary ingredient for such a theme appears to be lacking. That necessary ingredient would be a more hawkish Bank of England capitulating from their uber-dovish stance in response to Brexit.

In June, it began to appear as if this could legitimately happen. Inflation came-in at 2.9% for the month of May, and the Bank of England saw three dissenting votes in favor of a rate hike. This would be the most votes for a rate hike from the MPC since 2011, and given the tone of inflationary pressure, it seemed as though this theme could last well into the summer. When Mark Carney himself opined on the topic towards the end of June, alluding to the fact that rate rises may be on the horizon, Cable finally climbed back-above the vaulted 1.3000 level.

But as we came into July, that theme didn’t seem all that prosperous when June inflation printed at 2.6%. And for a Bank of England that has been persistently dovish, worried of the potential ramifications of Brexit, this might not be enough to see a larger shift within the MPC in favor of a more-hawkish stance. But the U.S. Dollar has been extremely weak; so after Cable sold down to 1.2930 last week, the pair began to move-higher as USD-weakness took over. Around yesterday’s FOMC meeting, the Dollar cratered-lower, and this led to a fresh high in GBP/USD at 1.3159. 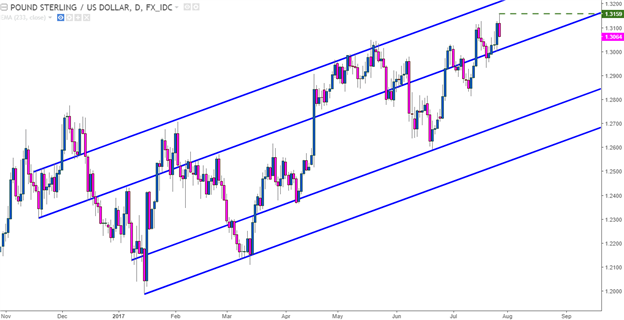 Earlier this morning, Sir David Ramsden was announced as the new BoE Deputy Governor, replacing Charlotte Hogg after her resignation earlier in the year. The general feeling around Mr. Ramsden is that he’s dovish in nature, and this could further delay the potential for rate hikes out of the Bank of England. This, combined with a strong U.S. Durables Print bringing some strength back into the U.S. Dollar, has helped to tilt the pair-lower. As of this writing, we’re approximately 100 pips off the highs just hours after that announcement, and there has been little bid-side action to yet show-up as support. While Mr. Ramsden can certainly have impact for GBP in periods looking-forward, he doesn’t start in his new role at the bank until September 4th, which means that he will not yet be active for next week’s Super Thursday event out of the Bank of England.

Next Thursday will likely be big for British Pound price action. As inflation was ticking-higher, the thought was growing that this could be the meeting in which we see the BoE capitulate from their uber-dovish stance. But given current dynamics: A stronger GBP that will likely lead to even more inflationary pressure, inflation still remaining well-above the bank’s 2% target as well as the fact that the BoE appears rather committed here, and we likely won’t see any hawkish moves just yet.

For current context: Traders are likely going to want to remain cautious here, particularly if chasing the bearish move-lower. Stops would be relatively expensive if going above that prior swing-high, and traders with bearish approaches would likely want to target the 1.3000 handle as an initial stopping point, which would spell a very unattractive risk-reward ratio.

The level of 1.3045 could be helpful for near-term strategy. This is the 50% Fibonacci retracement of the most recent bullish move, and if prices fall-below here, the prospect of continued downside will look a bit more attractive. This could also open the possibility of lodging stops above the previous swing-high of 1.3084 for a more attractive area to manage risk. For longer-term scenarios, a break-below 1.3000 will open the door for bigger picture bearish plays; but until then, remain cautious, remain vigilant in GBP. 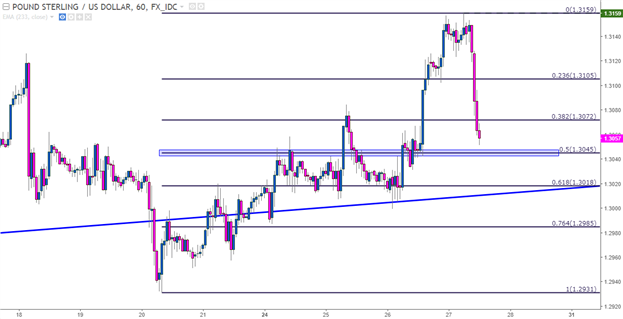