- GBP/USD set a fresh 10-month high earlier in the week; but has since reversed with prices falling back-below the vaulted psychological level of 1.3000.

In our last article, we looked at the bullish break of the bull flag formation in GBP/USD. As we shared, this opened the door to bullish continuation strategies, as a recent influx of hawkish clues pointed to the fact that the BoE might need to look at rate hikes sooner rather than later. At the center of that argument, however, was inflation.

Inflation is the elephant-in-the-room of the British economy at the moment. After the ‘sharp repricing’ in the value of the British Pound around the Brexit referendum and the ensuing dovish campaign from the BoE, the prospect of stronger inflation seemed simply mathematical. As prices in GBP/USD had dropped by more than 20% in a very short period of time, logically, we would see prices beginning to rise for the import-heavy economy. But despite this risk, the BoE remained uber-dovish under the expectation that the risks of Brexit hitting the British economy would far outweigh the risks of stronger inflation.

The brutal slowdown that the BoE was expecting around Brexit hasn’t really shown up. But inflation has continued to rise, and last month saw CPI come in at an annualized 2.9% clip, which had started to create a bit of commotion within the BoE; and at last month’s rate decision, we saw the most votes for a rate hike since 2011 as the MPC voted 5-3 to hold rates flat. In the following weeks, we heard from various members of the BoE that opined that higher rates might be necessary to ward off these stronger inflationary forces. When Mark Carney made similar remarks, warning that rate hikes may be on the horizon for the U.K., the British Pound went into full-bull mode as prices drove above the psychological 1.3000 level. 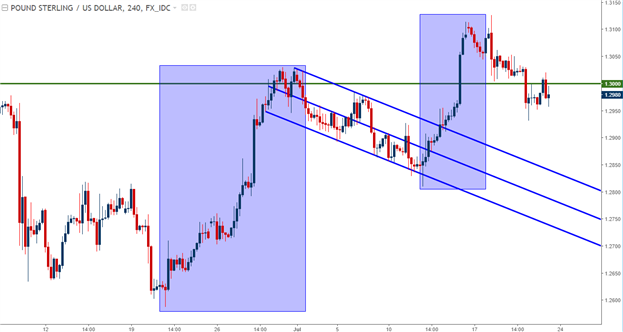 On Tuesday of this week, U.K. inflation for the month of June was released. Inflation came-in at an annualized 2.6%, falling below the expectation of 2.8%. This seemingly removed a bit of pressure from the situation, as softer inflation can allow the BoE more time before needing to adjust rates. In response to this softer inflation print, the British Pound fell against most major currencies; the U.S. Dollar included even as the Greenback was driving down to fresh yearly lows.

This leaves Cable in a fairly vulnerable state, and this can urge caution for the bullish continuation approach, particularly as the pair trades below the venerable 1.3000 level. Bearish price action has begun to show on the hourly chart as support has been unable to hold. Should the lower-high that printed at 1.3020 remain respected in early trade next week, this can open the door to short-term bearish momentum strategies in the search for a continuation of lower-lows and lower-highs. 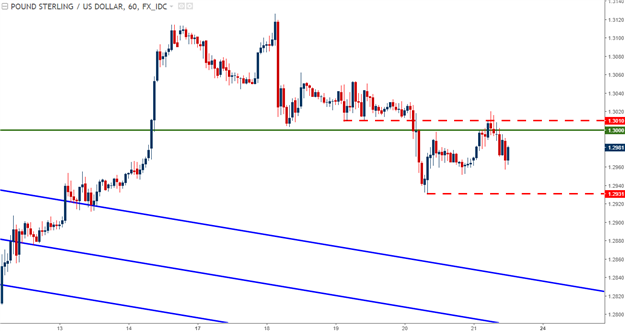