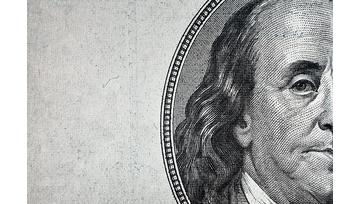 - The Fed made no actual moves, but alluded to the prospect of balance sheet reduction beginning ‘relatively soon’. This could take the Fed’s attention away from further rate normalization, and is being construed as USD-negative.

At yesterday’s rate decision from the FOMC, the Federal Reserve opened the door to begin balance sheet reduction at their next meeting in September. That meeting is almost two months away, to be held on September 20-21, so it gives the bank ample time to evaluate progress in the U.S. economy before making any additional moves. The Fed just hiked rates in June, and with the prospect of the beginning of Quantitative Tightening being on the radar in the near-future, market participants do not appear to be buying the idea that the Fed might hike four times going out to the end of next year. This is what the Fed had said they were looking at when they last released updated forecasts, and at this point – markets are pricing in zero chance of a move in September, and 49.1% for a move in December (all probabilities derived from CME FedWatch). But it’s when we get into expectations for 2018 that matters get interesting: The Fed had previously said that they were looking at three possible hikes throughout next year; and at this stage, there is but a 19% chance of getting another hike before June, 2018.

In response to the Fed’s statement yesterday, the U.S. Dollar slid down to set fresh one-year lows, coming very close to the prior swing-low at 93.02. EUR/USD ripped-higher with aggression, as the pair broke above the swing from ‘China’s Black Monday’, set on August 24th of 2015, to set a fresh 2.5 year high. And this appears to be a fairly clear example of markets discounting the Fed’s hawkish outlook towards rate policy as the very uncertain process of Quantitative Tightening looks ready to begin very, very soon. 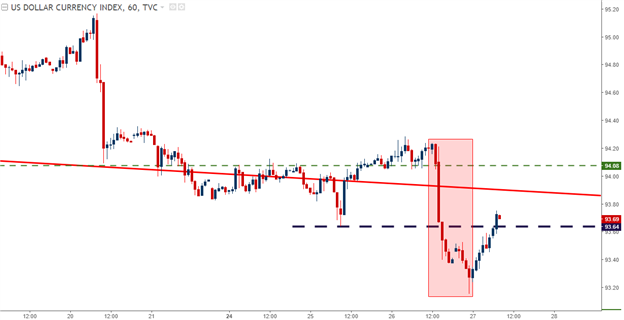 One likely reason for the sell-off in the Dollar is that, given the Fed’s apparent commitment to balance sheet reduction, we may not see as many rate hikes in the near-term. The Fed has said for a while that they want to ‘normalize rates’ before looking to address the balance sheet. Throughout this year, the topic of ‘balance sheet runoff’ has gotten quite a bit of attention, as the Fed has started to talk about their plans with the $4.5 Trillion portfolio sitting on their balance sheet.

From what the Fed has communicated, it appears as though the bank wants to tighten the money supply with a dual-pronged approach; by letting maturing bonds and coupon payments from their currently-held portfolio ‘run off’ while also looking to hike rates to further normalize policy. But U.S. data has already begun to slow, and the Fed even voiced concern about lackluster inflation at yesterday’s meeting. So, if we are seeing a less-ebullient backdrop in the United States, the strength may simply not exist for the Fed to embark on both of these paths, and given the Dollar’s performance around yesterday’s FOMC statement, it would appear that markets are expecting little on the higher rates front.

It’s rates that drive capital flows: When a Central Bank hikes rates, there are even more reasons to buy that currency (to capture the higher rate). But markets are forward-looking, and rarely will they wait around for confirmation before beginning to price-in potential themes. And with the Fed taking this stance on balance sheet reduction, it appears that markets are even less optimistic that the bank will stick to their plans for continuing to hike rates into the end of next year. This is also likely a reason for the profound USD-weakness against the Euro so far in the year, as markets are now pricing in actual interest rate hikes from Europe before the end of next year. So, throughout 2017, we’ve seen U.S. rate expectations slide-lower, partially because of the introduction of balance sheet reduction; while simultaneously seeing the rise of European rate expectations. In response, EUR/USD has driven up to a fresh 2.5 year high before the ECB has even budged on the prospect of stimulus exit. 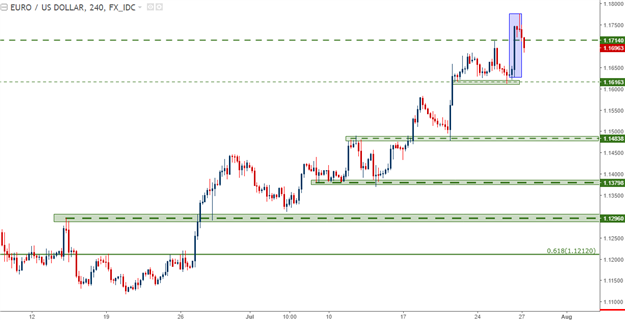 If this all sounds very bad for the U.S. Dollar, it could be. We’re entering a fairly unique period in the history of financial markets, and we don’t really have a template for what happens when trillions of dollars, euros and yen worth of global stimulus gets taken out of the financial system. This has created many uber-bearish outlooks for the Greenback as the Dollar’s troubling run in 2017 has now eclipsed the -10% marker.

But as we drive down to deeper ‘extreme lows’, this heavily-shorted market becomes a bit more vulnerable to positive data. Fundamentals don’t necessarily drive prices: Fundamentals drive market behaviors, and that drives prices. This is relevant because if a market is already 100% short, and there is nobody remaining on the sidelines to sell, then prices should rise as there is no supply, and anyone wanting to buy (whether it be to take long exposure or to close off a bearish position) will need to lift their offer to incentivize new sellers. We’re not at 100% short levels in the Dollar, but sentiment has dove to extreme lows after the troubling bear run of 2017. This means that the litmus for continued losses is likely rather high as expectations have crept-lower throughout the year, and positive data prints or data that comes-in above market expectations could create a ‘short squeeze’ scenario as rising prices are hastened by the additional covering of shorts from a heavily-sold market.

As we mentioned above – markets are constantly forward-looking. What’s in the rearview is a troubling down-trend for the Greenback. What’s in the current landscape is a heavily-shorted USD market with a series of U.S. data prints that could offer some information for near-term economic forecasts around the Dollar.

Nobody really knows how this is going to go. We’re basically living in a test tube across macro markets right now, as the world has never seen this much stimulus jammed into a globalized economy before. So we simply have no idea around what may happen when that stimulus begins to get removed from capital markets; and the Fed’s previous comments that QT can take place along with rate normalization seems to be a bit of a stretch, at least at this point, as U.S. data has already begun to slow after we’ve seen four rate moves over the past two years.

For traders and markets, this can be a confusing time, and as an example, VIX just set an all-time-low after yesterday’s Fed meeting. The best way to move-forward for market participants and traders is to follow price action on the chart in order to signal any new themes that may come-about. This is what helped to show that EUR/USD up-trend earlier in the year, and this also helped to signal the oncoming of USD-weakness after the Fed’s rate hike in March when the Dollar burst down to fresh lows. On the chart below, we’re looking at a series of potential resistance levels in the U.S. Dollar, and should these come into play, we may have an early look at what could develop into a bullish move. 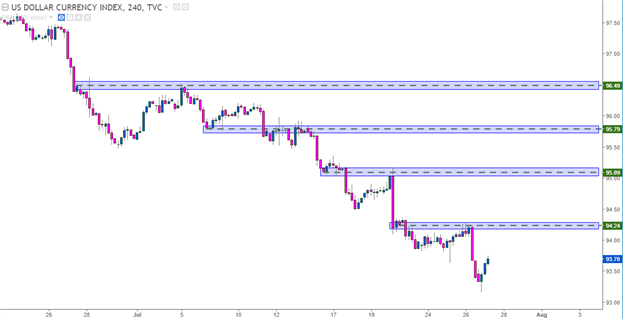