British Pound Falls as Inflation Disappoints, but Will GDP Revive the Trend? 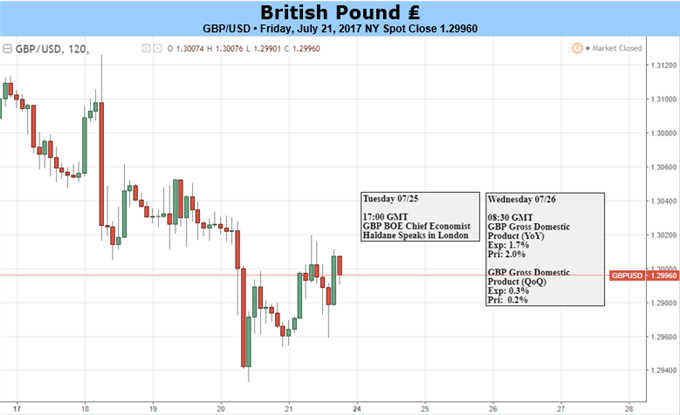 As we came into this week, there were very legitimate bullish prospects for the British Pound, and this wasn’t necessarily a new story. Ahead of Brexit, Bank of England Governor, Mark Carney, warned that the British Pound could undergo a ‘sharp repricing’ should U.K. voters elect to leave the EU. He also warned that this could be coupled with a whole host of unsavory elements; such as slower growth and higher unemployment. Meanwhile, the ‘sharp repricing’ in the value of the British Pound could lead to unsavory levels of inflation; and this could put the bank in the unenviable position of having to choose whether to mold monetary policy to either a) support the British Pound, which could stem inflation while risking even higher levels of unemployment and even slower levels of growth, or b) support growth and employment by cutting interest rates, which could drive even more weakness into GBP, which could expose even stronger inflationary forces.

It wasn’t more than a week after the Brexit referendum that the Bank of England showed their hand. In response to the flurry of the incalculable risks that could come about, the BoE instituted uber-dovish monetary policy in the effort of supporting growth in the British economy. In August of last year, the Bank of England launched a ‘bazooka’ of stimulus that involved buying a significant chunk of the economy’s corporate debt market. This further depressed interest rates, and the British Pound followed. Given that there was little hope for any hawkish outlays from the BoE, as they had made their dovish stance rather clear, there was an absolute dearth of demand for the British currency. This led to the ‘flash crash’ in October as the pair tested the 1.2000 level in thin Friday trade after October NFP’s.

But as the British Pound languished near 30-year lows, levels not seen since the Plaza Accord in 1985, those inflationary forces continued to build. Slowly but surely , inflation began to print at higher levels as the ‘sharp repricing’ in the value of the British Pound began to show consequences. Meanwhile, the brutal slowdown that the BoE was afraid might happen after a Brexit scenario simply hadn’t showed up: So the net impact of Brexit, at least at this rather early stage, appears to be a BoE induced bearish trend in Sterling that, eventually, will force inflation to move-higher.

Around the beginning of the year, the theme du jour for GBP was ‘inflation tolerance’ at the BoE. As in, how strong could inflation be before the bank actually began to look at tighter policy options in the effort of stemming those higher prices? Nonetheless, the Bank of England continued to remain dovish with a very passive posture towards inflation. That appeared to begin to change in June: In June, inflation for the month of May came-in at an annualized 2.9%, and at the BoE rate decision just a week later, we saw the most votes for a rate hike since 2011. With three members dissenting in favor of a rate hike, a shift had started to emerge in which a portion of the bank appeared to capitulate from that previously cautious stance. When Mark Carney himself offered similar comments a few days later, remarking that ‘some removal of monetary stimulus is likely to become necessary’ should investment and wages grow, bulls bid GBP-higher with a vengeance.

This was like the red cape being waved in front of buyers, and a stampede above 1.3000 followed shortly thereafter. It appeared that there was finally a theme for traders to work with that could offer some extended continuation potential. After a 50% retracement of that bullish move that began on June 19th, buyers returned to bid prices in GBP-higher ahead of this week’s inflation print. After setting a fresh ten-month high at 1.3126, inflation for the month of June came-in below expectations. June inflation printed at 2.6%, still well-above the BoE’s 2% target; but not likely strong enough to retain those elevated pulses at the BoE.

The remainder of the week saw bearish price action in GBP as a bit of pressure was removed, from both the BoE and the British economy, and this was taking place even when the U.S. Dollar was spiraling down to fresh yearly lows.

Next week brings one significant data print out of the U.K. and that is GDP for the second quarter, set to be released on Wednesday morning. First quarter GDP growth wasn’t great at .2% (revised lower after initially printing at .3%); and most estimates for this Wednesday are around the same .3%. Should this print at .4% or above, we could see a return of bullish price action in GBP as markets gear-up for the potential of a more-hawkish BoE at the bank’s Super Thursday in August. But should this print at .3% or below, there simply may not be that compelling reason to nudge inflation expectations higher, and the British Pound will likely remain with some degree of weakness.

The forecast for next week will be set to bearish for the British Pound.