U.S. Dollar Primed for NFP after the BOE Unleashes a Bazooka

- This morning brought a series of announcements from the Bank of England as the bank looks to proactively off-set weakness emanating from Brexit. For a full rundown of this morning’s announcements, please check out Christopher Vecchio’s post-announcement analysis of the meeting.

- Tomorrow morning brings another vital data point with the release of U.S. Non-Farm Payrolls for the month of July. After two months of wide divergence in NFP numbers (May a big miss, June a big beat), the U.S. Dollar could see significant volatility around tomorrow’s release.

The big news on the morning is the outsized increase to stimulus taken on by the Bank of England, and this has further driven the ‘sharp decline’ in the value of the British Pound that Mark Carney had warned of before the Brexit referendum. The BOE has become yet another Central Bank in the process of driving dovishness through the economy through the combination of lower rates, larger asset purchases and a passive take towards potential inflationary pressures. One of the few large global Central Banks that isn’t in such a posture is the Federal Reserve, and while the Fed may not necessarily be close to hiking rates in the immediate future, the lack of additional dovishness from FOMC could expose the US Dollar to continued capital flows as investors sell out of currencies that are being driven weaker by monetary policy.

This puts even more focus on U.S. data for signs of growth or potential inflationary pressures in order to focus-in on when we might see that next move from the Federal Reserve. And tomorrow we get one of the more pertinent data points to gauge such a scenario with the release of Non-Farm Payrolls for the month of July. NFP is traditionally a big market mover, but of recent there has been quite a bit of volatility in the data itself. In early-June, May NFP’s printed at an abysmal +38k level versus initial expectations of +160k. Such a stark miss in the headline number fired fears of recessionary pressures in the American economy, and this led to US Dollar weakness as traders sold-out of rate hike bets. But then in early-July, June NFP’s printed at a blowout +287k versus an expectation of +180k; and in the weeks following, we saw additional strength trickle-in to a U.S. Dollar that had already ramped higher on risk aversion-flows after the Brexit referendum.

Going into tomorrow’s NFP report, expectations for the headline print are currently at +175k jobs to have been added to American payrolls in the month of July. Of recent, expectations for near-term rate hikes out of the United States have diminished after last week’s FOMC announcement and then U.S. GDP, and this has brought the U.S. Dollar down to ‘lower-low’ support ahead of the report. 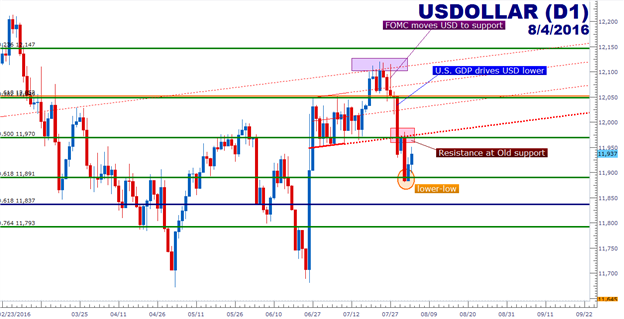 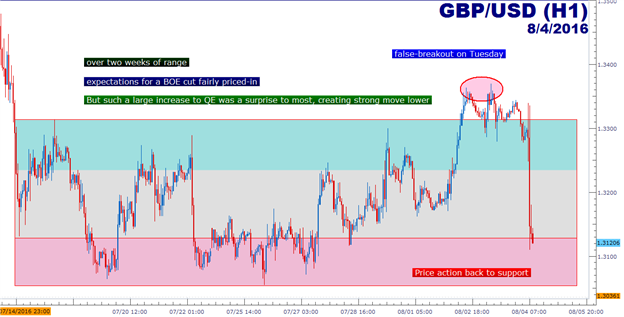 Should NFP print stronger than expectations tomorrow, we’ll likely see additional USD-strength, and this could promulgate a break of support in the British Pound. If support of this range does break, traders will likely be targeting the 1.3000 big figure in the Cable, and should that become eclipsed, the prior price action-lows at 1.2880 and then at 1.2788 become areas of interest.

Another market that’s seen considerable movement of recent on the back of Monetary Policy expectations has been the Japanese Yen. Earlier in July the Yen sold off with aggression as prospects of even more stimulus for Japan ran-higher; and this theme lasted for a couple of weeks as investors attempted to front-run another ‘bazooka’ of policy action. But recent efforts have fallen flat: The Bank of Japan underwhelmed expectations at their most recent meeting, and Tuesday’s Japanese Government Budget indicated far less fiscal stimulus than was originally hoped. This has created a reversal of that prior move of Yen weakness, and this has brought USD/JPY back down to a familiar support level. Earlier this week we discussed this theme and we drew attention to the support zone in the 100.75 area on USD/JPY.

What makes this USD/JPY so incredibly interesting at the moment is the fact that we’re near a very big support level at ¥100.00; and also the fact that Japan likely isn’t done on the stimulus front just yet. The Yen weakness that many were looking for at this most recent BoJ meeting may show-up ahead of the September meeting. On the chart below, we look at the near-term price action structure in USD/JPY, with eyes on the potential for a longer-term 'higher-low' to develop above previously established support. 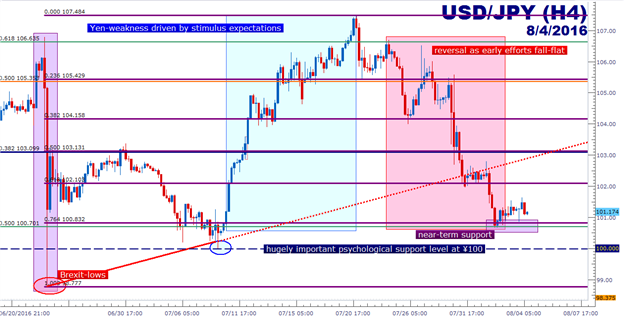