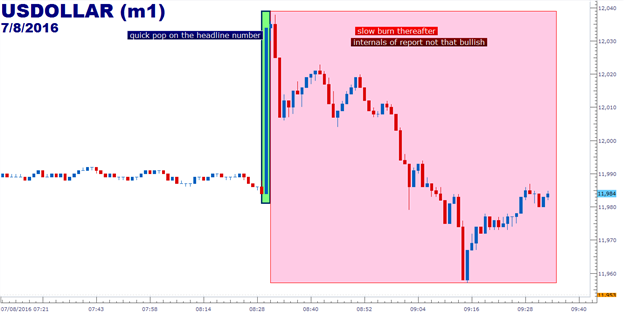 - This morning’s NFP print saw a huge beat of the headline number with +287k jobs added versus the expectation of +180k. But the internals of the report were lackluster, and US rate-hike expectations remained subdued despite the bullish print.

- Strong spikes in USD followed by retracement highlights the fact that markets are keeping very low expectations for rate hikes out of the U.S. Despite the strong beat of the headline number, Gold and Stocks both ran higher as traders factored in even more ‘looser for longer.’

Last month’s Non-Farm Payrolls put in a disappointing miss, and expectations coming into this morning’s print for jobs added in the United States during the month of June were tempered considerably lower. After last month’s print, Chair Yellen noted that the Fed would need to monitor developments in the labor market for fear that the near-term trend of weakness in the US employment may be a sign of something larger. This brought considerable weakness to US rate hike expectations as it became more obvious that the Fed likely wouldn’t be hiking in the face of worsening data. Coming into NFP this morning, the expectation was for +180K jobs to have been added to American payrolls during the month of June, with the unemployment rate expected to tick up to 4.8% from last month’s 4.7% read.

This morning’s data produced a huge beat on the headline number with +287k jobs added during the month of June. The unemployment rate came in above expectations at 4.9% and last month’s NFP print was revised lower by -11k while April got nudged higher by +21k.

While this morning’s headline print blew through expectations by more than +100k, the US dollar failed to substantiate a rally after an initial pop higher. This is likely resultant from the fact that despite this strong headline print, rate hike expectations for the United States remain depressed as investors aren’t expecting the Fed to buck the trend of dovishness in the face of the flurry of global risks facing financial markets at the moment.

Pop and Drop in USD – Headline Number Strong, Internals Not So Much

Of particular importance around the theme of continued Fed dovishness is current price action in Gold. In the immediate aftermath of this morning’s NFP print we saw Gold prices take a dramatic dip lower by 2% in five minutes as such a strong beat initially stoked fears that we may be headed for a return of what happened in May; in which the Fed continued to talk up the prospect of two rate hikes in the remainder of the year. This brought a strong rally into USD for much of the month until we got that abysmal NFP print in early June. But as the internals of this morning’s report were digested, indicating higher than expected unemployment, downgrades for previous months and this is all combined with the risks we already knew about such as Brexit and a continued slowdown in Asia, markets began to price-in that expectation for continued Fed dovishness.

That 2% dip in Gold prices in five minutes was quickly reversed by a 2.6% move higher in the 45-minutes after the print. For traders that are expecting the Fed to continue to remain dovish, long Gold continues to be one of the more attractive venues to voice those weak-USD plays. 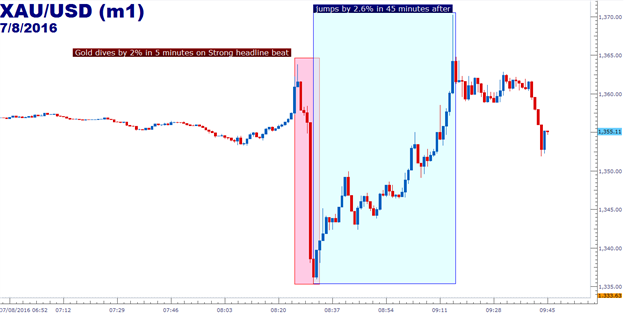 Another area of the market running higher on hopes of even more dovishness from the Federal Reserve are US equities. The S&P 500 has struggled with the 2,120 level for the month of June, seeing two different tests at this level fail with the most recent rejection taking place around the Brexit referendum. This morning’s NFP print bought price action right back towards this prior zone of resistance in the S&P. 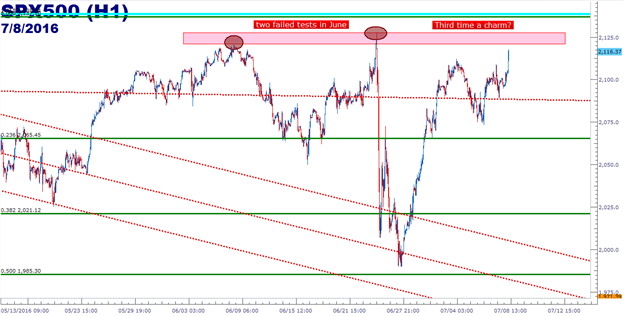 For traders that are looking for bearish setups in US equities, and interesting area to watch at the present is in the Nasdaq100. While the S&P 500 is vaulting higher towards all-time highs, the Nasdaq 100 has been making ‘lower-highs’ for the past seven months. This morning’s price action has vaulted prices in the Nasdaq100 towards the pre-Brexit highs near 4,500. Just a bit higher at 4,531 is a very interesting level, as this is the 23.6% retracement of the most recent major move, as well as the previous swing-high in early June. 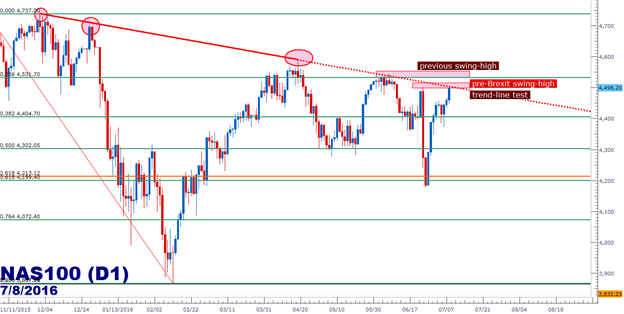