This setup looks to trade a bullish reversal in the U.S. Dollar after today’s FOMC rate decision brought another bout of weakness to an already oversold market. Thursday and Friday of this week bring a series of high-impact data releases out of the United States.

The U.S. Dollar has had a difficult 2017 thus far. After riding into the New Year at 14-year highs on the back of the ‘reflation trade’, matters have turned around considerably as the Greenback has dropped by as much as -9.8% this year. There are a plethora of explanations for this weakness, and many of these reasons make logical sense. Many are expecting this move to continue, and that is where the plot thickens.

Sentiment in the U.S. Dollar has gotten slammed lower as this move has developed throughout 2017. And if few are long and many are short, the motivation for continued losses will likely need to be extremely negative to elicit new even more new sellers into the market. Combine this with the fact that the U.S. Dollar has been flashing oversold readings from a variety of metrics, and I like the odds of looking for a bullish move in the Greenback that could last for a few days to a few weeks or, maybe more.

The quandary that I do face in looking for a USD reversal is one of tactical execution. If looking for a move of USD-strength, one would likely want to look to pair the Dollar up with a currency that’s been relatively weak of recent. This would rule out the Euro, the Swiss Franc and Australian and New Zealand Dollars. As we had discussed this morning, the Japanese Yen and the British Pound could be attractive for such a play; so rather than choosing one and hoping that it works, I’m going to split this trade up in two pieces, looking for USD-strength against both the Japanese Yen and the British Pound. Each setup is described in more detail below.

We discussed the fundamental backdrop behind Sterling in this week’s trading forecast, and with a pivotal BoE meeting on the docket for next week, we have a prime opportunity to see the BoE reiterate a dovish bias to markets. The fuel is certainly there, as last month’s inflation figures came-in below expectations. Cable is currently working on a short-term bear flag formation, so I’m going to look at placing a stop above the high set earlier in July while looking for prices to move-lower. 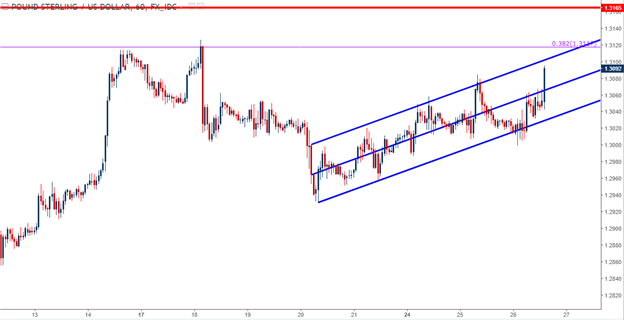 USD/JPY has been tricky of recent, as the bullish up-trend that was so pronounced in Q4 of last year has been rather evasive through much of 2017 as the Greenback has been so abysmally weak. But the BoJ remains passive towards inflation, and they’ve just cut inflation forecasts again; now not expecting to hit their 2% target until 2019. If we do see USD-strength show-up, I expect the Yen to be one of the weaker currencies to pair that theme up with. So, I want this stop below the recent swing-low around 110.50 so that I get taken out of the trade if this theme doesn’t show promise.

After the July FOMC statement, USD/JPY moved-down to test the bottom of the ‘big picture’ support zone that spans from 111.61-112.40, and this opens the door to bullish exposure in USD/JPY. 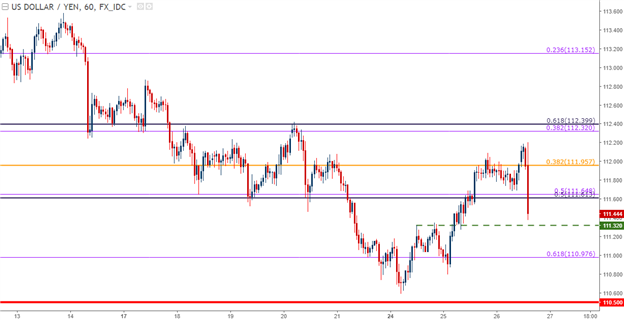