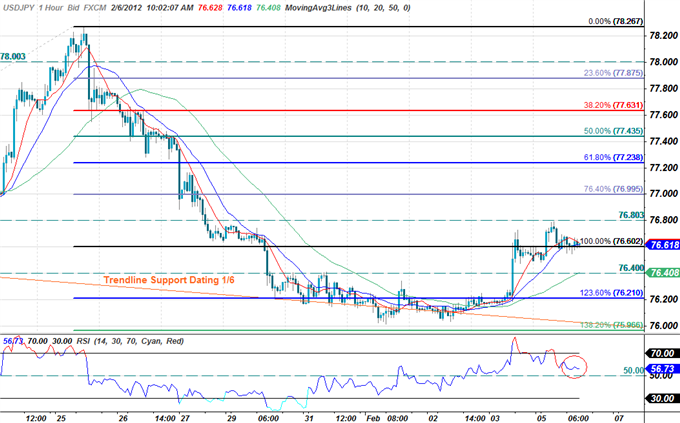 The yen is the top performing currency against a stronger dollar at the open with the pair advancing a meager 0.04% on the session. Risk appetite is on the defensive at the start of the week as a lack of progress regarding Greek negotiations continues to weigh on broader market sentiment. Accordingly, lower yielding “safe haven” assets have remained well supported here with both the dollar and the yen benefiting from classic risk-off flows. The yen is stronger against all its major counterparts save the dollar which continues to outpace yen advances as traders seek refuge in the world’s reserve currency.

The pair broke back above the 100% Fibonacci extension taken from the December 22nd and January 25th crests at 76.60 in overnight trade before rebounding off soft resistance at 76.80. Interim support holds at 76.60 with subsequent floors seen lower at 76.40, the 123.6% extension at 76.20, and the convergence of the 138.2% extension and trendline support dating back to January 6th at the 76-figure. Topside resistance holds at 76.80 with a breach here eyeing targets at the 76.4% extension at the 77-handle, the 61.8% extension at 77.24, and 77.45. Note that advances in the yen are likely to remain tempered against the dollar as concerns regarding possible intervention form the Japanese Finance Ministry continue to loom. 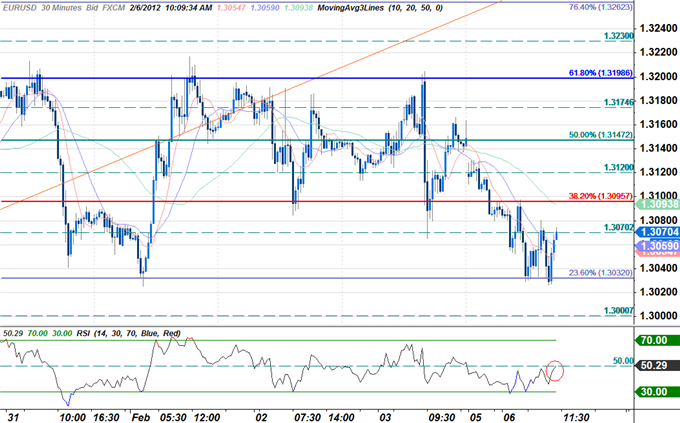 The euro is the weakest performing currency against the greenback in early US trade with a decline of nearly 0.70% on the session. The single currency has remained under pressure as Greek negotiations continue to tread water with EU leaders calling for Greece to implement further austerity measures in order receive the €130 billion bailout tranche. As the nation struggles to ease investor concerns regarding a possible disorderly default, the single currency remains in limbo with seasonality trends suggesting the euro may remain under pressure early in the month after the pair failed multiple attempts at holing above the 1.32-figure.

The EUR/USD broke below the 38.2% Fibonacci extension taken from the January 15th and 25th troughs just below the 1.31-figure before encountering support at the 23.6% extension at 1.3030. We continue to favor the short side at these levels with a break below interim support eyeing subsequent targets at the 1.30-figure, 1.2970, and the January 25th low at 1.2930. Soft resistance holds at 1.3070 with a breach here eyeing intra-day topside targets at the 1.30-handle, 1.3120, and the 50% extension at 1.3150. Investors will be eying data out of Europe tomorrow with the December French trade balance and German industrial production data on tap.