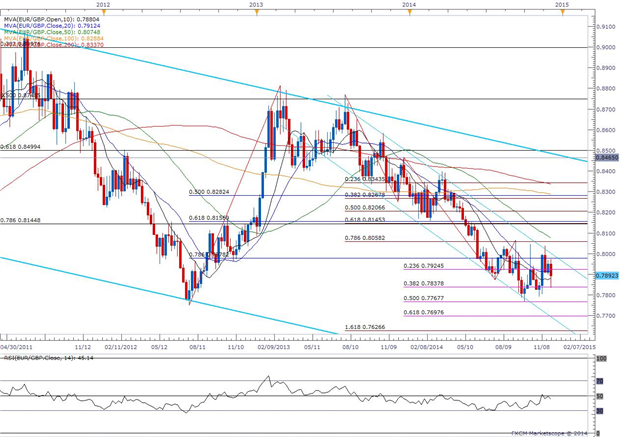 The growing deviation in monetary policy continues to foster a bearish outlook for EUR/GBP and EUR/CAD as the European Central Bank (ECB) struggles to achieve its one and only mandate for price stability. Nevertheless, the Bank of England (BoE) remains on track to raise the benchmark interest rate in 2015 as the central bank anticipates a faster recovery in the U.K, while the Bank of Canada (BoC) may come under increased pressure to further normalize monetary policy amid the stickiness in price growth.

EUR/GBP remains poised for a further decline in 2015 as it preserves the bearish trend carried over from back in 2009. We will continue to look for a series of lower highs & lows in EUR/GBP as BoE Governor Mark Carney prepares U.K. household and business for higher borrowing-costs while the ECB keeps the door open for additional monetary support. With that said, EUR/GBP may make a more meaningful run at the 2012 low (0.7750) in the year ahead, and we will continue to favor the downside targets in 2015 as the fundamentals and technicals point to a further decline in the exchange rate. 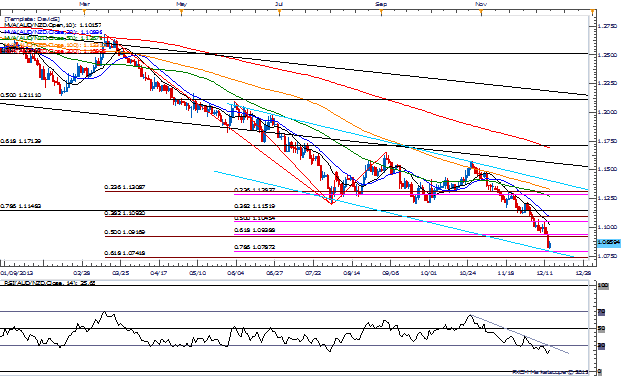 After carving a head-and-shoulders top in 2014, the key reversal in EUR/CAD should continue to take shape in 2015 as the Bank of Canada scales back its dovish tone for monetary policy. Indeed, the BoC may follow the Fed and show a greater willingness to raise the benchmark interest rate next year as inflation holds above the 2% target, and Governor Stephen Poloz may continue to change his tune over the near to medium-term as the central bank head sees a broadening recovery in Canada. With that said, we will continue to look for a series of lower highs & lows in EUR/CAD and favor the downside targets especially as the fundamental outlook for the euro-area remains clouded with high uncertainty.