- Final US event risk for the week with two important data prints.

The UK economy grew by +0.8% q/q in the 3Q’13 and +1.5% y/y, yet signs of accelerating growth over the course of 2013 have done little to boost enthusiasm for the British Pound. At the time this report was being written, the GBPUSD was only up by +0.02% on the day and had started to fade the initial gains seen after the GDP report was released, suggesting that a near-term top in sentiment may have been reached.

Indeed, with the actual figures hitting their forecasts on the nose, upside was limited in the wake of the release and the GBPUSD came under pressure within the first several minutes. In context of a moderating flow of UK economic data over the past two months – the Citi Economic Surprise Index has declined to 41.90 today from a yearly high of 113.30 on August 13 – there may be few buyers left at these levels.

GBPUSD Daily Chart: May 2013 to Present 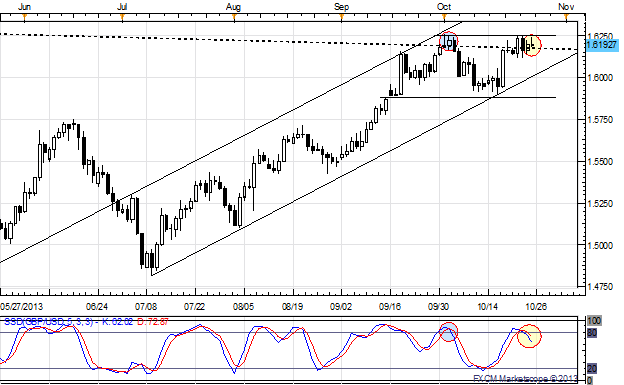 A look at the GBPUSD daily chart may suggest a similar near-term outcome. The GBPUSD recently traded back at the top of its 4Q’13 highs below $1.6250, and the reaction to today’s UK GDP data failed to produce a piercing of said highs.

Accordingly, the last time price attempted to pierce these levels in early October, successive failures coinciding with a turn in the daily Slow Stochastics (5,3,3) led to a pullback to the rising trendline off of the July and October lows. Should incoming US economic data today ‘weather the storm’ – Durable Goods Orders (SEP) and U. of Michigan Consumer Confidence (OCT F) both offer elevated event risk – a turn lower in GBPUSD may begin.

A drop lower may be limited, however, with the Federal Reserve’s policy meeting next Wednesday, in which it is widely expected that QE3 will be left on hold at $85B/month. This also may pave the way for QE3 to continue into 2014. Accordingly, we believe that near-term support on the rising midyear TL is likely to hold near 1.6000/30 over the coming days.