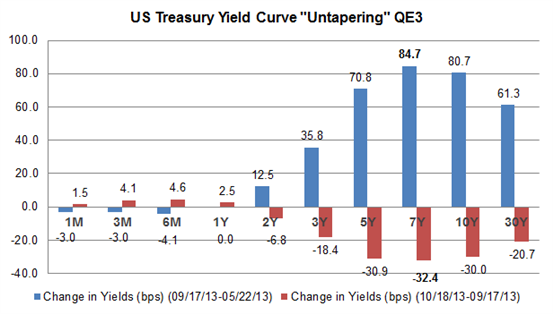 - US Treasury yield curve continues to flatten, although at a slower pace – still considered USD-bearish.

- US event risk heavy next week as data backlog is resolved; September NFPs on Tuesday.

The US Dollar is the worst performing currency for the second day in a row as market participants continue to price in another non-taper at this month’s Federal Reserve policy meeting. This shift in sentiment has been confirmed by price action in the US Treasury yield curve, where the “belly” – 3- to 7-year notes – has seen yields fall faster than either the short- or long-end.

This is important to consider because the exact opposite situation developed between May 22, 2013 (when Fed Chairman Ben Bernanke noted at a Congressional testimony that the Fed could taper QE3 in the next few meetings) and September 17, 2013 (the day before the September FOMC meeting). The chart below illustrates this point:

Whether or not changing dynamics of the US Treasury market continue to weigh on the US Dollar is up in the air, however, now that the US government shutdown has ended. All of the US economic data that was withheld since October 1 will be released over the coming days, providing an extra spark of event-driven volatility. Bond and FX traders should pay particular attention to the calendar on Tuesday, when the September Nonfarm Payrolls report will be released.

For now, “untapering” is occurring in the wake of the US debt deal, and the expectation of prolonged ultra-loose monetary policy from the Fed is helping the commodity currency bloc post the largest gains against the US Dollar thus far on Friday. Also helping the Australian and New Zealand Dollars has been a slew of confirmed-stronger GDP figures from China in the 3Q’13 (although upside has been limited possibly due to the fact that markets may doubt the accuracy of GDP data released just 10 days after the quarter ended).