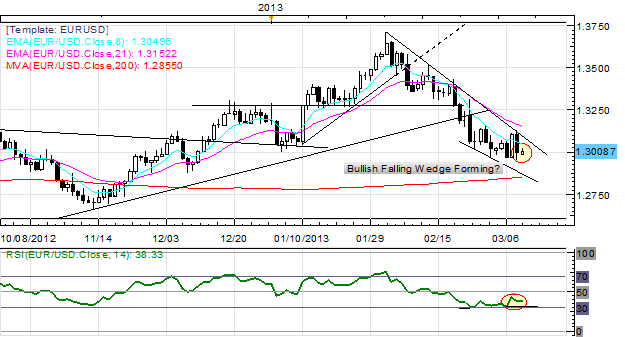 The majors have traded in a tight range against the US Dollar on Monday as market participants in Asia and Europe take the opportunity to digest Chinese data from the weekend as well as the US labor market data from Friday. But a second glance at the US labor report on Friday may not yield the same exuberant reaction seen the first flyby.

True, the US economy continues to exhibit signs of improvement: the February NFP report showed the US economy added +236k jobs; and the Unemployment Rate dropped to 7.7%, the lowest since December 2008. Unfortunately, the participation rate fell – a sign that the labor pool may be shrinking – to 63.5% from 63.6%. Instead, the February report will likely be perceived by the Federal Reserve as another step in the right direction, but not great enough to warrant a reconsideration of the current pace of QE3. For now, the Fed will continue its $85B/month in asset purchases as planned.

On the Chinese data front, inflation data from February showed that prices pressures increased at a faster than expected pace, a curious development considering officials have been tightening policy ever-so-slightly the past few weeks. This could mean a weaker Chinese consumer could be around the corner: February Retail Sales disappointed at +12.3% y/y from +14.3% y/y, versus +15.0% y/y expected. Soft Chinese data could pave the way for commodity currencies’ weakness in the near-term.

In Japan, incoming BoJ Governor Kuroda was on the beat earlier raving about the efficacy of dovish monetary policies, saying that the BoJ would do whatever it takes to “keep the 2% [inflation target] after achieving it,” noting that “monetary easing tends to weaken” the Yen; expect further downside for now.

There are no significant events on the economic calendar for the US trading session on Monday. 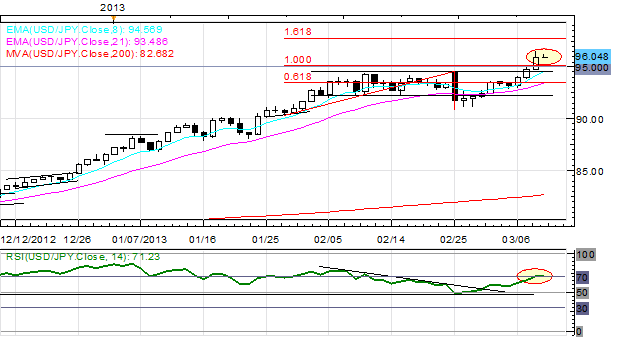 USDJPY: I maintain: “The USDJPY has set fresh highs for the year, as the RSI breakout on 2/28 was the cue for further strength. As US equity markets have hit fresh all-time nominal highs, the USDJPY finally confirmed, on the back of a widening 2s10s Treasury spread (exactly what I’ve been waiting for). Accordingly, the Bull Flag consolidation now points towards 97.70 as the next key area higher.” Progress has been made towards this target, although with an Inside Day forming, it is possible we could see some consolidation/downside price action before the move higher. 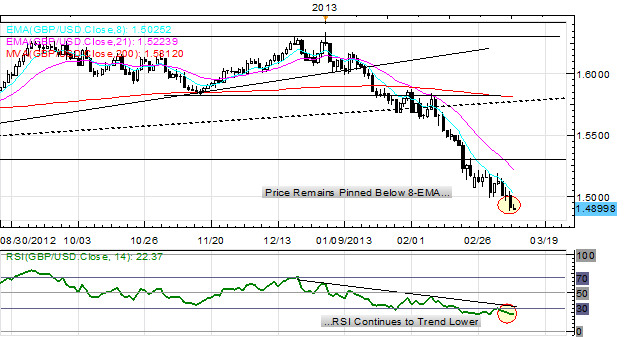 GBPUSD: I maintain: “With the ascending trendline off of the 2009 and 2010 lows breaking, as well as the 2010 to 2013 range bottom lows breaking near 1.5300, my bias is to sell rallies. Like the EURUSD, the GBPUSD is consolidating just near its 2013 lows, but has failed at its 8-EMA as it has for the past several weeks, suggesting that the next leg lower may be on the verge of occurring.” Another failed run at the 8-EMA late last week has pushed the GBPUSD towards new yearly lows, with the first major support coming in at 1.4780/800 (March 2010 swing lows). 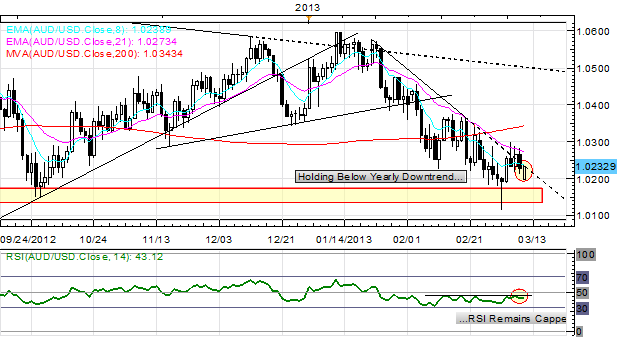 AUDUSD:Last week I said: “The daily RSI remains capped below 50, as it has been during the duration of the downtrend. Now would be the time to look short again; however, a break of this RSI barrier, and a daily close above 1.0230/50 would negate the near-term bearish bias. The next level to look higher towards would be 1.0340/80 (mid-February swing highs); a continuation lower eyes a move towards 1.0090/1.0120, then 1.0000.” The first reported RSI break was a fake out, as it has held below 50 while the downtrend off of the January 22 and February 20 highs has been maintained. Still, with consolidation above the March low, a close above 1.0230/50 today would shift near-term focus towards 1.0340/80. 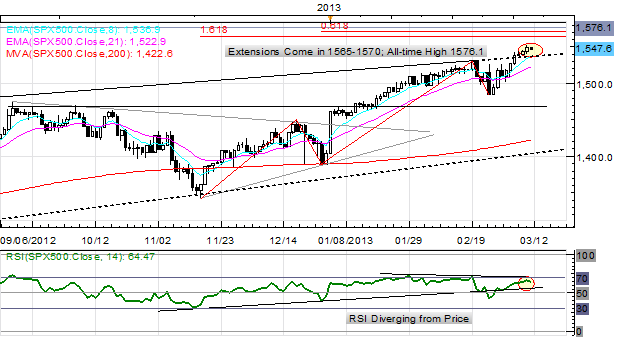 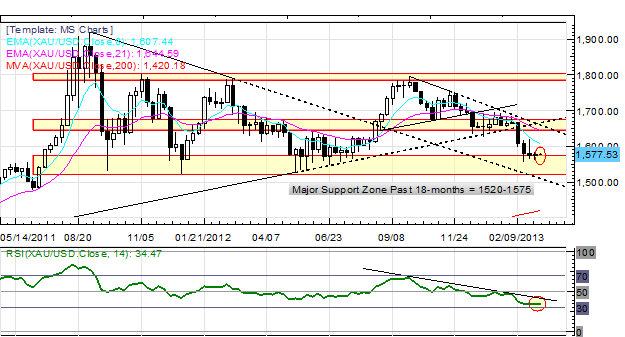