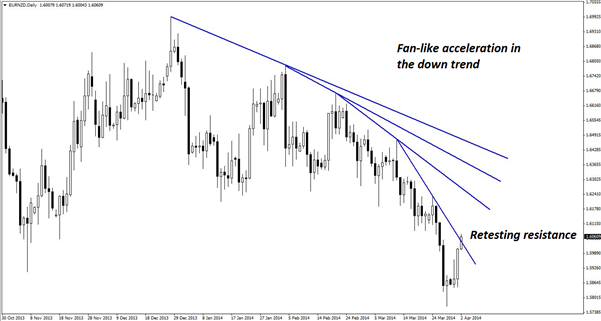 EUR/NZD Trade That’s All About Momentum

Kaye Lee is enjoying holiday for the coming week, and new articles may appear infrequently during this time. The normal publication schedule will resume shortly after April 10.

Quite a few of the FX cross pairs are now showing extended pullbacks on their respective four-hour charts. This often poses some issues, and although the principles of charting will still apply, there is evidence of countertrend momentum under these circumstances.

Such countertrend momentum is evident on the below daily chart ofEURNZD. Price has come back to retest the shortest-term declining line of resistance after exhibiting accelerating downward momentum since late-2013. While the recent pin bar suggests that a short-term bottom may be in place, a test of the low would easily present a move containing 200 pips or more to the downside.

In addition, it is always wiser to trade in the direction of the trend, and the bearish pin bar from two days ago suggests that bears are still present, although they may have lost some of the prior momentum.

The four-hour chart below clearly shows the momentum-based pullback mentioned at the beginning of this article, with six or more recent candles being consecutively bullish. Whenever this occurs, there are two opposing views to be had:

Both types of logic are valid, and it is a simply a matter of perspective. While it is undeniable that there is countertrend momentum present in EURNZD, the fact remains that there is a very solid trend present on the daily chart. As a result, it is still wiser to trade with the overall trend, but to also account for the countertrend momentum by allowing for a larger zone of resistance. 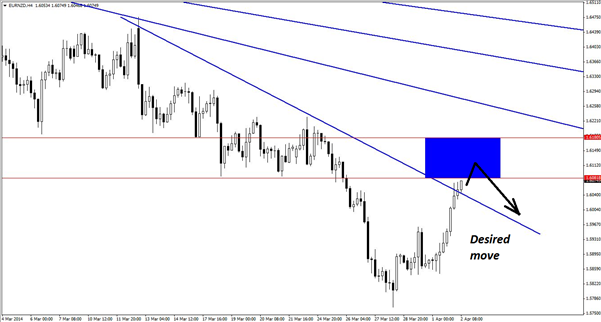 This resistance zone is readily obtainable using previous horizontal consolidation to the left on the chart. It is estimated as 1.6081-1.6180, a risk zone that is 99 pips deep. While sizable, this is still sufficiently small enough to provide reasonable risk profile if EURNZD does head down to retest the low, or continues the prevailing downtrend.

The hourly chart below shows the recent bullish momentum even more clearly, but also provides hope in the form of an Elliott wave count. A standard five-wave advance should bring price squarely into the resistance area indicated. At the time of writing, however, wave 3 was still somewhat unclear. 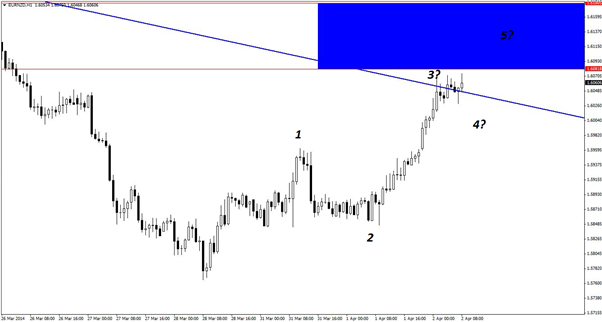 Traders who are more pattern-based may decide to wait for this final confirming pattern sequence to complete before engaging with this trade, as the fifth wave usually gives way to a significant top.

For those who are more willing to build the trade on principles of support and resistance, however, short positions can be taken once price reaches the blue zone of resistance and begins to show bearish signals including reversal divergence, pin bars, and/or bearish engulfing patterns. As usual, two or three tries may be required to hop on to the downward move.

One clear area of resistance that may become support is at the top of wave 1, as marked. If and when price comes back down to retest that area, a reaction off that zone may create a continuation of the move up, and thus, trades should be manages according to how price develops while in this area.