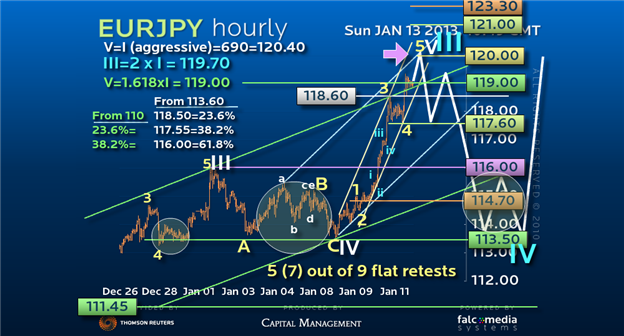 * Euro Yen remains within an aggressive uptrend displaying a consistent pattern of correction and trend.

* As an imminent spike of 120 suggests the uptrend will be mature, we are exiting longs and selling strength.

* There are clear levels to confirm a correction has started and where it ends and therefore when it will be safe to rebuy.

Euro Yen remains within an uptrend with no major correction so far to the outstanding but now conservative 123.30 target as highlighted in this weekend’s big picture vision. Indeed having powered through the 116 high to provide 119 (1.618 extension) in quick order there is opportunity to extend the major third wave even further to (2x Wave one) to 119.70 possibly an aggressive 120.40. But we can't justify longs at this level any more given the mature (5 wavish) nature of the uptrend from the secondary 100.30 low. The question then becomes the type of correction and how we know its started and when it ends.

Since the 94 low there have been 9 corrections larger than 100 pips 5 if not 7 have produced flatt(ISH) corrections. In the last month all 3 100 pip plus have been this same type producing a thrust approximately twice the size of the correction alsoi therefore suggesting a final spike above 120.

Now this is the beauty of this situation. As given the possibility of repeating the same type of correction we can wait until it sets the first low and holds the retest wherever that maybe.

Further videos or commentaries are available from ww.marketvisiontv.com or @EdMatts on Twitter.