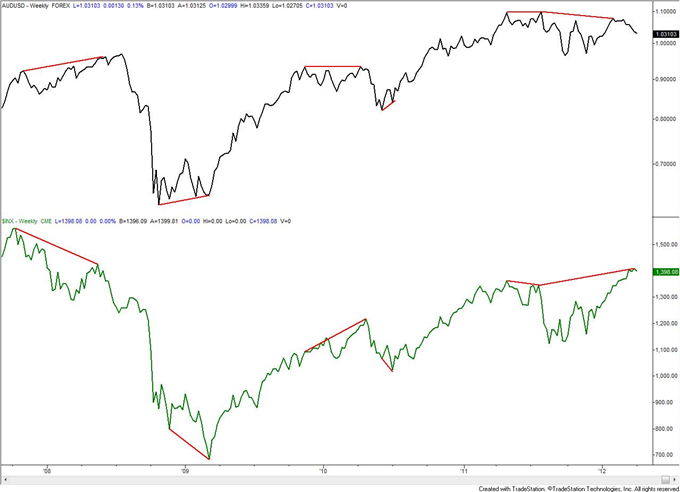 Can You See the Foundation for the Next US Dollar Bull Market?

-PriceRank is the percentile rank of the last daily close compared most recent 250, 60 and 20 daily closes (100=highest close and 0 = lowest close)

Jamie – I’m republishing this chart from last week and will likely revisit it when applicable. “The AUDUSD turned lower in March while the S&P 500 traded to nearly 4 year highs. The striking divergence has preceded significant trend shifts in recent years.” 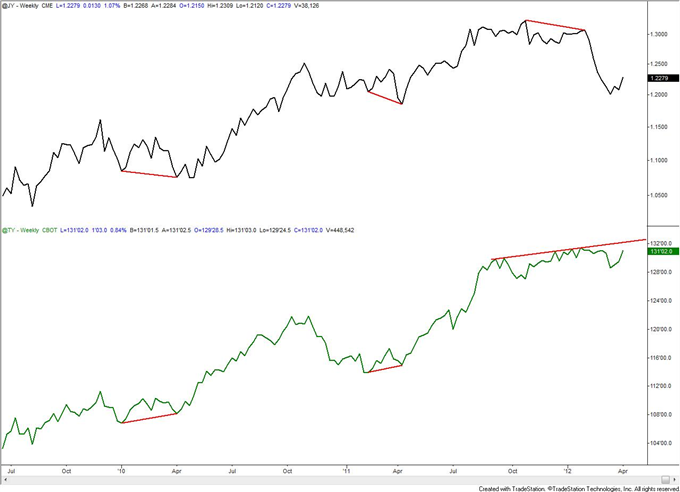 Jamie – I mentioned this on Twitter on Friday (@JamieSaettele); here is the visual. A new high in the 10 year note (and probably the entire treasury complex) is most likely not going to be coincident with a new high in Yen (new low in USDJPY). This divergence will help in timing the next USDJPY long (short term USDJPY pattern is actually suggestive of a low near/at current levels). 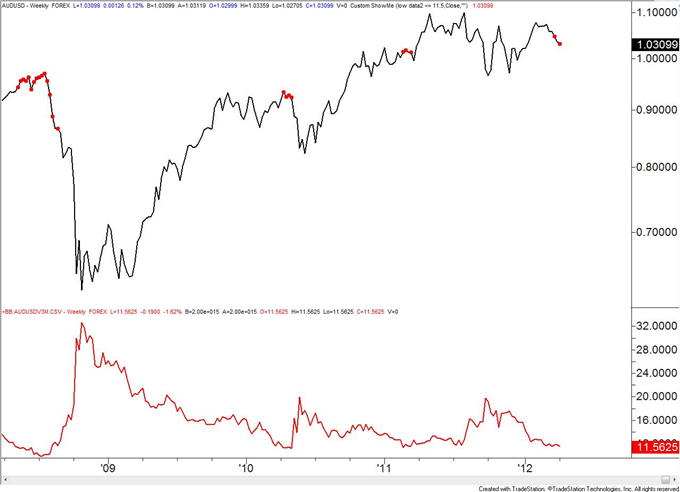 Jamie – Red dots indicate when 3 month implied volatility has been 11.5% or lower. Notice that as the AUDUSD has declined from its late February high, volatility has NOT increased significantly. This dynamic leaves the current situation more similar to the decline from the 2008 top (financial crisis) rather than the decline from the April 2010 top (flash crash). A ‘real’ bear market begins with a gradual decline and evolves into a panic. A panic style decline right off of the top is not to be trusted. Also, the difference between commercial and speculative positions (COT) at the most recent top was the most extreme since the 2011 top. 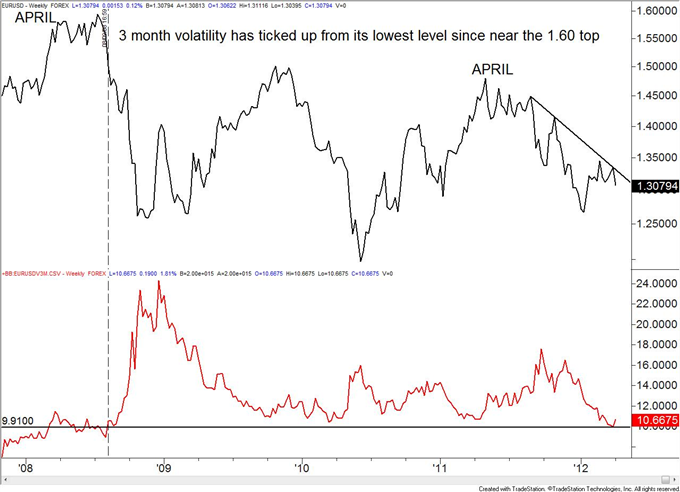 Jamie – 3 month implied volatility in the EURUSD just ticked up from its lowest level since August 2008, when price was in the early stages of its descent from 16000. The rally into the early April high was turned away by the trendline that extends off of the August and October tops. 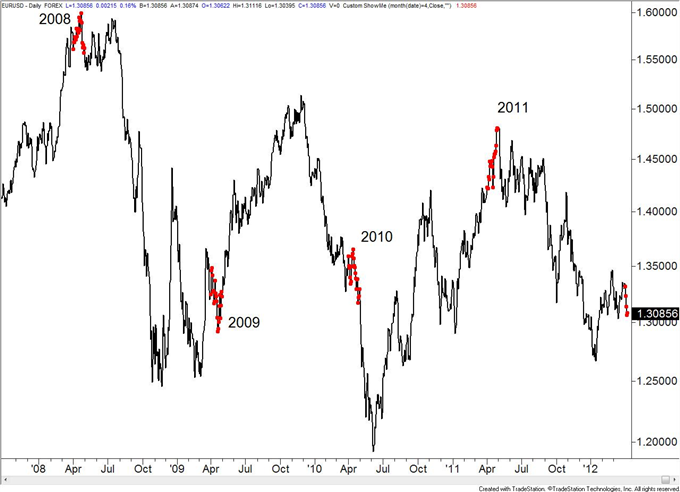 Jamie – April has served as a pivot since 2008. Tops formed in 2008 and 2011 (was retested in 2008). Price declined in 2009 but into a secondary low. Price declined in 2010 and plunged into the June low. Price is declining in 2012. Structure at multiple degrees of trend (corrective rally from the January low and impulsive declines from the February and March highs) suggests that April 2012 may prove to be the most important and bearish pivot of all. 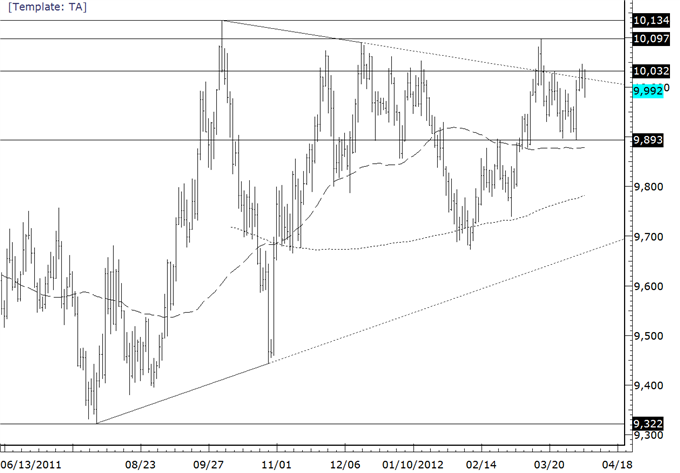 Jamie – The Dow Jones FXCM Dollar Index (Ticker: USDOLLAR) advance stalled at resistance from the 3/22 high (10032). Breaks above 10097 and 10134 are expected in the coming weeks. Reasons to turn bullish ahead of the break include alignment of moving averages (shorter above longer) and daily RSI action, which continues to bounce from near 50 (a bullish characteristic). Today’s drop below 9997 may complete a flat correction from 10037. I’m bullish against 9893 in anticipation of a break above 10134. 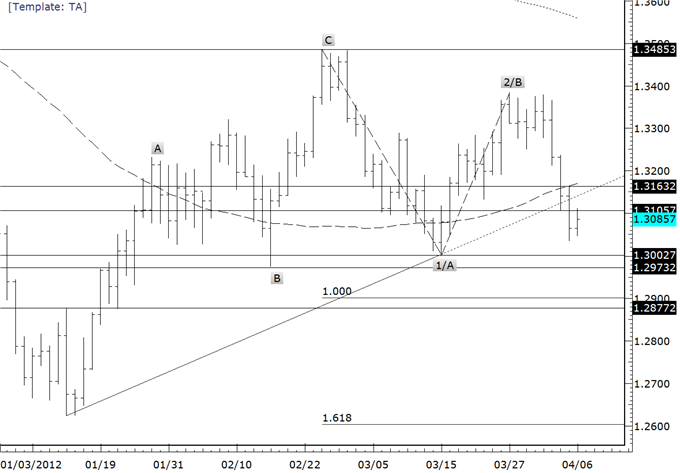 Jamie – Last Friday’s commentary was that “one can make a case that the decline from 13485 and advance from 13003 composes waves 1 and 2 of the next bear leg. That may be the case but from a trading standpoint I would wait until next week before doing anything. Aside from being important with respect to price extremes (highs/lows), a new month sometimes triggers a change in market conditions as well.” April has ushered in a change in trend and conditions. The plan should be to short rallies. A move back to 13165-13210 can’t be ruled out but watch the underside of the freshly broken January-March trendline for resistance at about 13150 Monday. As always, watch the European open for intraday turns.

Joel – A break of some multi-session consolidation is significant in the short-term and could now open the door for deeper setbacks over the coming sessions. The latest break and close below some key short-term support at 1.3250 highlights this fact, and now exposes a fresh drop towards medium-term support by 1.3000 further down. Back above 1.3400 would be required to negate bearish outlook and put pressure back on topside. However, the market is well supported in the 1.3000 area and it will take a meaningful break below to convince us of continued bearish price action to challenge the 2012 lows in the 1.2600’s. 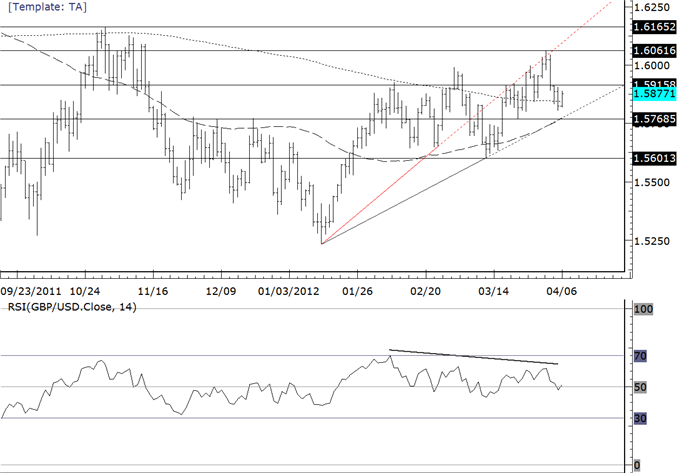 Jamie –The ‘reliable’ divergence with RSI on the daily (reliable in that RSI is not even close to 70) and this week’s key reversal (new 13 week high, close below prior close and large relative range) is suggestive of an important top. The short term pattern can’t be much cleaner either; the decline from 16062 is in 5 waves and the post NFP bounce is nearing resistance (15910/50). Favor shorts into resistance against 16062 towards the March low at 15600.

Joel – Failure to establish any fresh momentum following the break above 1.6000, followed by an aggressive bearish reversal now suggests that the market could finally be looking to carve a top in favor of a more significant decline over the coming sessions. Look for a break and close below next support at 1.5830 to reaffirm outlook, while back above 1.6065 would be required to negate. 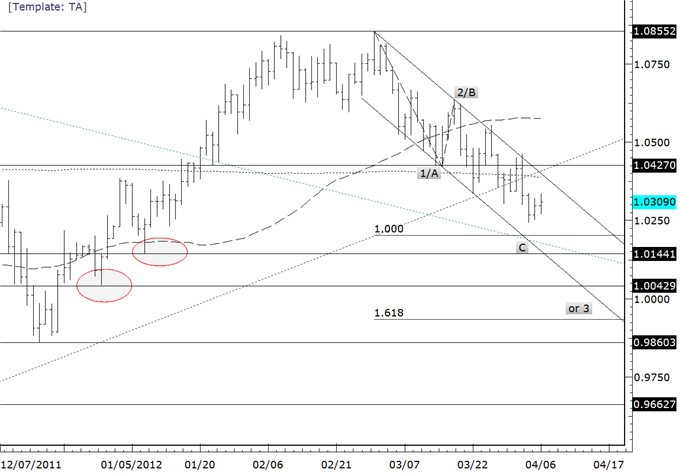 Jamie – Focus remains on the year to date low at 10145. A break below the channel would suggest that a 3rd wave impulse is underway towards December pivots at 10043 and perhaps 9860 (161.8% extension is in the middle of those levels but I place more importance on prior pivtos than Fibonacci). 10350 is resistance. I’m bearish against 10462.

Joel – Our bearish outlook in this market is being reaffirmed with the latest pullback and we continue to project deeper setbacks over the coming days and weeks back below parity. A fresh lower top now looks to be carving by 1.0465 but only back above 1.0640 would delay and give reason for concern. From here, look for the latest break below 1.0300 to open the next downside extension towards 1.0000 over the coming sessions. 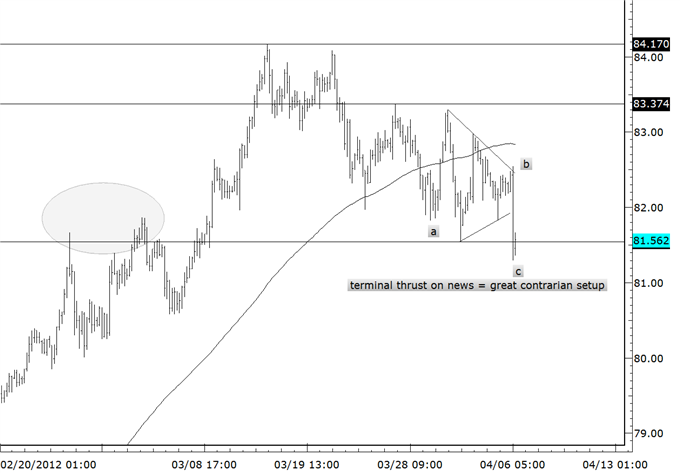 Jamie – Commentary from yesterday; “A correction of the February-March run is unfolding. Precise proclamations regarding pattern and levels are impossible when corrections are at their midpoint due to the multitude of potential outcomes (corrections can take many forms). As such, it is enough to say that a correction is unfolding. 8060 (March low) is a level to watch in April for support. Price is testing resistance at 8240 now.” Precision regarding levels and pattern is warranted now that the correction has taken on an identifiable form, specifically an A-B-C corrective decline. Wave B is a triangle and the NFP print triggered the terminal thrust in wave C. Evidence is sufficient to warrant longs again. Strategically, look for lows early in the week and early in Asia trading.

Joel – Has been locked in some consolidation since the market broken to fresh 2012 highs beyond 84.00 with technical studies unwinding from overbought levels before consideration is to be given for the next major upside extension. The key levels to watch above and below come in at 84.20 and 81.50 and a break on either end will be required for clearer short term directional bias. However, given the bullish breakout in 2012, all signs point to a major structural shift which favors additional upside beyond 84.20 and into the 85.00-90.00 area further up. Ultimately, only back under 80.00 would give reason for concern. 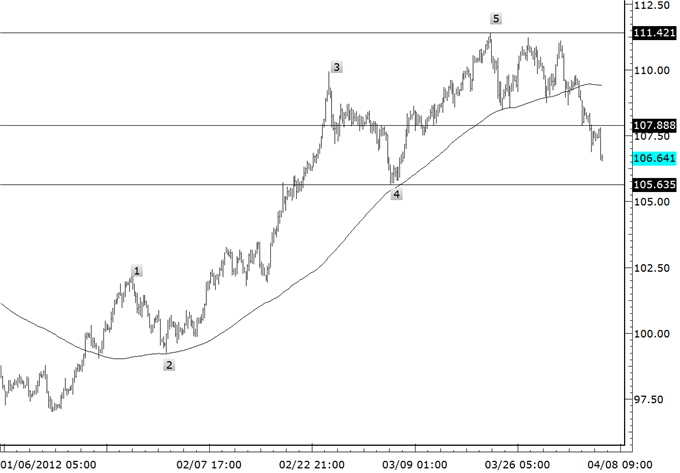 Joel – The market is finally in the process of correcting following the latest surge to fresh 2012 highs just over 111.00. From here, we see risks for further weakness towards the 105.00 area, but ultimately any additional setbacks should be well supported in favor of a resumption of the newly formed bullish trend. We contend the cross has carved a major cyclical bottom and the longer-term risks from here are for continued strength. Only back under 102.00 would delay outlook and give reason for concern.