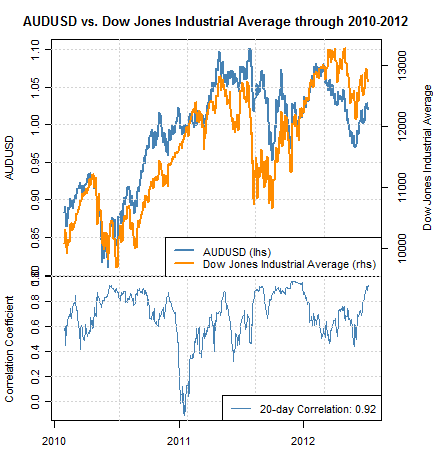 Interest rates help explain why the Australian Dollar remains so strongly correlated to the Dow Jones Industrial Average, and we expect relatively stable yields to keep the strong link intact through the foreseeable future.

Australia boasts the highest domestic interest rates of any G10 currency, while the US Dollar (ticker: USDOLLAR) sees yields near record-lows of zero percent.

Interest rate traders predict that the Reserve Bank of Australia may cut domestic rates by as much as 90 basis points (0.90%) in the coming 12 months, but that would nonetheless leave the AUDUSD with significant differentials.

As long as that yield spread exists, we expect the Australian Dollar will remain correlated to the Dow Jones and other indices.

The correlation between the Australian Dollar/US Dollar and the Dow Jones Industrial Average trades near record strength, as a 20-day study shows that Dow moves can explain 85% of AUDUSD volatility and vice versa. The Aussie’s especially strong link to equities underlines its sensitivity to financial market sentiment and makes it an attractive proxy to holding positions in the Dow and other indices.

Why has the Australian Dollar been so closely correlated to the DJIA? Australia boasts the highest domestic interest rates of any G10 currency, and said fact has made it especially attractive to yield-seeking investors. In practice this means that investors may borrow lower-yielders such as the US Dollar (ticker: USDOLLAR) to fund investments in the Australian currency. That trade may do well if the AUDUSD exchange rate remains stable or appreciates, but any risks of sharp declines will quickly erase any returns on yields.

Yield differentials make the Australian Dollar/US Dollar exchange rate especially sensitive to shifts in financial market risk sentiment and help explain why the AUDUSD is so closely correlated to the Dow Jones. We expect this link to remain strong as the Aussie Dollar is likely to retain its yield advantage as US interest rates remain near record lows.