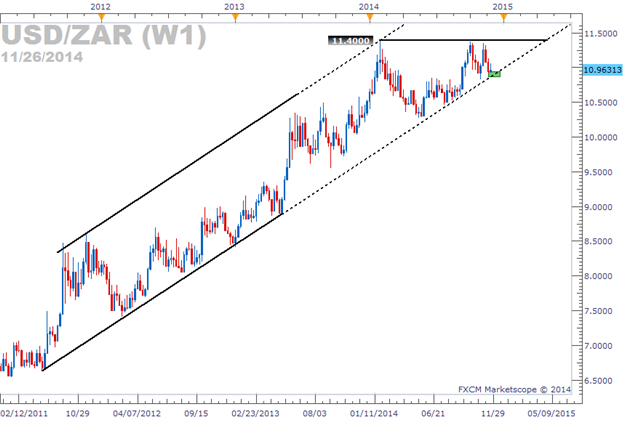 The South African Economy has continued to advance in the week following the SARB’s decision to retain their current repurchase rate of 5.75%. In succession with the GDP and Business Confidence reports, components of the Leading Indicator also illustrate positive economic developments.

Business Confidence in Q4, as reported by the Bureau of Economic Research, improved by 5 points to reach 51—the first positive reading since 2013. With a 13 point jump in the building and manufacturing component, just over half of those firms surveyed are content, finding the prevailing conditions conducive for conducting business. Furthermore, retail, the only category to decline, remained above the pivotal 50 level at 55. Successive improvements in the BER will likely serve as a precursor to additional growth in real GDP in the final quarter of 2014 and into next year.

According to the BER, economic growth is on track to reach 2.5% in 2015. Already showing an improvement was third quarter GDP which came in at 1.5% for an increase of 0.4%. While manufacturing contracted by 0.4% positive contributions came from the business services and real estate industries as well as the agriculture, forestry and fishing sectors.

While the leading indicator decreased 0.7% on a month-to-month basis in September, half of the ten components increased, those most notable being average hours worked in manufacturing, volume of manufacturing orders and the number of passenger vehicles sold. At 99.8, September’s index falls just a notch below the year’s average of 99.9. In conjunction with the leading indicator, the composite coincident business cycle indicator- representing the present state of economic growth- increased by 1.1% in August.

In line with favorable developments the USDZAR is approaching price channel support after attempting to break 11.40 multiple times. However, it might be best to stay on the sidelines until we see a clear break below this price channel or until 11.40 is indeed broken.