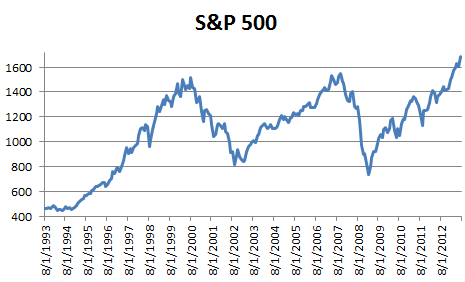 Fisher and Evans Comment on the Taper, Will the Market Wait?

Following comments from known-hawk Dallas Fed President Fisher yesterday, Chicago Fed President Evans offered his own assessment of the path of stimulus and eventual Taper. While it remains a theme that FOMC members are concerned about disinflation and downside risks to economic activity as well as financial health, both Fed Presidents have offered remarks that show they suspect current levels of low inflation to be simply transitory/temporary. Nevertheless, the inflation debate weighs heavily on any decision on the Taper time frame for Evans according to his commentary.

It was stated in Mr. Bernanke’s last press conference that any reduction in asset purchases would be debated in the context of incoming data. Although recent non-farm payrolls were less than expected, trade balance data this morning had its best print since the fall of 2010 while job openings in the U.S. have maintained a slow yet steady uptrend. Nevertheless, markets continue to be lost in ‘Fedspeak’ – unable to determine whether there is enough support for a September easing of QE3 or not.

Although the function of these FOMC member speeches has been to essentially calm the waters, markets are showing greater complacency and uncertainty amidst the confusion in a lack of a clear consensus. While the central bank and its members have gone through great pains to reassure that a easing back on the open-ended stimulus program is not a move to ‘tighten’ monetary policy (such as a rate hike), the use of leverage and positioning in excessively risky assets over the years means speculators are just as interested in the Taper as they are the timing of the first rate hike. With the S&P and DJIA hitting and closing at all-time highs over the past couple weeks, today’s pullback shows a market that is capricious and lacking confidence in the mature bull trend.

Keeping track of the future catalysts for Taper speculation, Wednesday’s session brings another round of central banker commentary. The Fed’s Plosser and Pianalto (both lean hawkish on QE but neither is a voter) are due to speak (see more scheduled US event risk at the DailyFX Economic Calendar).

Looking further out to establish a time table, the central bank’s final three policy meetings this year will be assessed for the timing for economic data to evolve as well as the planned updates. The September meeting was pegged as the most likely meeting to begin the Taper after the June FOMC meeting initiated the ‘QE3 may be reduced staring later in 2013’ because it is one of the quarterly meetings where forecasts will be updated and Chairman Bernanke will hold a press conference.